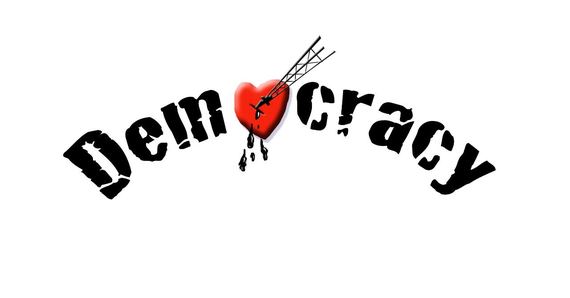 Ironically, the oil and gas front groups pushing Colorado Initiative 71 assert that outside special interests are "polluting" Colorado's Constitution. Corporate lobbyists led by oil and gas represent the largest wealthy special interest. These modern-day robber barons who control our statehouse are spending millions of dollars to target the people's last vestige of democracy, the Citizen Ballot Initiative, in order to place it out of reach for all but the wealthy. Corporate backers of "71" were able to spend over $915,000 for signature gathering alone, paying an average $5 per signature. Among oil & gas front groups, Coloradans for Responsible Energy Development (CRED) is financed primarily by out-of-state headquartered Anadarko and Noble Energy, investing millions of dollars to conduct a "decline to sign" campaign, paying some folks $25/hour to dress up like pencils and otherwise harass and intimidate signature gatherers and signers of anti-fracking measures.

Not satisfied with overturning direct democracy, oil & gas front groups that dominate our government even boast of taking over many local city councils.

The corporate elites behind Initiative 71 follow the playbook of the American Legislative Exchange Council (ALEC), responsible for decades of model legislation creating policies that effectively transfer wealth upward. Their ultimate policy goals are the subversion of democracy and to ensure unlimited campaign spending in service of the corporate bottom line. ALEC and their corporate funders seek suppression of voter participation, state preemption of local laws and the crushing of direct democracy by placing the ballot initiative process out of reach for all but the wealthy. Following ALEC's prescription, Initiative 71 proponents seek to make it impossible to qualify a ballot initiative without boatloads of money, and the requirement of a super-majority vote for passage.

Behind false assertions that Colorado has the "easiest process in the U.S. to amend the state constitution" are corporate and political operatives like Josh Penry, at the center of a web of high-rolling oil and gas front groups. Penry's legions assert that states like Nebraska require more signatures for an initiative than Colorado. Nevertheless, Nebraskans have almost two years to collect signatures, whereas Coloradans have six months or less. Comparing the ratio of required signatures to the time allotted to collect signatures, Colorado's requirements are more stringent than many, including Nebraska's.

To begin to hope to collect required signatures within the allotted six months or less, Colorado groups that have tried quickly discover they must raise one-half to one million dollars to hire signature gatherers.

Nebraska actually requires less signatures for a statutory initiative than Colorado - a practice that many would like to see Colorado emulate. Colorado's statutory process requires as much effort and cost as a constitutional initiative, and statutory amendments are subject to immediate overturn by a simple majority vote of the legislature, a primary reason so many Colorado initiatives end up being constitutional - if you go to all the trouble, why risk it? Some advocate a legislative "hands-off" period for a new statute, to encourage the use of statutory initiatives.

Initiative 71 requires geographic signature distribution, i.e., signatures equal to 2 percent of registered voters in each of 35 senate districts. Such distribution requirements have been overturned in 5 states, most recently in 2014 by a Nebraska District Court that ruled the requirement violates the Equal Protection and Due Process clauses of the U.S. Constitution, denies equality among citizens, and dilutes urban votes while assigning greater weight to rural votes.

Geographic signature distribution would be comparable to requiring a statewide candidate for office to achieve proportional votes or petition signatures in each senate district. The policy defies the meaning of one person one vote. It would grant veto power to one district, permitting a group (the same corporate interests promoting "71") to pour large amounts of money into one or two districts to thwart an initiative effort. Furthermore, signature distribution requirements put the initiative process further out of reach, structurally and financially, for all, whether residents of rural or urban areas. Not even the backers of "71" could say they achieved their professed goal, as Josh Penry noted, there is "no validation mechanism" for the Secretary of State's office to confirm such a goal. The cost to the state, as well as the abuse, confusion and disputes invited by this provision are bound to be high.

Other lessons could be learned from Nebraska. A complicated constitutional amendment like TABOR would never have passed in Nebraska, which prohibits interference with the legislature's constitutional right to raise revenues via taxation.

Nor does Nebraska require a fiscal impact statement of proposed ballot measures, another ALEC-oil & gas "gotcha" requirement that passed the 2015 Colorado legislature to try to sink the Citizen Ballot Initiative, the law known as HB 1057.

In more ways Nebraska is light years ahead of Colorado. In 2016 their legislature proposed a law to permit electronic signature gathering, which would improve the fairness, efficiency and oversight of the signature gathering process.

It is clear that so-called "Raise the Bar" corporate interests behind "71" have no interest in making the initiative process better, only impossibly difficult for the people, while permitting wealthy corporate interests to continue to control Colorado at every level.