Colorado Initiative 71 is brought to the state by an alliance of corporate lobbies led by Oil and Gas, and their political friends in high places. It reflects the vision of the Koch-funded American Legislative Exchange Council (ALEC) to create barriers to participatory democracy, whether voter suppression, state preemption of local laws, court challenges to Colorado municipal fracking bans and moratoriums, and ultimate attempts to place the Citizen Ballot Initiative - direct democracy - out of reach for all but the wealthy.

Colorado Initiative 71 follows ALEC's prescription - having gained control of the legislature, the goal is to eliminate the last vestige of democracy by 1) placing insurmountable barriers to qualifying ballot initiative language and 2) requiring a super-majority vote for passage of a citizen constitutional ballot initiative.

The two punitive requirements of Initiative 71:
1) Signatures must include 2 percent of voters in each of 35 state senate districts within the total signature count for any constitutional initiative, effectively making the cost and effort prohibitive, while substituting geography for the principle of one person, one vote. This one requirement also provides veto power to a single senate district to prevent an initiative favored by the majority of the state from making it to the ballot.
2) A super-majority vote - 55 percent - is needed for an initiative to become law, effectively overturning majority rule and replacing it with a tyranny of the minority (45 percent +1 would decide an issue).

Proponents of "71" argue the need to require agreement (i.e., equal signatures) from each senate district before an amendment can even make it to the ballot to be voted on statewide. This professed intention of "fairness" is belied by the fact that "71" is really the ultimate corporate power grab in a state already in the vise grip of the oil and gas lobby. In short, the large corporate special interests, led by oil and gas, see the opportunity with passage of "71" to drop a lot of money into a single district to kill an initiative that may benefit the entire state - a true "tyranny of the minority."

Pretense of concern for rural communities by wealthy corporate special interests falls flat against the realization that corporate lobbies are really only about propping up their own bottom line. Whether rural or urban, the exponentially greater expense of collecting a percentage of signatures in each senate district will place the Citizen Ballot Initiative out of reach for everyone in all parts of the state, except for the wealthy.

Even the proponents of "71" could not achieve their professed goal of "equal consent" by signature count statewide. Oil and gas representative Josh Penry acknowledged that the Secretary of State has no mechanism to evaluate the 2 percent count by senate district. Considering the additional difficulty of determining actual boundaries of any particular senate district, the 2 percent requirement invites abuse and contention, legal and otherwise.

Pretense: Colorado has the "easiest constitution in America to amend"

Whether their numerical signature requirement are more or less than Colorado's - e.g., Oregon's required initiative signature count is 8 percent of the previous number of votes cast for governor - other states permit significantly more time to gather signatures. Both Oregon and Nebraska allow almost two years for signature gathering, up to four times longer than Colorado. In contrast to Colorado, both Oregon and Nebraska require less signatures for a statutory initiative. Neither Oregon nor Nebraska require geographic distribution of signatures. Geographic distribution requirements have been overturned in 5 states, most recently in 2014 by a Nebraska District Court that ruled the requirement violates the Equal Protection and Due Process clauses of the U.S. Constitution and denies equality among citizens, diluting urban votes while assigning greater weight to rural votes.

Proponents of "71" profess to encourage citizen-initiated changes by statute, instead of constitutional amendment. Currently signature requirements are the same for both. Instead of making requirements for a constitutional amendment impossible, the number of signatures required for statutory initiative should be reduced, as is done in states like Oregon and Nebraska. Some Coloradans also call for a "hands-off" period (e.g., 5 years) so the legislature cannot immediately eliminate or alter a statute by simple majority vote. The ease of legislative overturn of a Colorado statute is illustrated by a campaign finance reform statute approved by voters in 1996, subsequently overturned by the legislature and requiring citizen passage of a constitutional initiative, Amendment 27 in 2002.

Only the corporate special interests behind Initiative 71, with access to tens of millions of dollars, would say that it is easy to pass a constitutional amendment. Any citizen group that has tried knows it is exceedingly difficult to collect the requisite signatures, unless one has a million dollars to pay signature gatherers as did Raise the Bar. This writer has participated in 6 or 7 initiative campaigns over a couple of decades. None of them achieved the necessary signatures except the 2000 effort for Background Checks at Gun Shows, which required one-third less signatures, collected by hundreds of volunteers. Even then, I am guessing some signature gatherers were hired.

Pretense: We must Protect the Colorado Constitution against Special Interests

Proposed during a similar earlier age of robber barons, the Colorado Citizen Ballot Initiative was passed in 1910 by an overwhelming vote of the people. It is intended to grant the people the first right to legislate, superior even to the legislature, as a counter to unresponsive or corrupt government.

Despite claims by "71"'s advocates that the people have run amok with our constitution, the state constitution has been amended only 48 times by citizen initiative in 106 years - less than one amendment every 2 years. The legislature is responsible for adding almost two-thirds - 82 - of constitutional amendments. Among laws proposed and passed by Citizen Ballot Initiative are: Home Rule for cities; term limits; Great Outdoors Colorado funding for public recreational land; Sunshine Laws; energy standards; minimum wage; campaign finance reform; open meetings laws; and decriminalization of marijuana.

Specious comparisons between the Colorado and U.S. Constitutions by proponents of "71" disregard the different function of the State Constitution, which deals with many aspects of the nuts and bolts of state government, from special school districts, water and agriculture to mining, etc. By contrast, the U.S. Constitution essentially defines the three branches of government, subject to U.S. Supreme Court interpretation.

Gov. John Hickenlooper's declaration at a press event introducing "71" that "Colorado's constitution needs to be protected," begs the question, "Protected for whom?"

Mouthpieces of Building a Better Colorado advance the narrative that our Constitution is "open to manipulation" and has become a tool of "well-funded special interests" - a "dumping ground for every issue," charged Denver Rep. Dominick Moreno.

Nevertheless, the most well-funded out-of-state special interest is the oil and gas lobby backing Initiative 71. In 2016 alone, two Texas-based oil companies ponied up large sums of money to one of the largest Oil and Gas front groups, Protecting Colorado's Environment, Economy and Energy Independence (PCEEEI) - $5.5 million from Anadarko Petroleum and $5 million from Noble Energy. As it currently stands, only these corporate special interests can afford to spend several million dollars to hire petition gatherers and buy media, while dedicating millions of extra dollars to the harassment of signature gatherers advancing local control issues.

Contributions and expenditures of the Raise the Bar campaign are only a partial account. The incestuous spider web of oil and gas front groups spend millions of dollars to run multiple games of interference against Citizen Ballot Initiatives opposed by them. The sister organization of Coloradans for Responsible Energy Development (CRED) - which has spent megabucks on "feel-good" advertising to promote fracking since 2013 - is Protecting Colorado's Environment, Economy and Energy Independence, (shortened to Protect Colorado). PCEEEI reportedly invests its large reserves of corporate money in a continual effort to create PR opposing oil and gas safety regulations and accountability, and toward extensive research - polling, mailing, phoning, knocking doors, reportedly amassing a database of 3.9 million Colorado voters.

Fully funded by the oil and gas industry, CRED received contributions of $17,048,869 and PCEEEI received $11,618,972 in 2014 alone. By 2016 Protect Colorado had banked no less than $28 million, dedicated to opposing any 2016 oil and gas regulatory ballot initiatives, with large amounts directed against Initiatives 75 and 78. Protect Colorado in turn contributed $1 million to Raise the Bar Initiative 71 in September 2016.

The oil and gas industry's "Decline to sign" campaign was reportedly a first - trying to stop initiatives before they had a chance to reach the ballot, and aimed specifically at Initiatives 75 and 78 seeking local control of drilling and drilling setbacks. To that end, people were hired (one in pencil costume reported being paid $25/hour) to harass signature gatherers for "unfriendly" initiatives. One petition carrier reported being followed by a group of five screaming, "You're taking our jobs!"

A TV ad featuring a dark-skinned signature gatherer invoked fears of "special interests...trying to reshape our Constitution..." Karen Crummy, former Denver Post reporter, CRED director and spokeswoman for Protect Colorado declared, "These so-called grassroots groups are backed by out-of-state and international organizations whose mission is to ban responsible oil and natural gas development." They are "extreme and out-of-step with the majority of Coloradans," she asserted.

Harassment is just one trick in the oil and gas toolbox. The drilling industry in 2016 managed to drive up the cost of signature collection by reserving most major signature gathering companies in Colorado.

Proponents boast that tens of former Democratic and Republican leaders promote their initiative. These "71" political backers may be hoisted on their own petard. Legal analysis of "71" by a well-respected election lawyer reveals that "bad" constitutional measures entrenched in the Colorado Constitution and decried by "71" backers, will require the same standard to reform by initiative - i.e., 55 percent super-majority vote for passage, even if referred by the general assembly. Even "repeal" measures that don't require super-majority vote, still must meet the 2 percent requirement of registered voter signatures in each of 35 senate districts - likely to guarantee that problematic provisions currently in the Constitution, like the complex multi-subject TABOR amendment, will remain. 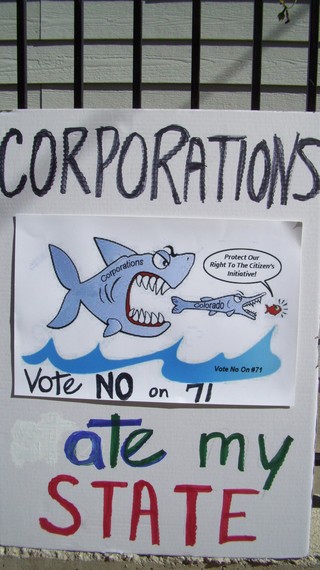