The suits, filed by the anti-drug group Safe Streets and three other plaintiffs, target a number of Colorado lawmakers, including Gov. John Hickenlooper (D), Revenue Department Executive Director Barbara Brohl and Marijuana Enforcement Division Director W. Lewis Koski. They allege that by allowing for a regulated marijuana market, these lawmakers are breaking federal law, which considers the plant illegal.

But going a step beyond simply suing the state, the plaintiffs -- Phillis Windy Hope Reilly, Michael P. Reilly and New Vision Hotels Two, the corporate owner of a Holiday Inn in the state -- are also going after participants in Colorado's commercial marijuana industry. Citing federal racketeering laws, the plaintiffs are seeking damages due to alleged injury brought on by legalization.

The suits name as defendants a number of participants in Colorado's marijuana industry, including various marijuana businesses and their owners, as well as several parties who have provided support for those businesses through banking, insurance and accounting services. The suits even name a construction company, claiming that it agreed to transport water to a marijuana grow.

"The Reillys are Colorado property owners who have been injured by a conspiracy to cultivate recreational marijuana near their land," one of the suits reads. "New Vision is... the owner of the Holiday Inn in Frisco, Colorado. It is suffering injuries to its business and property caused by the operations of Summit Marijuana, a state-licensed recreational marijuana store that plans to open less than 75 yards from the front entrance of New Vision’s hotel."

All plaintiffs, according to the suits, are members of Safe Streets, a Washington, D.C.-based group dedicated to combating crime and drugs. The group is led by James Wootton, a former Reagan Department of Justice appointee.

The suits argue that under the U.S. Constitution's supremacy clause, which states that federal law generally takes precedence over state law, Colorado's legalization of recreational marijuana is unconstitutional, because marijuana remains illegal at the federal level. The plaintiffs are asking federal courts to order Colorado lawmakers to comply with federal law, cease issuing licenses to marijuana businesses and shutter the entire industry in the state.

"This lawsuit is a bad idea and represents what is hopefully a last vestige of the wasteful war on drugs," Colorado state Rep. Jonathan Singer (D), a vocal supporter of the state's marijuana laws, told The Huffington Post. "If Safe Streets came to Colorado, they would see that their arguments about economic and moral decay hold no water."

Colorado voters strongly approved Amendment 64, legalizing recreational marijuana in the state, in 2012, and the first retail marijuana shops opened their doors on Jan. 1, 2014. Though the industry has undergone some trial and error since then, a July 2014 report from the Brookings Institution concluded that the rollout of the new marijuana laws has been largely successful thus far. Colorado's marijuana industry has ballooned to a value of around $700 million and the state has taken in about $60 million in taxes and fees, some of which is going toward school construction and renovation.

Singer also described to HuffPost a number of signs that marijuana has had little to no negative impact on the state. For example, employment numbers are up -- in fact, the state now has the fourth fastest job growth rate in the country, up from 40th place just five years ago. Meanwhile, crime rates are down in Denver, highway fatalities are at near-historic lows and marijuana use among teens has not grown more widespread under the new laws.

There have been some worrying episodes since the new laws went into effect. Two tragic and high-profile fatalities in Denver have been linked to some form of marijuana use. And state hospital officials have reported hearing from a growing number of adults and children who have consumed marijuana products, whose potency can be hard to judge.

In response, state lawmakers and the marijuana industry have worked to refine the laws over time. Today, more than a year since sales began, Colorado voters still don't appear to regret ending prohibition of the drug. 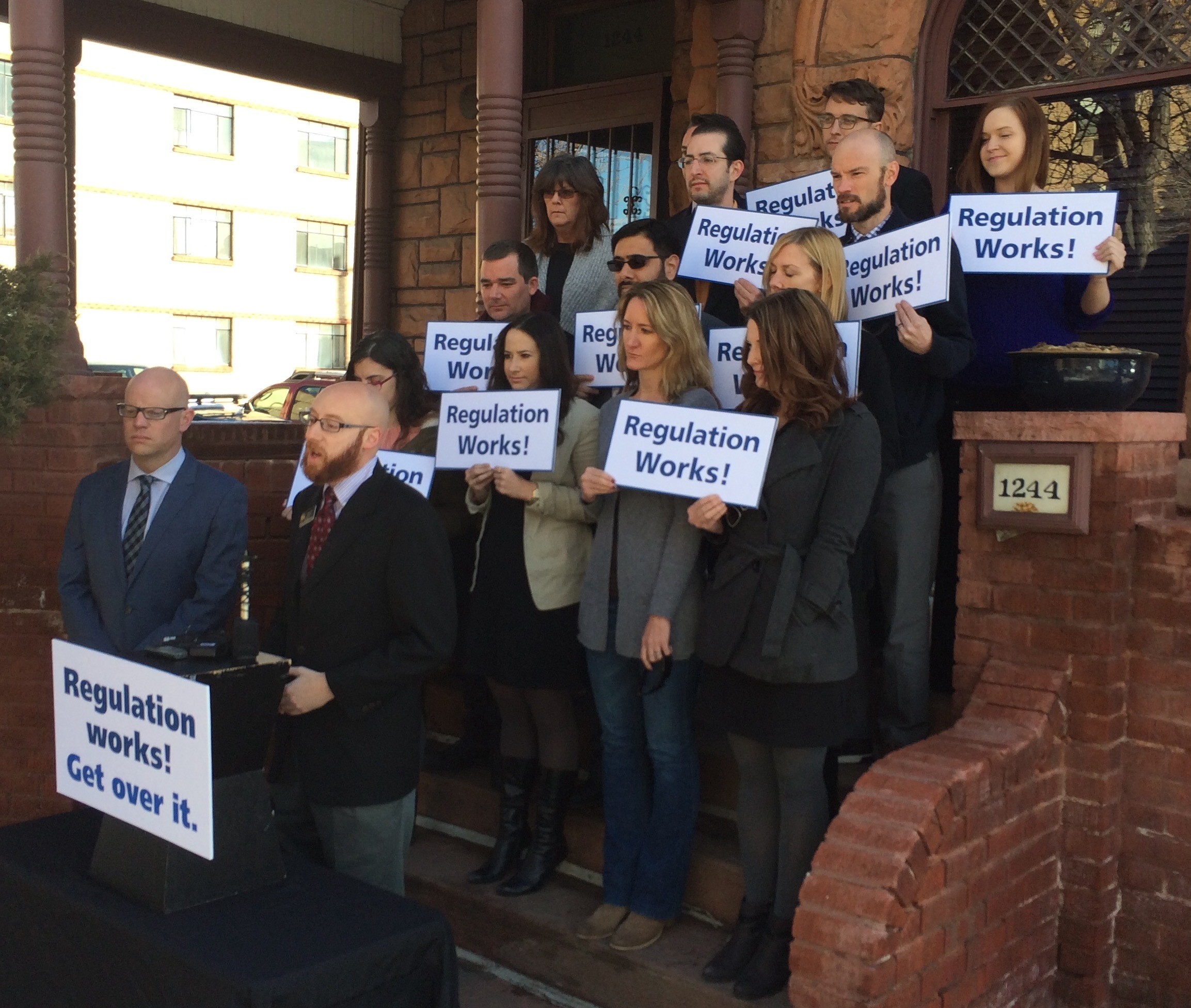 Colorado state Rep. Jonathan Singer (D) speaks outside of the Marijuana Policy Project's Denver headquarters on Thursday, Feb. 19, with others who support a regulated, legal marijuana industry in the state.

"We can't blame the victory or failures in our state solely on marijuana," Singer told HuffPost. "But it is clear that expensive lawsuits are a waste of time."

Carolyn Tyler, communications director for state Attorney General Cynthia Coffman, told HuffPost that the AG office hadn't been formally served with the suit and therefore hadn't had a chance to evaluate the claims the plaintiffs have raised.

"However," Tyler said, "the Colorado Attorney General's Office will defend the state's laws and our clients."

Thursday's suits mark the second time in a matter of months that someone has targeted Colorado's marijuana laws with litigation. In December, the states of Nebraska and Oklahoma filed a federal lawsuit against Colorado in the U.S. Supreme Court, arguing that Colorado's marijuana laws are not just unconstitutional but also damaging to the neighboring states because of an alleged increase in marijuana trafficking. Colorado has yet to officially respond to that lawsuit, but former Colorado Attorney General John Suthers said the suit is "without merit" and that the attorney general's office will "vigorously defend" against it.

Wootton announced his support for the states' suit against Colorado in January, saying that President Barack Obama has a "moral and Constitutional obligation" to enforce federal laws that prohibit marijuana.

Despite the programs currently in place in Colorado and Washington state -- as well as those that will soon go into effect in Oregon and Alaska -- the sale, possession, production and distribution of marijuana all remain illegal under the 1970 Controlled Substances Act. The states that have legalized marijuana or softened penalties for possession have only been able to do so because of federal guidance urging federal prosecutors to refrain from targeting state-legal marijuana operations.

"We all know the laws in Colorado and Washington and elsewhere violate federal law," Sabet told HuffPost Thursday. "It's nice to see someone has called these laws -- and this industry -- out in the courtroom."

But advocates for marijuana policy reform say this week's lawsuits are misguided. They say they doubt the litigation will be successful in dislodging Colorado's marijuana laws and industry.

“Colorado has no obligation to punish adults for using marijuana and every right to take steps to control it," said Mason Tvert, communications director for the Marijuana Policy Project. “It’s hard to imagine why anyone would prefer marijuana be controlled by criminals instead of by tightly regulated businesses."

"If drug cartels relied on litigation instead of violence," Tvert added, "this is the lawsuit they would file."