A man appears on the porch of the dam keeper's house and begins speaking into a radio. He eyes us as we pull the last of our four sea kayaks onto the shore and starts walking our way. It's late summer at the Cameo Dam just east of Grand Junction where a large portion of the Colorado River is being diverted to Grand Valley agriculture. When the man arrives, he informs us -- as indifferently as a cashier wishing us a nice day -- that the sheriff has been notified of our arrival. If he has never seen portaging boaters before, he already seems bored with the situation. It will take the sheriff 30 minutes to get here, but when he does, we'll be receiving a trespassing ticket.

Weighing our options, we attempt to bargain: "Can we just portage the dam and get back in the river?" we ask, looking at a launch point not far downstream. The dam keeper radios his boss but access is denied. We ask how much the ticket will be. He ponders the question for a moment before replying cheerily, "Probably not more than a thousand dollars each." We go back to the drawing board. 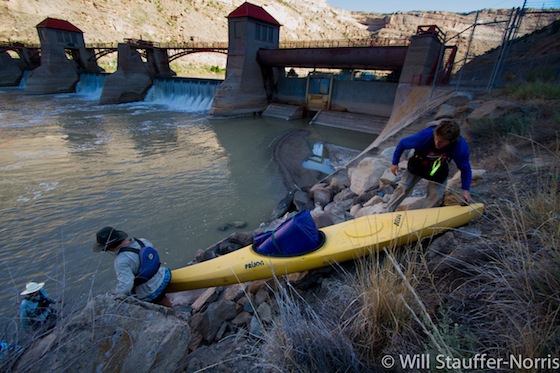 Twenty minutes later we've convinced the man to call off the sheriff. We've paddled across the river, fought our way through a thick patch of poison ivy, and have begun dragging our boats down the shoulder of Interstate 70. This dam is far too important to grant access to any group of scruffy kayakers that comes along, even if they claim they're paddling the length of the Colorado River to do research for something called the State of the Rockies Project. We understand. This dam has provided a livelihood to farmers and fruit growers in the otherwise desolate lowlands of the Grand Valley since 1918. But besides being one of the most productive growing regions in the state, anybody who has ever enjoyed the Colorado River upstream of Grand Junction has reaped the benefits of the Grand Valley's long-standing water rights. The Cameo Dam is able to "call" down over 3000 cubic feet per second (CFS) of water during the growing season from anybody upstream who has a junior water right. Even while the Denver and Northern Water Districts (suppliers of drinking water to the Front Range cities) have very old rights on the Colorado River and are looking to divert 80 percent of the headwaters region flows across the continental divide, the Cameo call ensures that a certain amount of water will make it down to the dam. As kayakers, we can appreciate the role the dam plays in state-wide water games, even if they don't tolerate portaging.

Back on the river, the local diversions had some more surprises in store for us. When Will Stauffer-Norris and I planned our source-to-sea kayaking trip last year, we knew we'd have to do some hiking where the Colorado River dries up along the U.S./Mexico border. What we didn't know is how many other times the river is entirely diverted from its bed before reaching the sea. Even if the recent bi-national agreement between the U.S. and Mexico provides some water for the delta, the river still won't flow continuously in drier years. Diversions under the continental divide create what's known as "the hole in the river" in Grand County, a hydropower plant in Glenwood Canyon can leave a few miles of river bottom exposed during low water, and the irrigation dams near Cameo can take the entire flow of the river, leaving a few hundred yards of near-stagnant pools. This area, a critical habitat for several species of endangered fish, is known as the "15 mile reach." Upstream of the Cameo dam, we were floating on over 3000 CFS of water; in the middle of the reach, we were on about 400 CFS, a flow closer to large creek than to a river. This dewatered section extends from Palisade through Grand Junction before agricultural return flows and the Gunnison River replenish it. 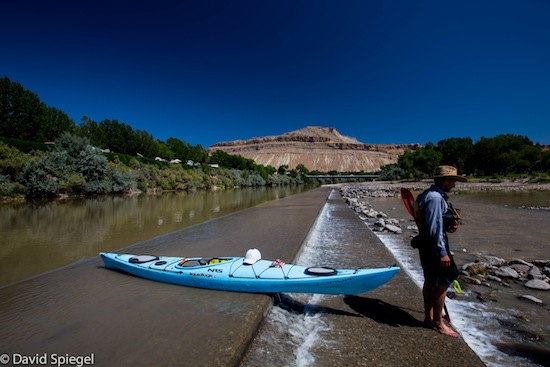 Agriculture consumes about 80 percent of the Colorado River. If you've ever eaten a salad with in the winter, there's a good chance it was grown thanks to the Colorado's water. But Colorado water law, which determines the amount of water farmers can take out of the river to irrigate, operates under a policy known as "use it or lose it." Jeff Houpt, an attorney in Glenwood Springs who specializes in water law, told us that "there is a provision in Colorado law which says if you don't use your water rights, eventually they can be abandoned." Losing a water right to irrigate is, in the majority of the Southwest, synonymous with being bankrupted as a farmer. Understandably, farmers will often do what they can to use their full allotment, even if it's not going to actual crop production. There are stories of farmers irrigating weeds in unused fields simply out of fear of losing their right to that water in the future.

Fortunately, water in the West has become far too valuable to the environment and to other users to allow such waste to continue, and there are numerous alternatives being explored. In the summer of 2012, the Colorado Water Trust (CWT) implemented a program to help farmers keep their water rights during drought years while at the same time keeping water in the stream. CWT's water leasing program will actually pay participating farmers to turn off their ditch and keep their fields dry. The water that would have been used for irrigation is left in the river and the estimated value of their crop (plus a small bonus) is paid to the farmers.

For farmers and fruit growers irrigating with water from the Cameo system, the "use it or lose it" rule doesn't apply in the same way as the rest of the state. Bruce Talbot, a fifth generation fruit grower in Palisade, told us about local cutbacks in water consumption. "In our own canal company, the Orchard Mesa Canal Company, we've been able to release more water than in the past, a lot of that has to do with sprinkler and drip systems that are more efficient with the use of water as well as the lining of canals." Installing these systems is sometimes against the best interest of farmers who fear losing their water rights by becoming more efficient. Talbot's orchard, however, is part of a cooperative canal company holds the water right, so individual growers have an incentive to install modern irrigation technology (with the help of government rebates) and to save water in the process.

Finding solutions that are good for farmers and for the river are more urgent than ever. We visited a farmer in Fruita who brandished a copy of a Patagonia Clothing catalogue with a story on dam removal and asked us if we wanted to "read some fiction."

"I think it's important we understand our basic needs, which are food and water," he said. "Recreation and maintaining the balance of the environment should be considered, but we have to consider our primary needs first." Hopefully with new laws that allow water leasing, more efficient irrigation technology, and a willingness to cooperate, we can find ways to grow the food we need without further degrading the river that makes desert farming possible.

For more information on the expedition, please visit www.downthecolorado.org.