A swarm of yellow life jackets pours out of rafts on the Colorado River and flows upward, single file, to the top of a small cliff. One by one they jump, letting out a quarter-second, midair yelp before disappearing into the water below. It's summer on the Pumphouse section of the Colorado, just upstream of the tiny raft guide enclave of State Bridge. Although this particular cliff is more than an hour's drive from any significant population center and nearly three hours from Denver, the commercial rafts float by our camp in an almost unbroken procession throughout the morning. As our expedition floated downstream towards Glenwood Springs, we saw this scene repeated again and again in various forms -- tubers, rafters, fishermen, and picnickers flocking to the river to find some relief from the heat and to enjoy a day beside moving water. 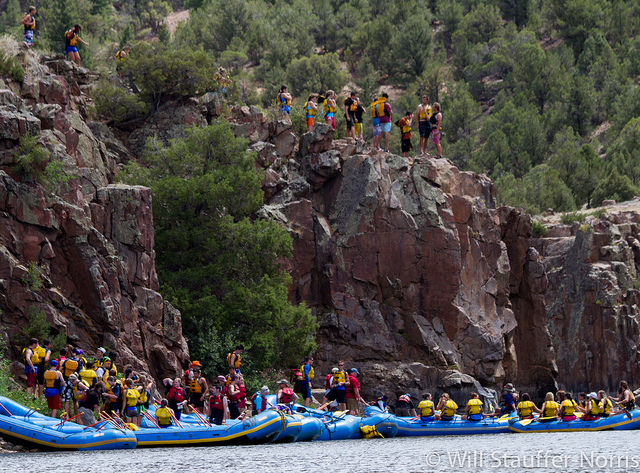 When we talk about reasons to keep water in our rivers -- as opposed to sinking it deep into fracking wells, spreading it on the lawns of new subdivisions, or sending it over the Rockies to other river basins -- recreation is often found near the top of the list. Recreation is one of the few uses of water that doesn't require pumping water out of our rivers. Instead, it encourages making our rivers as accessible, clean, and as naturally beautiful as possible.

In an election year like this one some candidates would like us to believe that to be pro-economy you have to be pro-growth, pro-drilling and in favor of new water projects such as reservoirs and diversions. According to this mentality, anything that's going to protect our state's natural resources is going to kill jobs and hurt our wallets. But there are other voices speaking up to say the direct opposite: that a strong, stable economy in Western Colorado is going to be built not on the booming and busting cycles of resource extraction, but on the seasonal, sustainable cycles of resource preservation. People who come to enjoy the Western Slope of Colorado to raft, fish, hunt, bike, camp, or simply to sightsee are drawn by the recreational opportunities the mountains and rivers have to offer as intact mountains and rivers.

As our expedition team floated down the length of the Colorado, we met with many river experts who commented on value of river recreation. First was Molly Mugglestone, the project coordinator for river-advocacy group Protect the Flows, who met with us to explain the river's contribution to the regional economy. Mugglestone has spent the last year creating a coalition of over 500 businesses in the Colorado River Basin who rely on a healthy river for their livelihoods. Coalition members range from the obvious rafting and fishing companies to small businesses in tourist towns who need the yearly influx of people to stay in business. Together Protect the Flows and the businesses they represent have been speaking up for the needs of a recreation economy.

"Policy makers have been really receptive to our message," Mugglestone said, "because we represent economic vitality. We represent jobs. We represent small businesses trying to survive with the economy and also with the drought." Helping to quantify the value of a healthy river system is a recently released Protect the Flows study which estimates the Colorado River generates an economic output of $26 billion annually and employs a quarter of a million Americans. In the state of Colorado alone $9.6 billion is produced from river-related business.

Summer in Glenwood Springs, Colorado is living proof of the report's findings. Not only do independent businesses survive on river recreation, but the local government has invested over a million dollars in a public whitewater park in town. When our expedition floated through, we broke out our own kayaks and spent the day on the artificial wave. The park, which was constructed in 2008, consists of several river features that kayakers of all ages play in, surfing the waves and practicing tricks in the holes. During high water, even surf boarders come to ride the artificial hydraulics. Crowds of spectators form on hot summer days, sometimes outnumbering the number of boaters in the water. Glenwood's park is just one of over 20 new Colorado whitewater parks built in the last decade.

Whitewater parks hold a unique place in the Colorado legal system. According to state law, water rights can only be obtained if the water is put to "beneficial use." Traditionally beneficial has meant agriculture, municipal and industrial uses, or hydropower. But, as the Protect the Flows report demonstrates, recreation makes a considerable contribution to the economy, and today it possible to obtain water rights for recreational purposes such as a whitewater park. 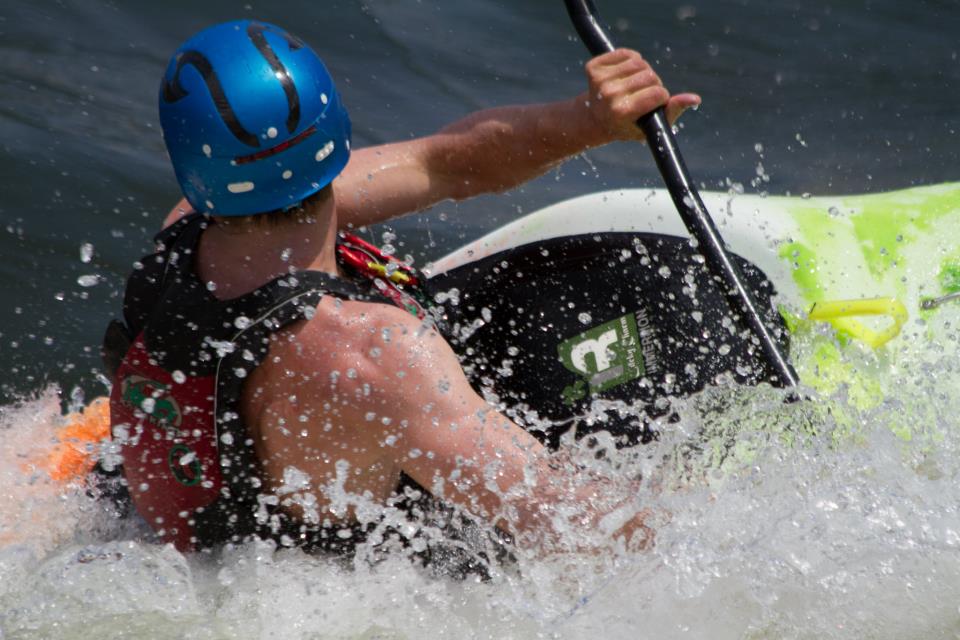 We met with Nathan Fey, the Colorado Stewardship Director for American Whitewater (AW), to learn more about this issue. AW is a national river conservation group, founded 1954, that is dedicated to protecting recreational use in whitewater rivers. Recently Fey has been working with a number of West Slope entities to negotiate with diverters to the Front Range. AW helps represent the recreation community and their needs. "One of the few tools we have in Colorado to help protect recreational flows is a whitewater park," Fey reported. "A water right for paddling through a whitewater park is being explored all over the state." Such a right is known as a Recreational In Channel Diversion (RICD). As this self-contradictory name indicates, water rights can still only be filed if they can be considered "diversions," which in the case of a whitewater park requires no diverting whatsoever. The beneficial use is found in the flowing river itself, which does more than draw crowds of tourists. "River-based recreation is a huge driver for our economy," Fey explained. "The other piece of that though is that flows which are great for recreation are also really good for the environment." Adequate flows for boaters mean better spawning grounds for fish, a healthier riparian habitat, and countless other benefits for the river's ecology.

The Glenwood whitewater park was the first of its kind along the entire Colorado River. Lurline Underbrink Curran, the County Manager for Grand County, is hoping that the County can build the river's second park at the mouth of Gore Canyon. Under the direction of the Grand County Board of County Commissioners, she has been working to keep water in the Upper Colorado for nearly thirty years and believes that finding a common ground on water issues "is the only thing that's going to keep this river whole in the future." Grand County recognizes the strong connection between the environmental health and economic strength on the Western Slope. But even without any immediate economic benefit, Underbrink Curran believes finding ways to ensure water stays in the river now is going to help us "save ourselves from ourselves in the future."

Whether the flows are secured for a whitewater park or for an endangered species, the whole system will see the benefit, now and in years to come. In a recent negotiation concerning the Denver and Northern Water's plans to divert up to 80 percent of the water above the confluence of the Fraser and Colorado Rivers, Underbrink Curran reported that "Grand County only bargained for water for the environment."

By keeping water in the Colorado River, by preserving the environmental benefits a flowing river brings, people and money are drawn to our state, and an investment has been made for our future. "A finite resource can have more than one function," she concluded. "Why not?"

For more information on the trip and the Colorado River please visit www.downthecolorado.org. 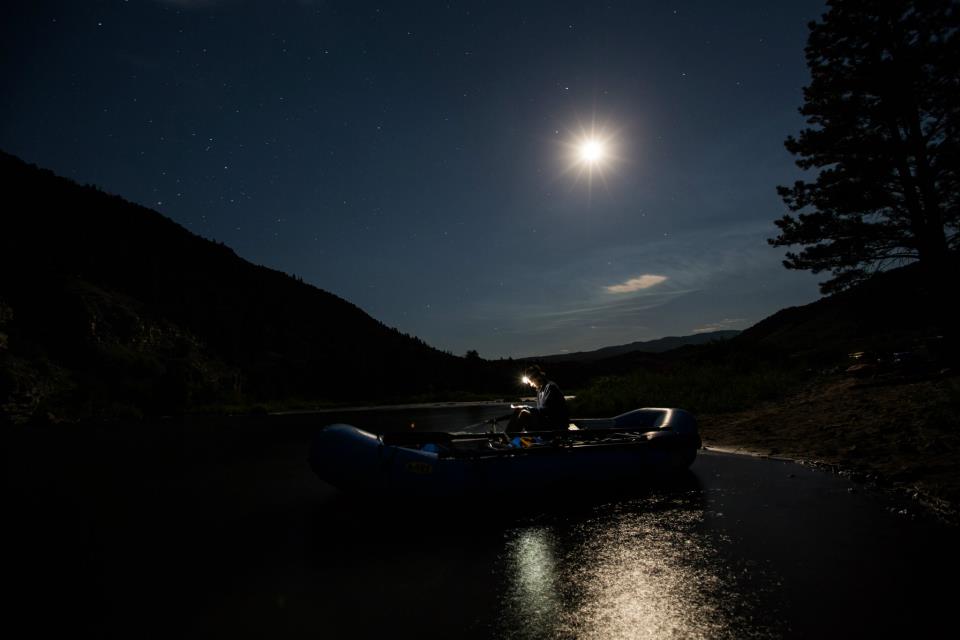