Two more polls give the Republican the upper hand in Colorado. We take a closer look at the unusual methods of one of them. And most Americans still aren't worried that they'll get Ebola. This is HuffPollster for Thursday, October 23, 2014.

COLORADO: NEW POLLS GIVE GARDNER EDGE - Colorado Senate race has been one of the closest and most closely watched contests of the campaign. Two new polls released on Wednesday show it tipping to Republican Cory Gardner over Democratic Sen. Mark Udall. A USA Today/Suffolk University telephone poll gives Gardner a 7 percentage point lead (46 to 39), while a new Internet opt-in poll from Reuters/Ipsos gives Gardner a 2 point edge (47 to 45 percent). All told, nine of the 11 surveys conducted in October have given Gardner at least a nominal single-digit advantage. The only exceptions have been two internal polls released last week, which were sponsored by Democratic organizations supporting Udall.

The HuffPost Pollster poll tracking model, based on all public polls but calibrated to better performing, non-partisan surveys, estimates Gardner's current advantage at just over 2 percentage points (48.4 to 46.1 percent as of this writing). The margin remains close enough, the polling variable enough and the potential for late shifts and polling error real enough to keep the probability of Gardner winning the race at just over 60 percent as of this writing. 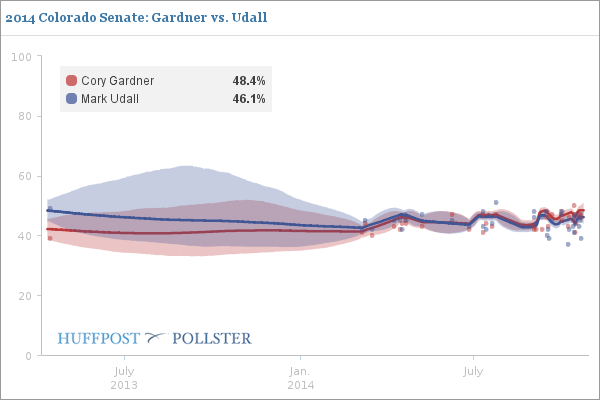 Suffolk Poll Methodology Part I: Calling Quotas - Like many other state level public polls, the USA/Today/Suffolk University polls rely on samples of randomly generated landline telephone numbers (known to pollsters as "random digit dial" or RDD) supplemented with samples of mobile phone numbers drawn from directories maintained by data vendors. Suffolk, however, has an unusual approach for dealing with the challenge of low response rates. Rather than weighting their data after it is collected to correct for statistical bias in the demographics, the Suffolk poll relies on "calling quotas" applied as survey calls are made. Suffolk Poll Director David Paleologos explained to HuffPollster that his Colorado methodology involved calling quotas for region, gender and party affiliation for each survey that are filled on the last night of calling. "If quotas are not filled," he added, "we reserve the option to weight the data or fill the quotas by fielding another day/night." The final data for the Colorado poll were unweighted.

Paleologos explained that in most cases these quotas ensure that the regional composition of the completed samples, and the party registration composition within each region, match statistics for prior elections gathered from official voting records. For the 2014 midterm elections, Suffolk also set quotas to bring each region close to 48 percent male and 52 percent female, reflecting the results from past exit polls. Thus, region, gender and party registration are its highest demographic priorities.

What about race and age? "It does get tricker with race and age," Paleologos tells HuffPollster. "We make a best effort to make sure that [based on] the best data we have available, whether be it Census data or exit polling data, that we can adequately fill in age and race."

Suffolk Poll Methodology Part II: Likely Voter Screen - The Suffolk Poll also relies on a relatively simple screen for selecting likely voters. Based on a single question, it interviews registered voters who say they are "very likely" to vote or who have "already voted," but terminates those who say they are only "somewhat likely," "not very likely" or "not at all likely" to vote. This approach drew attention on Twitter:

-The New York Times' Nate Cohn - "I think that even the most earnest poll unskewers will have a hard time against the composition of the electorate in Suffolk/USAT [poll, but]...I think it's insane to categorically exclude people who are 'somewhat likely' to vote in CO" [@Nate_Cohn here and here]

-Political data scientist Jon Robinson (D) - "LV screens are one of the things I dislike the most in this world." [@jon_m_rob]

-FiveThirtyEight's Harry Enten: "FWIW, 29 (or 5.8%) of respondents in previous CO Suffolk poll were somewhat likely to vote. Gardner won them 45-31... Even if all 29 this time went for Udall, Gardner still lead by 1.5pt... And it's not clear at all to me (see last poll) they would..." [@ForecasterEnten here and here]

Can we trust the Colorado polls? - Enten says yes: "[W]e’re beginning to hear arguments not to trust the polls in Colorado. Skeptics point to polls there in 2010 and 2012 that underestimated Democratic strength. Others argue that the polls aren’t including enough Latinos, and that there’s too many white respondents. Or that the Latino vote is too Republican-leaning. Or that maybe Colorado’s vote-by-mail system will complicate things, making it harder to know who will vote this year....Instead, Democrats are pushing two recent surveys by the well-respected Democratic pollsters Joel Benenson and Mark Mellman, both showing Udall leading by 3 percentage points. I don’t put much stock in any of these arguments... Gardner’s lead is nearing a point at which he could afford a polling error of [the] magnitude [of recent elections]...Furthermore, two elections in a row doesn’t mean the polls “always” underestimate the Democratic candidate in Colorado...there’s isn’t much evidence public pollsters are overestimating the share of Latinos will make up of voters...Pollsters haven’t had problems with vote-by-mail states...The polls and the fundamentals [in Colorado] tell the same basic story: An unpopular incumbent is losing in a purple state against a decent candidate in a slightly Republican-leaning year. That’s a pretty believable story." [538]

More on the latest Senate polling

Iowa Senate - A Quinnipiac University poll released Thursday morning joins the chorus of recent polling showing the race within 2 or 3 points, with Joni Ernst (R) at 47 percent to Bruce Braley's (D) 46 percent. The majority of surveys in October give Ernst at least a nominal edge. The Pollster model has her up by less than 2 points,with a 56 percent chance of winning. [Iowa chart, Quinnipiac]

New Hampshire Senate - A PPP (D) poll for the League of Conservation Voters, released Wednesday, gives Sen. Jeanne Shaheen (D) a 4-point lead over Scott Brown (R), down slightly from their previous surveys of the race. A CNN poll, released Thursday, finds the race even closer, with Shaheen just 2 points ahead, speculating that "President Barack Obama's plummet in popularity is hurting Shaheen more than any other incumbent in the country." HuffPollster's model, which doesn't yet include the CNN numbers, gives Shaheen an edge of about 3 points and a 61 percent chance of winning. [New Hampshire chart, CNN, PPP]

Georgia Senate - A SurveyUSA poll, released Wednesday, is the third in a row to give Michelle Nunn (D) an edge over David Perdue (R), with 46 percent to his 44 percent. A previous SurveyUSA poll, in mid-October, had Nunn ahead by 3, while surveys in the months before had largely given Perdue a small lead. [SurveyUSA]

AMERICANS ARE A LITTLE MORE FREAKED OUT BY THE FLU THAN EBOLA - HuffPollster: Americans are "a little more likely to say the flu is a bigger threat to the nation, a new HuffPost/YouGov poll finds, with 45 percent saying the flu is a greater danger, 40 percent naming Ebola, and the remaining 15 percent undecided….Although Americans' concerns about Ebola have risen since news of this year's outbreak first surfaced, most still believe that the threat will remain manageable, and that they're unlikely to be personally affected. Fifty-two percent now say they're confident there won't be a large Ebola outbreak in the U.S., down only slightly from the 56 percent who said so in early October. Fifty-five percent say they're not particularly concerned that they or someone in their family will get Ebola. Yet most don't think news coverage is overhyping Ebola either. Forty-four percent say there's been about the right amount of media attention paid to the disease, while just 26 percent say the media is giving it too much play. Another 17 percent say the disease has actually been undercovered." [HuffPost]

MIXED OPINIONS ABOUT HISTORICAL PROTESTS - Paul Herrnson and Kathleen Weldon: "Few generalizations can be made about the public's support for protest movements in general; level of support varies by issue. But perhaps because personal experience with protest is rare -- just 10 percent said they had ever participated in a protest in a 2013 AP/Gfk Knowledge Networks poll -- the public's overall attitude toward mass demonstrations seems to range from skepticism to outright condemnation. Even the most popular protest events have support levels that hover below half, and positive responses are rarely higher than negative ones. The public is particularly uncomfortable with protest during wartime…..However, Americans can be quite supportive of protests on other shores, particularly in countries where the government is seen as particularly repressive….Distance of time as well as place can make protest movements more appealing to the public." [HuffPost]

-FiveThirtyEight calculates a 47 percent chance we don't know who won the Senate on Election Day. [538]

-The rate of third party and independent candidates running for Senate has risen in recent years. [Smart Politics]

-Kyle Kondik and Geoffrey Skelley see a hazy midterm outlook, but one that likely favors the GOP. [Sabato's Crystal Ball]

-Frank Newport speculates about why Americans have given less thought to this year's election. [Gallup]

-Peyton M. Craighill, Scott Clement and Jim Tankersley say Americans are still waiting for someone to fix the economy. [WashPost]

-Pew Research examines likely voters through the lens of their Political Typology. [Pew]

-73 percent of adult internet users have seen someone be harassed online and 40 have personally experienced it. [Pew Research]

-The Latino Decisions pollsters tell Adrian Carrasquillo that most people are getting the Latino vote wrong in Colorado. [Buzzfeed]