If you’re planning on eating one of Colorado’s legal weed treats, make sure to read the label carefully first -- it might contain up to ten times the recommended dose of pot.

This troubling fact was highlighted earlier this week when New York Times columnist Maureen Dowd published an account of how she had eaten only "a bite or two" of a marijuana-infused chocolate bar before falling into a "hallucinatory state" that lasted eight hours. Dowd wrote that she found out the next day from a worker at an edibles factory that the psychotropic candy bar was supposed to be split into 16 pieces for beginners. But the bar’s label, she claimed, didn’t say that.

Even if there may have been some user error on Dowd's part, her bad trip exemplifies a problem plaguing Colorado's new industry for legalized recreational marijuana. Marijuana-infused snacks in the state must prominently list their total THC content, but customers often have to read the fine print to figure out that they're only supposed to eat a tiny portion of the candy bar or other edible they've purchased. 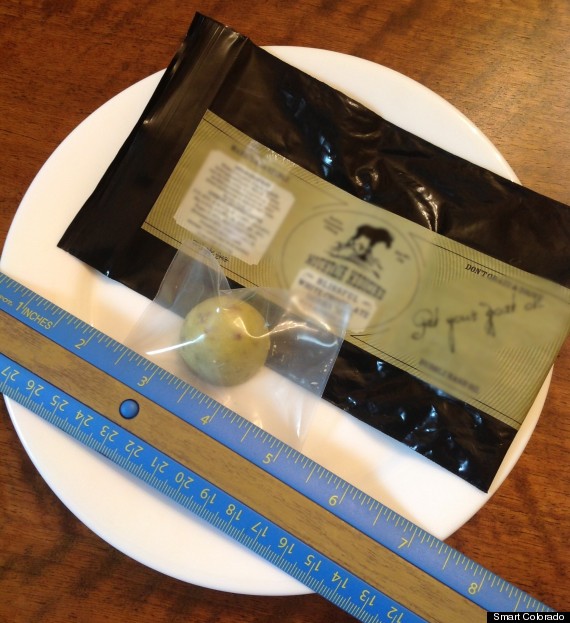 This bite-sized white chocolate truffle made by Mountain Medicine in Denver has 100 milligrams of active THC, which is ten times the recommended dose. (Photo courtesy of Smart Colorado)

Current law in Colorado mandates that weed cookies, hash honey and other such products state on the label that “the standardized serving size for this product contains no more than 10 milligrams of active THC.” However, edibles makers aren't required to notate their treat by serving size, so it can be hard to know exactly when to stop munching.

For many of us, eating a full candy bar in one sitting is normal. While you can't die from a marijuana overdose, if that candy bar has 100 milligrams of active THC in it (Colorado's legal limit), you could find yourself uncomfortably baked for many hours before the effects subside.

Colorado company Dixie Elixirs sells a marijuana-infused soda with 75 milligrams of active THC -- which is the equivalent of 7.5 servings. While experienced stoners might be able to drink the whole bottle and have a great time, many people would be utterly zonked.

To change that, the company said it is developing a similar soda that is far less potent, with only 5 milligrams of THC in the whole bottle instead of 75.

“That way, if you’re a tourist, or you just have a low tolerance, you can start low,” said company spokesman Joe Hodas, who acknowledged a “chasm” in terms of consumer education around THC serving size. Hodas said his company also has plans to give customers a fact sheet with serving information.

The Colorado Marijuana Enforcement Division, which regulates the industry, is discussing how to make marijuana products easily separable by serving size, according to Jordan Wellington, an attorney who helped draft many of the current regulations surrounding retail pot.

Such changes could include dividing lines on products making it easier to snap off a 10-milligram serving size. Another option would include colored symbols like the ones ski slopes have, where a green circle means your magic cookie is for beginners and a black diamond means you probably shouldn’t eat it unless you’re an “expert.” 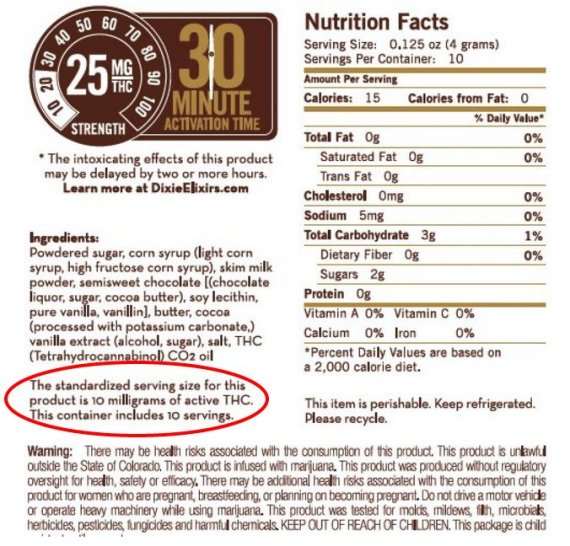 Colorado law requires companies that make THC-infused snacks say on the label that a serving size is only 10 milligrams. Entire products often contain much more than that, and the product is often not prominently marked for serving sizes. Above, a label from Dixie Elixirs' "Dixie Rolls," which are essentially cannabis-infused Tootsie Rolls.

State law also says that companies who make marijuana food items must have their products tested for potency and consistency at independent labs. When a batch is determined to be too strong, it gets sent back to the maker to be fixed or thrown away. The pot treats must be sold in opaque, childproof containers.

With all the regulations already in place, some of Colorado’s small marijuana businesses aren’t keen to add more information to their already heavily labeled products.

“Have you seen how much is written on our labels already?” said Eric Underwood of Canna Elixirs, a medical-marijuana-edible maker in Denver. “It’s crazy. I can’t possibly fit anything else on there.”

“It’s really over the top,” he said. “Doing more of that is only going to raise costs more.”