A newly discovered statue of a curly-haired man gripping a spear and a sheath of wheat once guarded the upper citadel of an ancient kingdom's capital.

The enormous sculpture, which is intact from about the waist up, stands almost 5 feet (1.5 meters) tall, suggesting that its full height with legs would have been between 11 and 13 feet (3.5 to 4 m). Alongside the statue, archaeologists found another carving, a semicircular column base bearing the images of a sphinx and a winged bull. 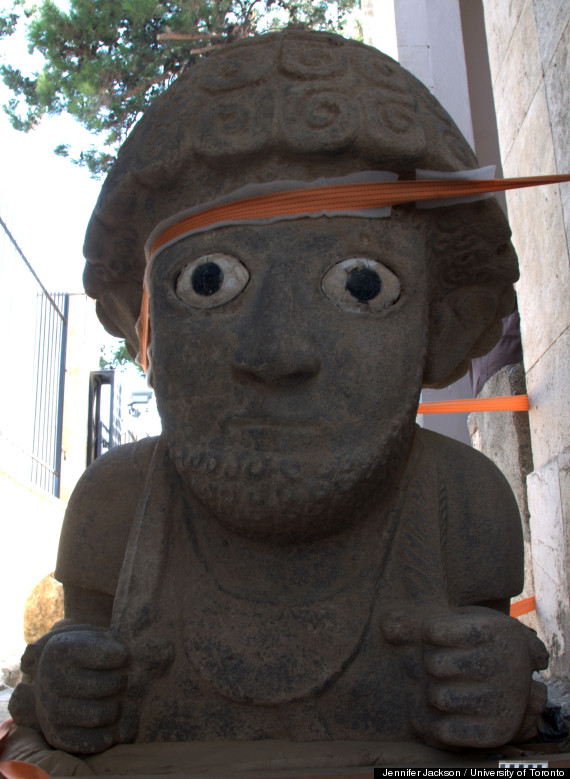 The pieces date back to about 1000 B.C. to 738 B.C. and belong to the Neo-Hittite Kingdom of Patina in what is now southeastern Turkey. They were found at what would have been a gate to the upper citadel of the capital, Kunulua. An international team of archaeologists on the Tayinat Archaeological Project are excavating the ruins.

The Neo-Hittites were a group of civilizations that arose along the eastern Mediterranean after the collapse of the Hittite Empire around 1000 B.C. When the statues were carved, the area was emerging from the Bronze Age and entering into the Iron Age.

The male sculpture boasts a beard and inlaid eyes made of white and black stone. He wears a crescent-shaped pectoral shield on his chest and lion-head bracelets on his arms. On his back, a long inscription records the accomplishments of Suppiluliuma, the name of a king of Patina already known to have banded together with Syrian forces in 858 B.C. to face an invasion by Neo-Assyrians. [Top 10 Battles for the Control of Iraq]

The column base stands about 3 feet (1 m) tall, with a diameter of 35 inches (90 centimeters). The column likely stood against a wall, as only the front is decorated with carvings of a winged bull flanked by a sphinx.

The presence of such statues was common in Neo-Hittite royal cities, the researchers said. The newly discovered carvings would have guarded a passageway of gates to the heart of the city.

"The two pieces appear to have been ritually buried in the paved stone surface of the central passageway," Tayinat Project director Tim Harrison, a professor of archaeology at the University of Toronto, said in a statement.

The passageway and gates seems to have been destroyed in 738 B.C., when Assyrian forces conquered the Neo-Hittite city. The area then appears to have been paved over and turned into a courtyard. Archaeologists have also uncovered smashed Neo-Hittite slabs and pillars as well as two carved life-size lions.