The Kappa Alpha Theta sorority at Columbia University apparently doesn't read the news about what happens when Greek students dress up in racial stereotypes and post photos on social media.

Photos posted to Facebook, Instagram and other social media outlets from members of Kappa Alpha Theta show students at a "Beer Olympics" party dressing in racial stereotypes meant to represent Mexico, Japan, the Netherlands, Ireland, Jamaica and other countries.

The photos came from an Olympic-themed mixer with Sigma Phi Epsilon held on Saturday, according to the Columbia Lion.

The photos of the team intended to represent Mexico have particularly drawn scorn: the women wore t-shirts with an altered Mexican flag and the words "Down to Fiesta" written over the chest, and several students donned large fake mustaches and sombreros and carried maracas. One woman held up a bottle of tequila.

The team's photo was remarkably similar to one from Penn State University's Chi Omega sorority that led to the chapter's suspension, and ultimately its extinction at the campus. Another Chi Omega chapter, at the University of Pennsylvania, also came under fire last week for holding a "gangsta party" with the Beta Theta Pi fraternity where attendees sported fake knuckle tattoos, baggy clothes and backwards hats.

These sorts of racially-themed dress-up events never end well for the fraternities and sororities involved. Just take a look at the reaction to the "Chola" party at California State University-San Marcos, the "Bloods & Crips" party at Dartmouth College or the racist Martin Luther King Day party at Arizona State University, to name only a few in a long line of examples.

Among some of the other stereotypes at the Columbia party included a student with the Ireland team holding a sign reading "Kiss me, I’m a famined potato," and a group of students on the Japan team wearing school girl outfits and headbands known as hachimaki. 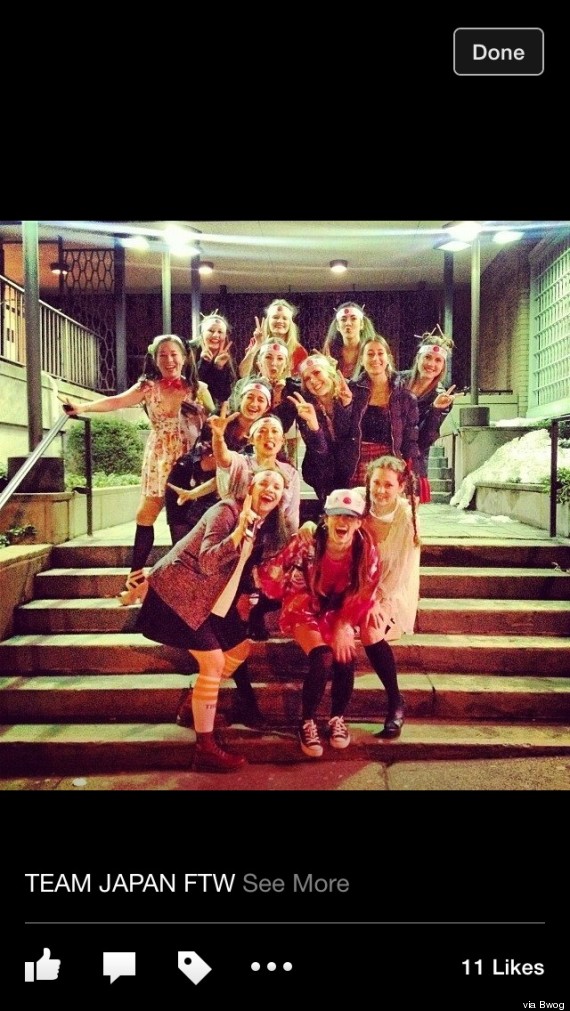 In a statement, the Columbia Chicano Caucus took particular offense to the altering of the Mexican flag:

While we understand that the actions taken by these members may not have intended to be harmful, they were in fact offensive. Stereotypes are used to oppress marginalized communities. These pictures caricaturize Mexican culture and should not be overlooked. The attire trivializes an entire nation’s history, its peoples, and its cultures, reducing them to a mere mustache and sombrero. Though the attire was meant to represent Mexico in a game of Beer Olympics, in actuality it perpetuates the American stereotype of the sombrero-wearing Mexican-American migrant worker, distorting the culture into a form of entertainment.

That’s not to say that members outside of the Mexican culture cannot dress in our cultural garb or partake in our traditions. However, altering the Mexican flag is not the way to participate in a respectful manner.

The Panhellenic Association also issued a statement condemning the incident:

Though it is our understanding that the photos were not posted with the intent to offend or alienate any group or individual, the Panhellenic Association would also like to emphasize that it does not at all condone behavior or language representing any form of cultural insensitivity, whether intentional or not. Moving forward, we will continue engaging in conversations and educational efforts with our chapters’ members and leaders to promote a strong understanding of, and commitment to, the diversity we so deeply value within the Greek community, on campus, and beyond.

Again, we truly apologize for any harm the incident and photos in question may have caused and are actively working to rectify the situation, as well as to address the concerns of the community, to the best of our ability.