I spent the past several days participating in the Indigenous Environmental Network Campaign to Stop GE Trees Action Camp in the Qualla Boundary, homelands of the Eastern Band Cherokee in North Carolina. Participants included members of tribes across the Southeast, who came to learn about plans for growing genetically engineered trees on and/or adjacent to their territories.

The event was spurred by the fact that the USDA is due any day to release a draft Environmental Impact Statement on the proposed deregulation of GE eucalyptus that has been developed by South Carolina based company, Arborgen. Arborgen's trees are engineered for cold tolerance, with the intent to extend the range of eucalyptus so they can be grown across the southern states from South Carolina to Texas. Test plots are already in place with over 200,000 GE eucalyptus trees planted.

Meanwhile the American Chestnut Foundation is moving to engineer blight-resistant chestnuts. Using the rhetoric of "species restoration," the project appears aimed largely to win over the hearts and minds of the public to overcome resistance to the concept of GE trees, in hopes it will open the floodgates to deregulation of other varieties.

Much of the Southeast, first colonized by European settlers, has since been colonized by industrial monoculture pine plantations that have displaced vast areas of the formerly biodiverse native forests.

The Eastern Band Cherokee, like most indigenous peoples, have a deep historical and spiritual relationship to, and dependence on, their lands. Chestnuts remain a staple part of their diet. They are famous for their basket-making. Their history, culture and survival is intimately tied to their relationship to the trees native to their lands.

When the European colonists claimed their lands, the descendants of current Eastern Band Cherokee escaped the dislocation that led to the infamous Trail of Tears by hiding out among the trees and within the dense foliage of rhododendrons.

Retaining control over their lands has been an ongoing struggle. The people were made to purchase their own lands from the government -- and in fact raised the funds to do so three separate times before they were finally granted control over the Qualla Boundary lands. Forced to finance their own land, the Cherokee did so in part by cultivating mulberry trees and silkworms.

Indigenous Peoples the world over have faced oppression and targeting of their lands for industrial tree plantations. In the global south, eucalyptus plantations have displaced peoples from their lands, depleted waterways, contaminated them with herbicides and pesticides, and increased fire risks. They are referred to as "green deserts" and viewed as a new form of colonization.

The push to create and cultivate engineered trees is driven by escalating and unsustainable demand for wood for pulp, timber and now, increasingly, for biomass. Presented as a "solution" to climate change, using trees and crops to produce biofuels and chemicals, or to burn alongside coal for commercial and industrial scale electricity and heat is far from environmentally or climate friendly. But the subsidies and supports continue to flow.

To meet the burgeoning demand, trees are being engineered to grow faster, or to have altered lignin (lignin is the structural material in wood that lends strength, but it also interferes with refining wood into fuels and chemicals).

Besides engineering trees, biotechnologists are deploying new synthetic biology techniques, oft referred to as "extreme genetic engineering," to create microbes that can digest and convert wood -- overcoming the "lignin barrier" -- into fuels and chemicals. Risky, unregulated and by many accounts unethical, synthetic biology is the subject of a big push at the currently ongoing Convention on Biological Diversity Council of Parties meeting in Korea. A coalition of groups are pushing the convention to adopt a moratorium on the environmental release and commercial use of synthetic biology.

Like GE trees, synthetic biology involves a "rewriting" of the genetic code of life, a code that evolved over a long and shared history common to all of life. Such manipulation is deeply objectionable, and antithetical to indigenous and many other world views. In Qualla Boundary, consensus was overwhelmingly against GE trees. Danny Billie of the Independent Traditional Seminole Nation in Florida stated, "The forest gives life to The People, but these GE trees mean death. They are not for The People, they are only to make money for a few rich people." 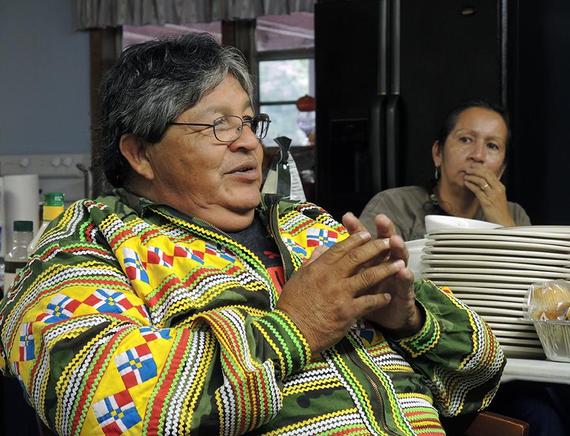 On Columbus Day we can sadly reflect on the brutal history of colonization that American Indians faced when Europeans "discovered" and then claimed their lands. Now, centuries later, the ongoing colonization process threatens to colonize not only their lands, but even the genetics of the trees in their forests that are central to their history and livelihoods.