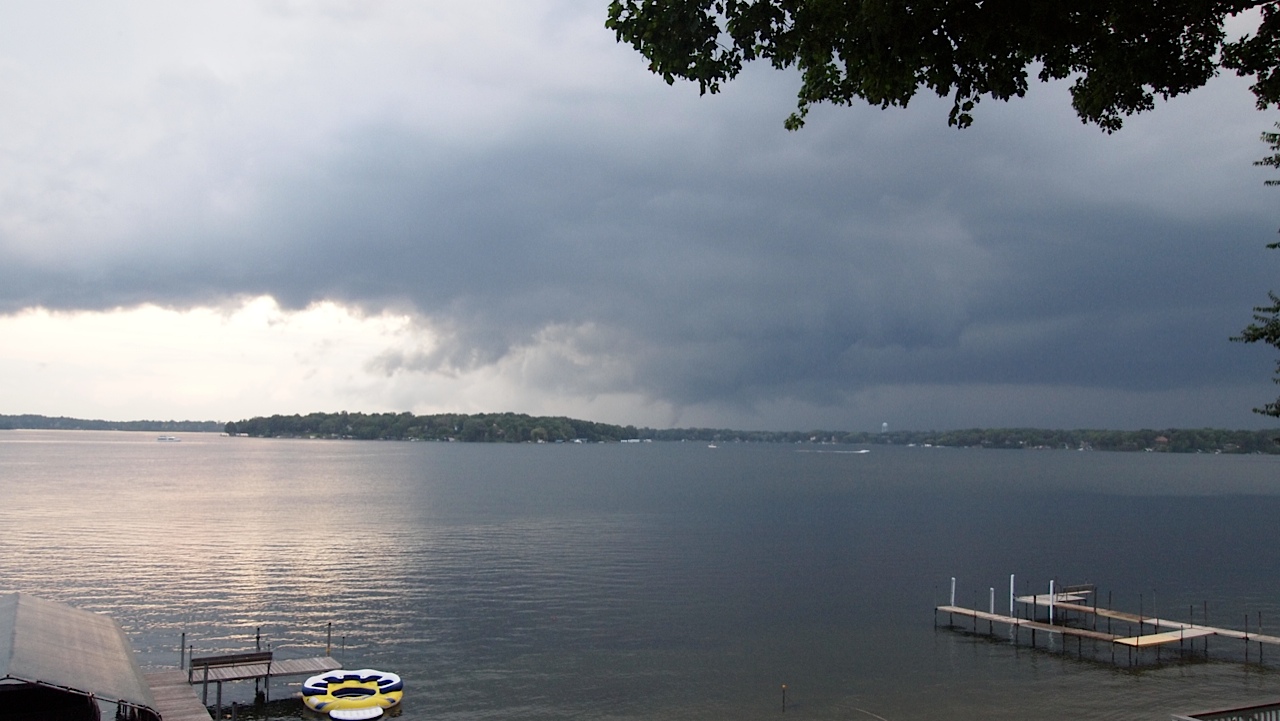 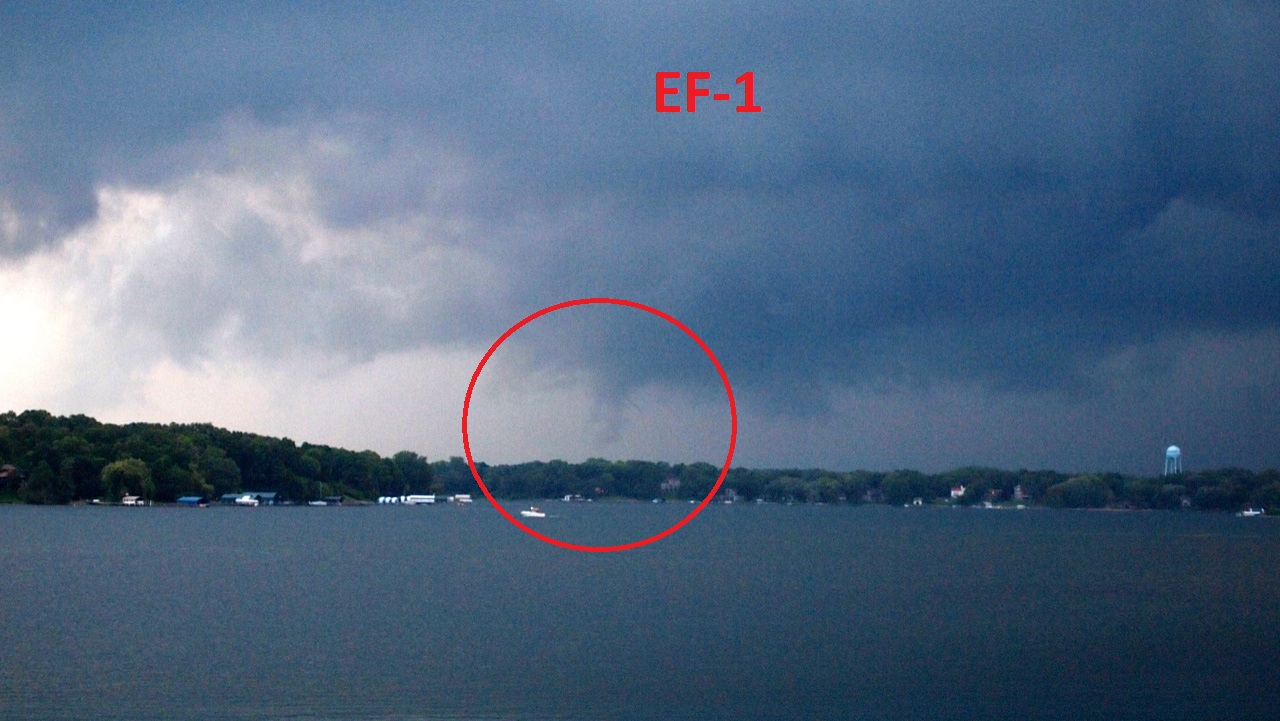 Tornadoes From My Dock. I snapped these pictures from my dock on Lake Minnetonka, 15 miles west of Minneapolis, in August, 2009. Three minutes later the sirens sounded.

America is facing many challenges, most beyond my pay-grade and expertise. This I know: the USA is the Superbowl of Severe Weather, experiencing more tornadoes than any other nation on Earth. And there's circumstantial evidence that more large, violent, long-track tornadoes are touching down east of the Mississippi River, descending on more heavily populated areas with fewer underground shelters and a largely apathetic population - locals who never dreamt they would ever live in "Dixie Alley", sitting ducks for a mile-wide, rain-wrapped "wedge". 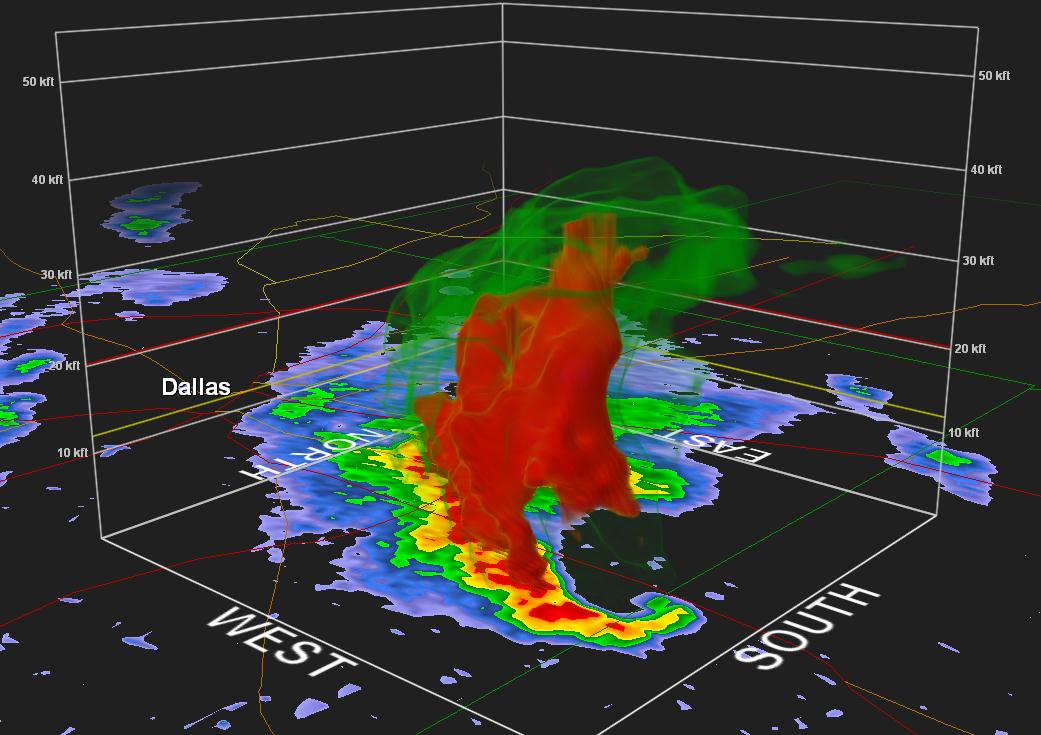 3-D Visualization of the April 3 tornado that struck Lancaster, Texas. 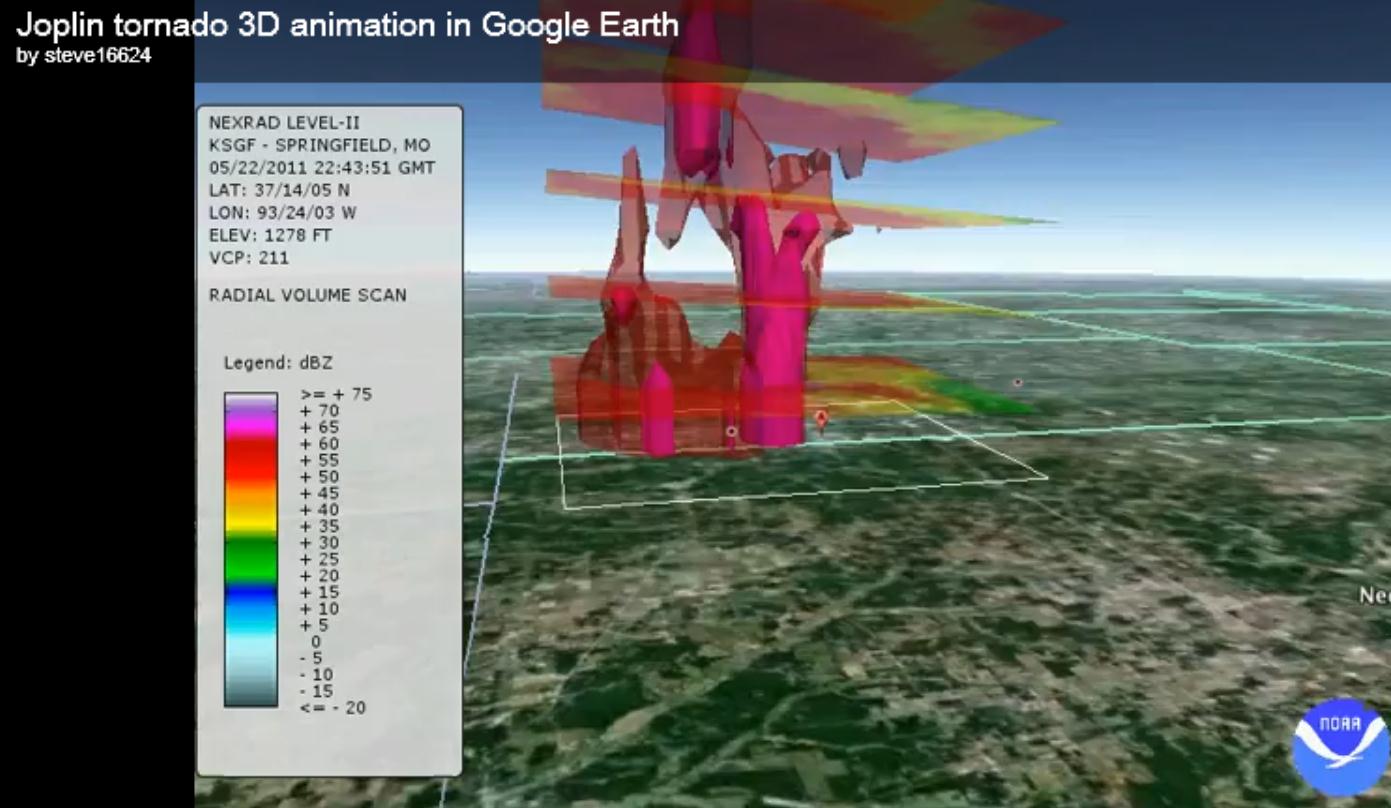 3-D Visualization of the tornadic "supercell" that spawned an EF-5 tornado in Joplin, Missouri on May 22, 2011. Courtesy: NOAA.

We can't stop a tornado (yet), but we can collectively do a better job warning people in the immediate path of a violent, potentially life-threatening 150 mph. blender of wind-whipped debris. There is a perceived problem, and I'm going to propose a solution. I'm Director of Meteorology at WeatherNation TV, a new, national cable weather channel. I'm blessed to be able to work with some of the best tornado-detection technology on the planet, including "VIPIR" radar from Baron Services in Huntsville, Alabama, the Gold Standard for Doppler detection and analysis. I have no affiliation with The National Weather Service, which should be noted - does a (much) better job than any weather service in any other nation on Earth; keeping Americans informed of life-threatening weather 2/4, 7 days a week. Here's one area where your tax dollars are paying daily dividends. NOAA is a state-of-the-art organization with professional meteorologists and administrators, leveraging the world's best weather technology to keep us all safer. 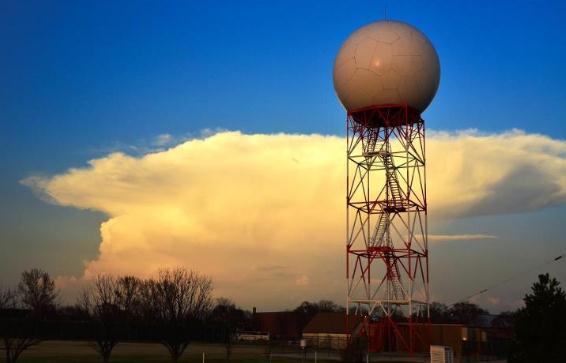 Doppler radar, courtesy of the Chicago office of The National Weather Service.

But there's a problem: NWS meteorologists in each local office are incentivized to warn for every potential tornado. Unlike hurricanes, which last for days, even weeks, and can be tracked and categorized by GOES weather satellites to give some estimation of impact, tornadoes are the equivalent of an atmospheric hiccup: brief and fickle. We still can't predict precisely which towns will be impacted by tornadoes - all we can do is highlight regions of the USA where conditions are ripe for development of the spinning "supercell" thunderstorms capable of spawning tornadoes.

The challenge: only 2-3 out of 10 of these rotating supercells, also known as "mesocyclones", will ever go on to drop a tornado. Everyone wants to err on the side of safety. I get it. Meteorologists would rather hear: "you're issuing too many warnings!" than "the tornado struck without warning!" But by issuing a tornado warning for every severely rotating storm the "false alarm rate" is stubbornly high, anywhere from 65-85%. Most rotation-based tornado warnings turn out to be duds, false alarms, interrupting favorite TV shows, annoying viewers with "continuous coverage", breeding a sense of cynicism and apathy that can kill when "The Big One" finally does arrive. 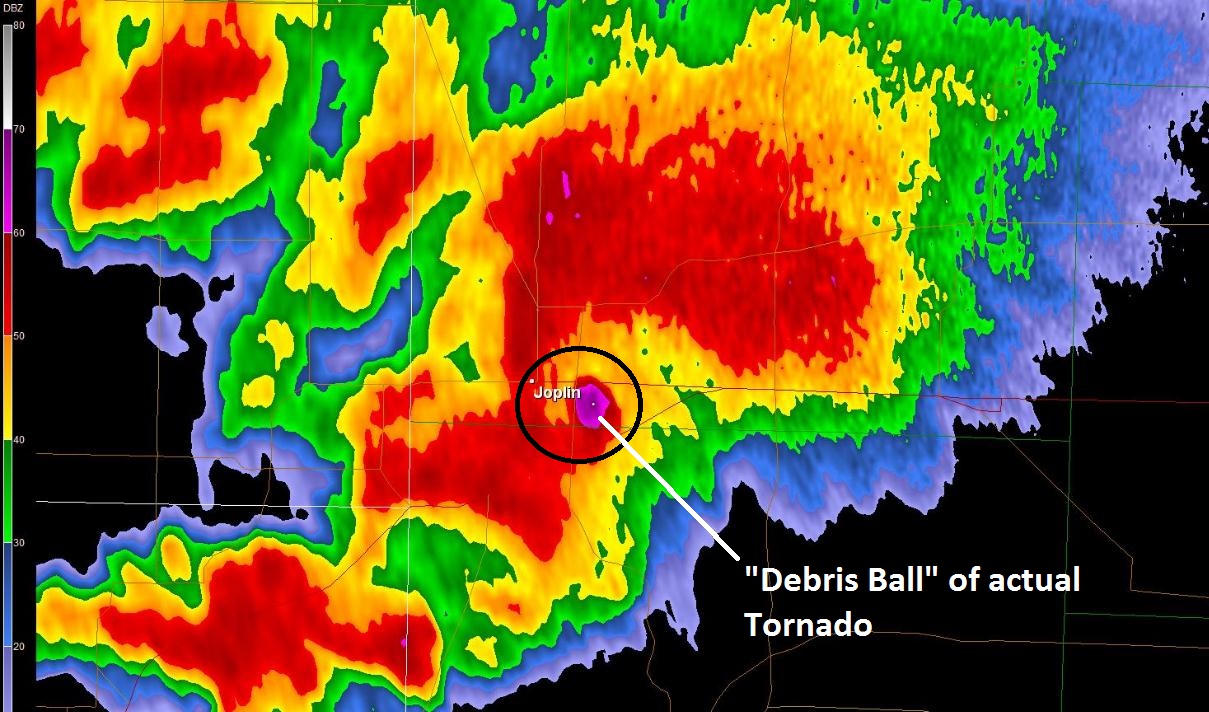 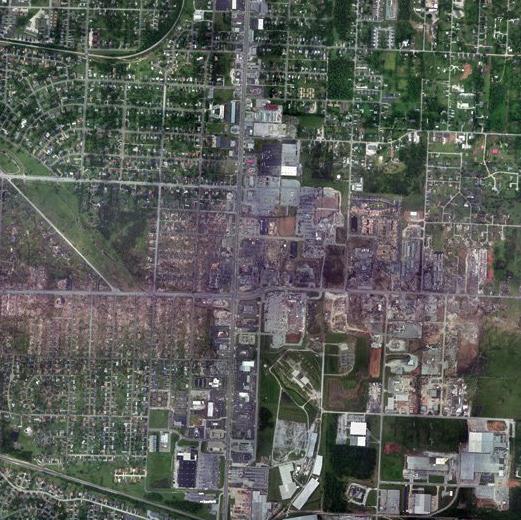 Aerial image in the immediate aftermath of the May 22, 2011 Joplin tornado, showing a nearly 1 mile wide damage path through the heart of town. Courtesy: NOAA.

In spite of sirens sounding and 24 minutes lead-time many residents of Joplin, Missouri failed to take cover at 5:39 pm on Sunday, May 22, 2011. Many locals wandered into their yards, only to see a huge, black cylinder forming on the west side of town. The EF-5 monster-tornado was so large and "rain-wrapped" that it didn't even resemble a traditional tornado - it looked like a thunderstorm that had pushed down all the way to ground-level. Not until locals saw flying debris and homes ripped off their foundations did they realize this wasn't just another false alarm. By then it was too late for many. 158 residents of Joplin died in less than 10 horrific, unimaginable minutes that left behind nearly $3 billion in damage. According to a NOAA post-mortem: "The vast majority of Joplin residents did not immediately take protective action upon receiving a first indication of risk." 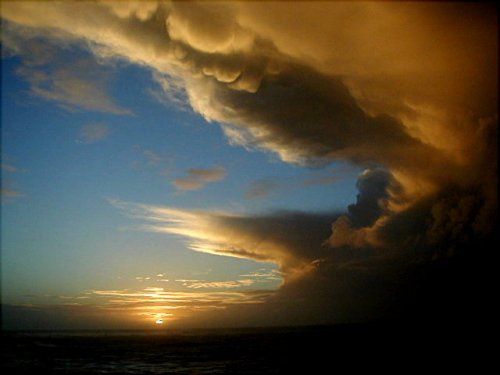 This is not an aberration. Be honest. The last time a tornado warning was issued for your neighborhood did you immediately make a run for the basement (or bathtub)? Or did you flip around the TV dial, maybe call up radar on your laptop or an app on your iPad? Did you wander to the window, or check the film in your camera and consider running outside to get that award-winning photo that would catapult you to instant fame (if not fortune?) It's a real problem. We've become a nation of second-guessing arm-chair meteorologists. Recent studies confirm that most of us don't do the right thing until we have multiple confirmations, from different sources, that the threat is real, and relevant. Meanwhile, an EF-4 is churning toward your house at 40 mph, and you're sitting there wondering why you have a weak WIFI signal. It's an accident waiting to happen, and I'm as guilty as the next guy.

Another challenge: unlike hurricanes, which are rated on a scale of 1 to 5, meteorologists still don't have the tools to be able to estimate, in real-time, how severe a developing tornado might be. Running hyper-local weather models from coast to coast might help, but the plain truth: we simply don't know if a spinning storm on Doppler will go on to spin up a minor EF-0, capable of minor roof damage and broken tree limbs, or an awe-inspiring EF-5, capable of steam-rolling homes into oblivion, turning towns into instant war-zones. We may get there in our lifetime, but this is a huge meteorological problem. 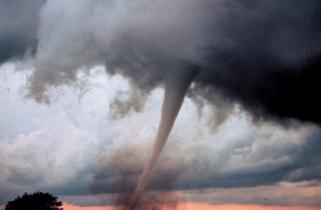 Today a generic "Tornado Warning" is issued - for a 5 minute, 70 mph EF-0 - or a mile-wide EF-5, capable of 200 mph winds. Meteorologists choose their words with extreme care, and NOAA is now embarking on an experimental program in a few Midwestern markets to make their "Impact Based" Tornado Warnings more emphatic, choosing more strident words (like "unsurvivable") that will elicit a definitive call to action and rouse people out of any lingering sense of apathy. But it may still not be enough.

How do we break through a dangerous wall of apathy? As a meteorologist who has tracked tornadoes for 35 years, even chased them out in the field, I have a suggestion. Modify the current system. Consider 2 different classifications of Tornado Warnings, based on conditions on threat level:

"Tornado Alert": issued when a rotating thunderstorm is increasing in intensity, with nearby environmental conditions favorable for tornado development. A Tornado Alert would still activate NOAA Weather Radios and "crawls" on the bottom of your TV screen. It would be a call to action for people in the path: "Stay alert; this storm is dangerous. This dangerous thunderstorm may drop a tornado at any moment!"

"Tornado Emergency": issued when a confirmed tornado is on the ground, spotted by SKYWARN spotters, trusted, professional storm chasers, or law enforcement - or - detected on a new generation of National Weather Service "Dual-Polarization" Doppler radar systems. With new software and hardware these government Dopplers are capable of detecting a "debris ball", the actual debris signature kicked up by a tornado within 50-75 miles of the radar site.

Hurricanes have a classification system from 1 to 5; so do severe winter storms in some markets. Why not differentiate between a THREAT of a tornado, and a CONFIRMED tornado on the ground? Be honest with people in the potential path of these life-changing storms. Americans are smart enough to understand the difference and act accordingly. You might not head right to the basement for a Tornado Alert, but people would be on alert, ready to take evasive action if the Alert is upgraded to an Emergency.

A possible downside: people in a Tornado Alert area don't take the threat seriously and continue to go about their business. But this is already happening today. A frightening percentage of Americans totally ignore tornado warnings, and place too much faith in sirens, WWII technology never designed to be heard indoors. 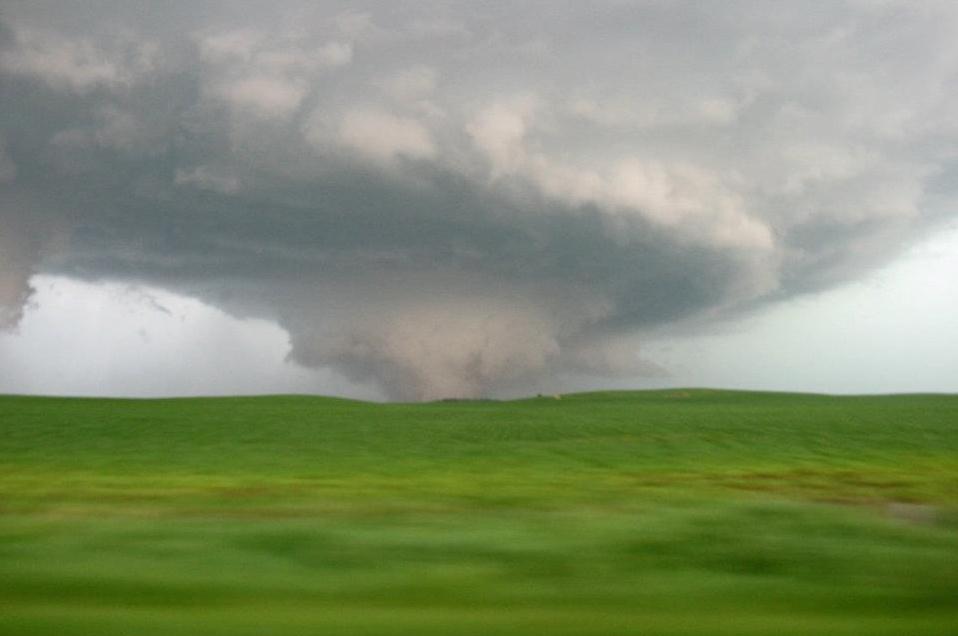 My purpose in writing this post is not to embarrass The National Weather Service. Their meteorologists do a remarkable job under difficult, sometimes maddening circumstances. NWS meteorologists are rewarded for "POD", Probability of Detection, tracking down and warning on EVERY strongly rotating storm that might go on to spark a twister. But this strategy results in an intolerably high "FAR", or False Alarm Rate, which breeds skepticism, apathy, and people sitting on their couches, when they should be making a mad dash to their basement or interior bathroom. For more on striking a safe balance between probability of detection and false alarm rates check out this paper from The American Meteorological Society. Not exactly light reading - but critically important.

Let's start a dialogue. Let's have a rational discussion about new and more effective ways to leverage the English language and tornado terminology to further refine the warning process. I don't pretend to have the answer key, but, like every other meteorologist in the USA, I'm growing increasingly concerned about the frequency and ferocity of 2012's tornado season. With Doppler radar we're seeing small/brief tornadoes that went largely unnoticed 30 years ago. That means more Tornado Warnings, and - sadly - a dangerous sense of "Tornado Fatigue" has set in, at a time when large, violent tornadoes are showing up in unexpected cities, where locals are unaccustomed to running for their lives.

One of these days a huge, EF-4 tornado will bulldoze a close-in suburb or downtown, killing over 1,000 people, as I speculated in a recent post. There will be a public outcry. Congressional investigations. "How could this happen?" "Why weren't we prepared?" "Why weren't we warned?"

The good news: the odds you'll ever be involved in a major tornado are infinitesimally small. Not winning-the-Lotto-small, but you don't have to worry about a tornado lurking around every corner. Statistically, less than 1 thunderstorm out of 100 will ever go on to generate a tornado. The movie "Twister" glamorized tornadoes, as only Hollywood can. Swinging over a well, strapped to Helen Hunt, as an EF-5 rages overhead probably isn't going to happen anytime soon. The sad reality: tornadoes are nature's most capricious wind - and the results are often otherworldly. If you could have walked through the rubble of Joplin or Tuscaloosa minutes after these prosperous cities had been pulverized into oblivion, your excitement about "seeing a tornado", that adrenaline rush, would quickly fade. 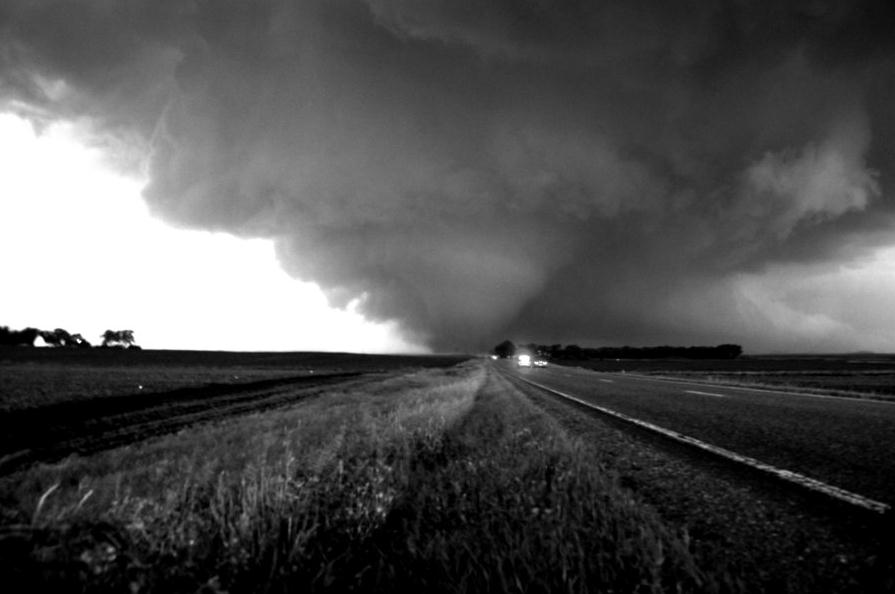 "Wedge Tornado". Photo courtesy of Aaron Shaffer, taken near Albert Lea on June 17, 2010, the year Minnesota saw more tornadoes than any state in the USA (145 according to NOAA's SPC).

Add NOAA to a long list of things to be thankful for. They have a Herculean task, and an admirable track record. But that doesn't mean we can't make the warning process more efficient and more effective. We can do a better job of setting tornadic expectations - and ultimately saving lives. Transitioning from Tornado Warnings to "Tornado Alerts" and "Tornado Emergencies" is just one step we can take to keep Americans better informed. As a nation we have to do everything in our power to make sure that people in the path of potentially devastating tornadoes get the life-saving information they need to survive. Anything less is simply unacceptable.