As a condition of its massive merger with NBC, the federal government is requiring Comcast to make affordable Internet connections available to 2.5 million low-income households for the next two years.

In promoting the program, Comcast's Executive VP David Cohen, has made some unexpected admissions:

"Access to the internet is akin to a civil rights issue for the 21st century," said David Cohen, Comcast's executive vice president. "It's that access that enables people in poorer areas to equalize access to a quality education, quality health care and vocational opportunities."

It was only after the federal government mandated a low-cost option for disadvantaged households that Comcast realized everyone could benefit from access to the Internet. Sadly for Comcast, it has done a poor job of reaching those disadvantaged communities, by its own admission:

"Quite frankly, people in lower-income communities, mostly people of color, have such limited access to broadband than people in wealthier communities."

This is why so many communities are building their own next-generation networks - they know that these networks are essential for economic development and ensuring everyone has "access to a quality education, quality health care and vocational opportunities." And they know that neither Comcast nor the federal government are going to make the necessary investments. They need a solution for the next 20 years, not just the next 2. 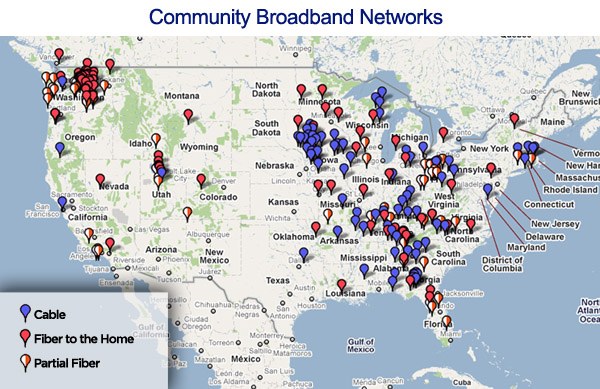 Comcast has a de facto monopoly in many communities. Modern cable networks offer much higher capacity connections than older phone networks using DSL. So unless you are one of the few Americans served by a community fiber network or FiOS, you probably have two choices in broadband: relatively faster connections from a cable company or relatively slower connections from the phone company. Private sector competition is not around the corner - overbuilding a massive provider like Comcast is very difficult, which is why so few companies try.

Due to the limited competition, Americans pay their cable companies too much for access to the Internet. Consider that Tacoma residents pay less for the same services as those in Seattle, because Tacoma long ago built its own cable network.

Comcast uses its vast profits to lobby Congress and the Federal Communications Commission to repeal rules that stop big cable and phone companies from slowing down competitors like Netflix.

This is the rub. Comcast builds and operates networks to maximize its profit -- a model that simply does not fit essential infrastructure like the Internet. Who would invest in FedEx if UPS owned the roads and set the rules for access?

The question is how to solve this age-old problem. Even Comcast recognizes that its normal approach leaves millions behind. We can do better.

Chattanooga has the nation's most advanced citywide network. Tiny Kutztown has kept an extra $2 million in its citizens pockets through lower bills over the past 10 years. Rural Windom kept employers in town when incumbent providers could not meet their needs.

Smart communities invest in themselves rather than depending on big, absentee corporations. Requiring Comcast to provide affordable broadband connections is better than not, but continuing to let Comcast effectively decide who can afford access to the Internet is madness.

Telecom Director at the Institute for Local Self-Reliance