Longmont, Colorado has become ground zero for the battle over the future of access to the Internet. Because big cable and telephone companies have stopped us from having a real choice in Internet Service Providers and failed to invest in adequate networks, a number of communities have built their own networks.

Chattanooga boasts the nation's best citywide broadband network, offering the fastest speeds available in the nation -- and the community owns it. That means much more of the money spent by subscribers stays in town, supporting local jobs.

Longmont, a town near Boulder with 80,000 people, offers a glimpse at how difficult it can be for communities to make any level of broadband investment -- the big cable and phone companies hate any potential competition, no matter how limited.

Longmont's elected officials all agree they need better broadband options to spur economic development. That's why they put a referendum on the ballot that will allow the city to use its existing assets to improve local broadband access. Not only are the mayor and city council unanimous in support of the referendum (2A) necessary for this, their opponents in the city election overwhelmingly agree also! And the local paper just editorialized in favor of it as well.

Who then, is spending hundreds of thousands of dollars to derail it? Comcast and its allies, of course. And this isn't the first time.

Back in the 1990s, the municipality-owned electric utility built a fiber ring to modernize its electrical grid. They took the opportunity to lay more fiber-optic cables than they would need, knowing that they could later be used by the city or partners to expand broadband access for all businesses and resident.

Over several years, the City worked with a variety of partners to spur broadband deployment locally but a new state law in 2005 gutted their ability to work with private partners to expand broadband. Qwest had just pushed what become known as the "Qwest law" through the Colorado legislature. Starting in 2004, telephone and cable companies used their clout in legislatures across the nation to prevent communities from investing in broadband infrastructure. Now Longmont would have to pass a referendum to allow local businesses and resident to use a network the town built years earlier.

In 2009, Longmont attempted to pass the referendum but Comcast and allies dumped over $245,000 into a "Vote No" campaign that spread fear and misinformation far and wide, resulting in 56% of the voters saying no. They set a record in local campaign spending, dwarfing previous amounts from all sides in any Longmont election.

But after the election, when many learned they had been fooled by anti-competition propaganda, they wanted to revisit the issue. On November 1, they have their chance. But again, Comcast and allies are pouring millions into a campaign of misinformation. Their group has already been busted for erroneously claiming the mayor is against the initiative when he has been unequivocally in favor of it. With two weeks to go before election day, they have already surpassed their previous records by spending $275,000 while the pro-2A groups have yet to expend even $5,000. The true grassroots groups are making do with a website and volunteers countering Comcast's misinformation. 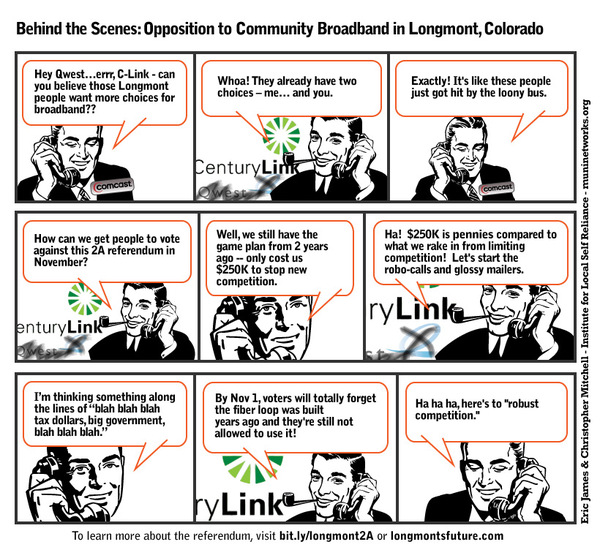 The question is whether big companies like Comcast can again fool more then 50% of the voters with their glossy mailers and robo-calls. This is the real problem -- the debates have shown that the opposition to this measure comes almost entirely from outside the community. But Comcast's ability to flood the papers, airwaves, phones, and mailboxes with market-tested anti-government messages is unrivaled. The big cable and phone companies use the same tactics across the U.S., protecting their high prices and poor services from the only real threat of competition they face -- local community investment.

The most recent mailer threatens that a broadband project would raise taxes, an outright lie given that the referendum text starts, "Without increasing taxes, shall the citizens of the City of Longmont..." But the anti-2A groups care about preserving Comcast's market power, not being truthful.

Longmont could join the growing movement of communities that invest in their own broadband networks to ensure fast, affordable, and reliable connections creating local jobs and offering local benefits.

While big citywide networks like Chattanooga's Gig Network have captured plenty of attention, hundreds of communities have made smaller investments -- like the ring Longmont build 14 years ago. Often without even borrowing money, local governments are expanding fiber-optic rings and connections to encourage economic development, create jobs, and lower the cost of providing city services.

This could be the future of access to the Internet -- local initiatives benefiting local stakeholders, putting the needs of the community before the desires of distant shareholders. Longmont makes its decision on November 1. When will your community make yours?