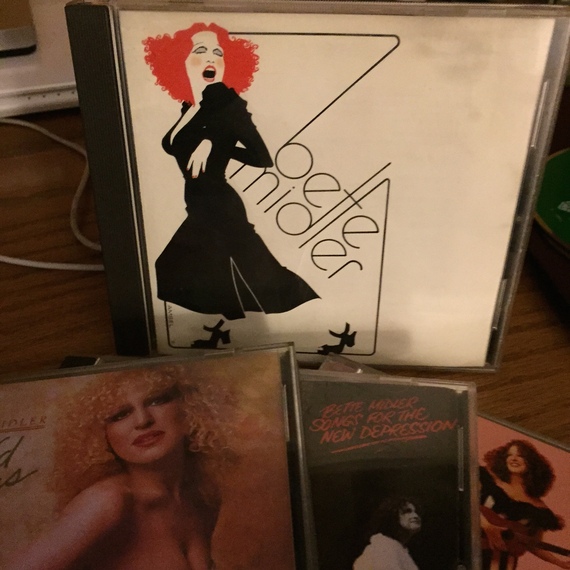 For years the rap on Bette Midler has been that if you want to "experience the divine" (to use the title of one of her periodic, increasingly elaborate stage revues), you have to see her live. After all, she got her start on the steamy stage of New York's Continental Baths, singing for the towel-clad, all-male, all-gay patrons, and for those of us who were there at the start, she's still the most electrifying live performer of our generation. (No, I wasn't quite old enough to make it to New York by the early '70s, but I caught up with her soon afterwards.)

Midler has been barnstorming the stages of the world ever since, but that hasn't stopped her from enjoying massive hits with self-described "inspirational ballads" like "Wind Beneath My Wings" and "From a Distance." But her humor, pathos, and freewheeling joie de vivre are not always easy to capture in three- and four-minute sequences on disc. The release of her 25th album, the girl group tribute, It's the Girls, reminds us all over again that Midler is not only a commandingly theatrical personality, but a recording artist with the interpretive skills of the most versatile of actresses.

Her first two albums, The Divine Miss M (1972) and Bette Midler (1973), set the template for Midler's recording career, and all her best albums have followed it closely. Working with her longtime arranger-producer Barry Manilow (yes, that Barry Manilow, Mr. Middle-of-the-Road Schlockmeister), she filled these two discs with a head-spinning range of material -- much of which she had introduced at the baths. (She knew her audience, too. Leading into Leon Russell's "Superstar" she said, "This is the song where everyone always gets up and leaves. But the span of attention is this place is so short anyway. What's a song? It only takes a song, right?")

The albums were a gleeful recycling bin of several decades of popular music: Kurt Weill and Bob Dylan, Hogey Carmichael and Carole King, and always, the girl groups. On these two albums alone she covered the Andrew Sisters ("Boogie Woogie Bugle Boy"), the Shangri-Las ("Leader of the Pack"), the Chiffons ("Chapel of Love"), the Shirelles ("Do You Wanna Dance?"), and the Crystals ("Uptown," "Da Doo Ron Ron"). Midler's ability to effortlessly slip into a variety of musical persona tied these disparage songs into a unified and deeply satisfying listening experience. The best Bette Midler albums, like the Beaches soundtrack (1988) and Bathhouse Betty (1998) are like watching (or listening to) a great repertory actress take on a breathtaking range of portrayals.

Not every album works out that way. When she tries to jump on bandwagons, like 1983's new wave No Frills or the ballad-heavy Bette of Roses (1995), monotony sets in. No less a Midler fan than film critic Pauline Kael once wrote, "It's not that she's a bad singer but that her voice alone isn't very distinctive--it lacks personality." Without the opportunity for characterization, Midler's "straight" singing is bland and forgettable.

My nominee for all around "Best of Bette" is her 1979 Thighs and Whispers. Released at the height of the thump-thump era, fans know it as her "disco album," and while more than half its songs are variations on that genre, Midler wrings a remarkable range of vocal characterization and emotion from them. The big band disco of "Big Noise From Winnetka" and Village People camp of "My Knight in Black Leather" are the least of it. "Married Men" has all the trappings of high disco, including the four-on-the-floor beat and the "Whoo! Whoo!" seagull chirps of the background singers. But Midler admonishes her female listeners ("Don't trust 'em!") with the same throat-ripping passion she brought to the rock anthems from The Rose. She offers a beaten down, yet lyrical reading of James Taylor's "Millworker" that conjures images of Sally Field's textile worker in Norma Rae, the winner of that year's Oscar race against Midler's Rose.

"Cradle Days," a slab of redneck soul, just might win the prize for Midler's best all-time vocal performance. Cushioned by rich, creamy background vocals arranged by Luther Vandross, Midler runs the emotional gamut from resignation to defiance as she alternately pleads with and excoriates a faithless, longtime lover. When she cries, "You took my darlin' babies from me/You really broke my heart in two/God in heaven knows that I loved you/And in your heart you know its true," she summons the primal force of a modern-day Medea. It's a perfect example of Midler's melding of ferocity and nuance as a singing actress, and is at least the equal of her more celebrated rip-your-guts-out performances like "Delta Dawn" and "Stay With Me."

The familiar girl group songs, mostly from the '60s, on It's the Girls don't offer Midler the same opportunities to show off her vocal and dramatic skills. But working closely with producer Marc Shaiman (her longtime musical associate) there's more variety than you'd expect as she revisits the sounds that were a particular favorite in her early performances. She's in full gay icon glory singing the Shangri-Las' "Give Him a Great Big Kiss" or the Exciters' "Tell Him" as if to the boys at the baths. She swings effortlessly as she self-harmonizes on the Andrews Sisters' "Bei Mir Bist Du Schon" and the title song from the Boswell Sisters. She slows down the perky teen angst of Martha and the Vandellas' "Come and Get These Memories" to make it a rueful consideration of a middle-aged break-up. The most audacious performance is of TLC's "Waterfalls," in which Midler casts herself as a grieving mother whose son falls victim to urban crime and AIDS. Her understated vocal let the sorrow speak for itself and make "Waterfalls" a latter-day classic to stand alongside John Prine's "Hello in There."

More importantly, It's the Girls shows Midler as nimble and versatile as ever. While her contemporaries have settled into grand stateliness or offer wispy remakes of their former glories, Midler, at 69, continues to push herself forward, as she demonstrated with her return to Broadway last year in John Logan's one-woman play, I'll Eat You Last: A Chat With Sue Mengers. Come and get these memories, indeed! As she gears up to tour in 2015 for the first time in a decade, Midler is still actively making memories for both her original gay fans and more than one generation of newer ones (of all sexualities), and showing that as a recording artist she continues to be divine.