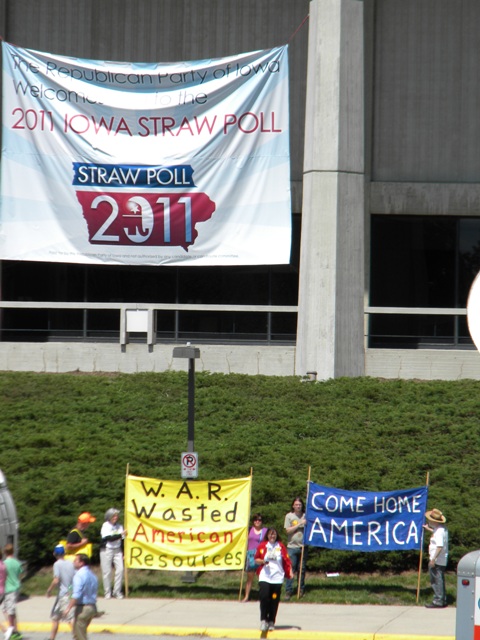 The Des Moines news reporter who noted our anti-war message at the entrance of Saturday's Republican Straw Poll in Ames, Iowa, did not stay around long enough to see the real story. Our banners actually got an amazingly good reception! 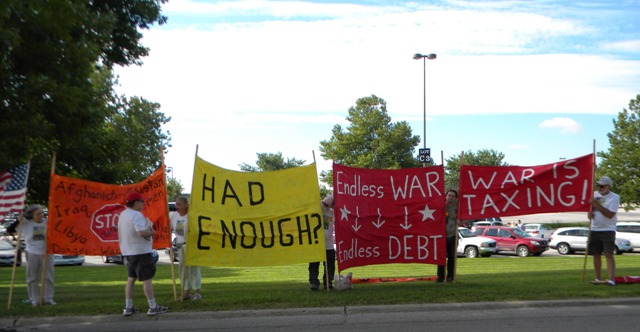 Positioned as we were at the entrance to the event, we were surprised at how many of the thousands of straw poll attendees (even those clad in Pawlenty and Santorum t-shirts) responded positively to the "Come Home America" message. Banners warning that "Endless War = Endless Debt" and "War IS Taxing" resonated with people of all political (conservative, libertarian, and socially progressive) backgrounds who stopped to talk, with some even giving up an hour or two of their time to help us hold the banners. 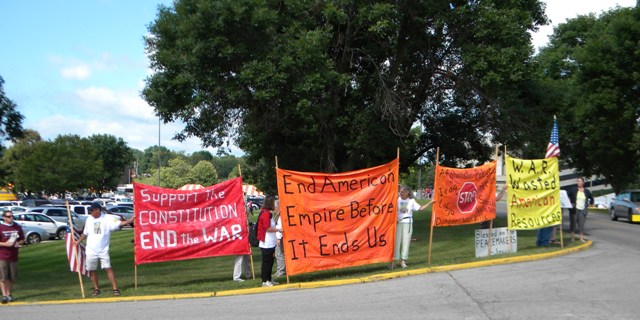 Attendees seemed genuinely interested when we encouraged them to sign our recent "Dear Obama" letter and told them we were part of a non-partisan effort focused on the most important ISSUES of the day, instead of the promises, slogans, cute winks and other crazy antics of any particular political candidate.

The truth is that progressives who support social safety nets, funding of public education, and who are opposed to the widening disparity between the wealthiest and the poor cannot possibly see their goals realized without the US government changing course away from the last decade of destructive and costly wars. Libertarians will not see restoration of civil liberties, adherence to the Constitution and away from national security policing and "War Presidency" empowerment. "Greens" will not see more funding and research diverted to sustainable and environmentally clean energy technologies. And fiscal conservatives cannot possibly get the small, decentralized government they long for while the United States seeks costly world empire and military superpower status. 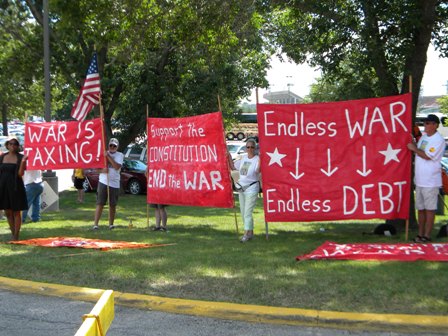 All of these worthwhile goals are connected by money and are antithetical to the US' spending on runaway militarism. If the American government continues to be controlled by the military-industrial-congressional-media complex, in defiance of this popular consensus, throwing away trillions of hard-earned and increasingly scarce taxpayer dollars on bombs, drone technology, armoring tanks, and outright corporate contractor fraud, none of these other objectives are possible.

So while hundreds of national media in Iowa covered the actual, close straw poll finish (near tie) of Michele Bachmann (only beating Ron Paul by 152 votes) and did not seem to care or cover the enormous outpouring we witnessed from people of different political backgrounds and loyalties, the consensus for ending the wars and runaway militarism is building. Numerous polls confirm we're approaching a unique moment where a variety of rationales for ending the wars are coming together that transcend prior political differences.

In any event, look for our Come Home America initiative and banners to represent this remarkable convergence outside some of Obama's upcoming speeches as well as other major political events throughout the nation. By strengthening the emerging consensus, it may be possible to end the insanity of these wars. While politicos and horse race bettors constantly talk of making their selections using the "lesser of two evils" formula, one thing is clear. It is the issues that matter more than the political personalities and unjust, unnecessary WAR is not the lesser of two evils! It is THE EVIL that corrupts and contaminates everything else. 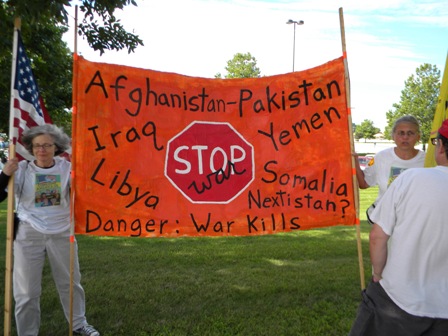