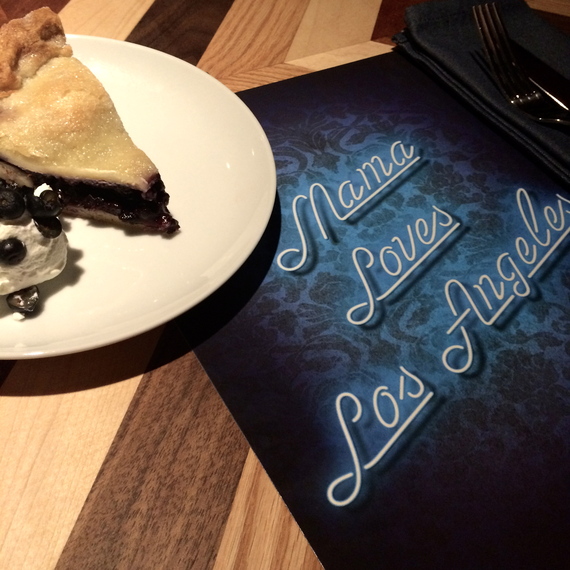 There's a new star in Hollywood and her name is Mama. Mama Shelter, that is.

As a designer, slash, travel blogger, I like to think that I have my finger on the pulse of, well, design and travel. Imagine my delight when I discovered that I would be in Los Angeles just when the ultra-cool French hotel brand, Mama Shelter, would be opening their first United States outpost. In fact, the hotel had just been open two weeks when I arrived, so the atmosphere was buzzing with the energy of a production being launched. Even the neighbors were poking their heads in to see the unveiling (literally, because the building, an abandoned hotel built in the 1920's, had been covered in tarps during construction) of the groovy new hot spot.

In 2009, the Trigano family (Gilbert Trigano was co-founder of Club Med) opened their first Mama Shelter hotel in Paris. Renowned designer, Philippe Starck, created a space that was innovative and contemporary, with all the personality of the hotel's city of light location. After three more successful hotels in France and one in Istanbul, it was time for Mama to come to the States, and she was destined to go to Hollywood: Benjamin Trigano, grandson of Gilbert, lives in L.A. and owns M + B Gallery in Beverly Hills.

Just a few blocks away from the famous corner of Hollywood and Vine, Mama Shelter Los Angeles is every bit as fabulous as I expected it would be.

Designer, Thierry Gaugain, former head of design at Starck's studio, has included the iconic design elements from Starck's European Mama Shelter hotels: a DJ station, foosball table, and graffiti on the chalkboard-black ceiling in the open-plan reception area/bar/restaurant, and zany masks on sconces in the guest rooms. Gaugain has also brought his own voice, loud and clear, infusing the hotel with the fun and funky character of Los Angeles. There's the classic California architectural details of white stucco walls and Spanish tile floors, and decor that includes kitschy lamps, Mexican blankets draped over benches, surfer magazines, and vintage post cards tucked into mirror frames. 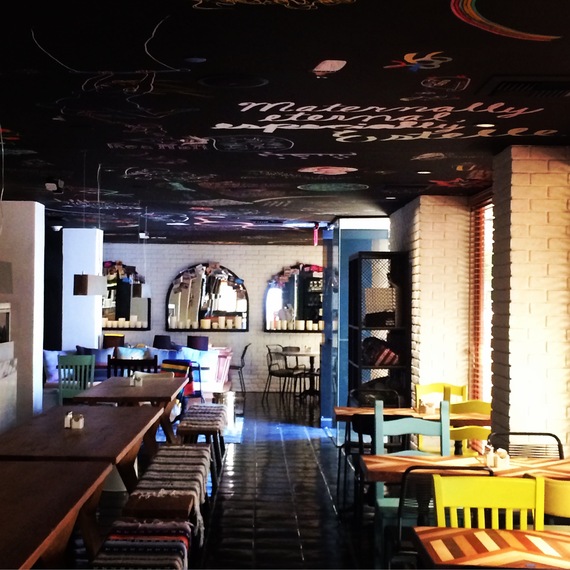 The design scheme of the guest rooms is both bold and effortless, and the space planning is nothing short of genius. This quote from designer, Gaugain, pretty much says it all: "Luxury is essential, but it is never present in the obvious. It's like light: you can see it on things, but you can never see light itself."

A king bed, dressed in crisp white against a blonde wood headboard, took center stage in my room, on a black and white audaciously-patterned carpet. The room safe doubled as a nightstand, and a large iMac provided internet, TV, and a photo booth...guest photos and videos show up on a monitor in the lobby. (Philippe Starck's quirky masks on the bedside sconces make their appearance in many of the photos.) Movie scripts on the work surface next to the computer give a wink and a nod to the Hollywood location.

A word about the ceiling. It's black. You've got to be gutsy to paint a ceiling black. I couldn't stop looking up at it, marveling at how it made a smallish-sized room feel like it had no ceiling at all. To infinity and beyond. 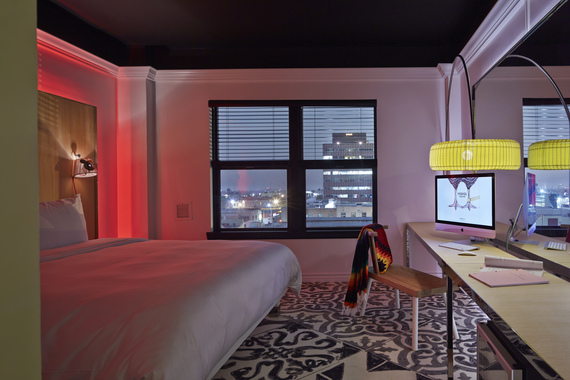 Let's just all agree that the design of the hotel is awe-inspiring. However, in a conversation with Benjamin Trigano, I learned about the unseen aspects of Mama Shelter that are vital to the hotel's success. He maintains that good service is of utmost importance. I will attest that the staff is well aware of this credo. Not only are they friendly and efficient, but they love working there, and it shows. 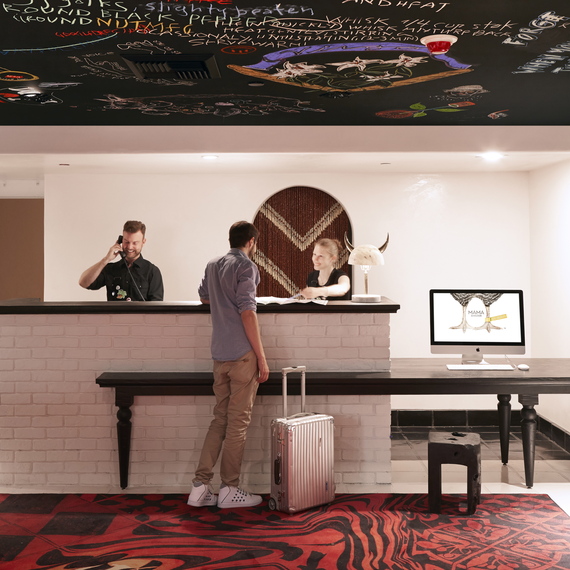 From the valet attendant on the sidewalk and the folks at the reception desk, to the hotel maids and waiters in the restaurant...one and all exuded job satisfaction, and some even expressed appreciation for the support of their employers. One gregarious waiter is an aspiring singer, and he was fired up by their suggestion that he give some tracks to the DJ to play in the hotel. Everyone has a smile on their face, and I couldn't turn a corner without someone asking how my day was going and if I needed anything. It's a beautiful thing.

When asked about the extremely reasonable room rates, Trigano had a ready answer.

"We don't want the hotel to be exclusive to the wealthy. It's important that we have a mix of clientele."

As we sat in the restaurant (where French chef, Ben Bailly serves up healthy classic diner food), he looked around and pointed out a music executive, a film producer, and a group of fun-seeking millennials.

"We want all the diverse characters that make Los Angeles extraordinary to not just crash here but to live, work, laugh, debate, celebrate, and at the end of the night, to come home to MAMA." 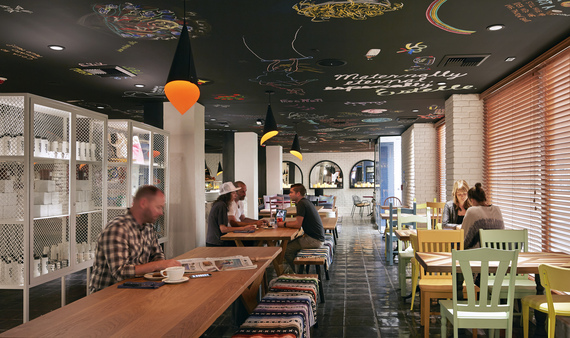 FOR MORE STORIES AND TRAVEL RECOMMENDATIONS FROM A DESIGNER ABROAD, GO TO JUSTONESUITCASE.COM