1968. That was a hell of a year. The people were on the streets, revolution was in the air, we released the White Album, and perhaps the most influential photograph of all time was taken by an astronaut called William Anders.

It was Christmas Eve. Anders and his mission commander Frank Borman had just become the only living beings since the dawn of time to orbit the moon. Then, through the tiny window of their Apollo 8 spacecraft their eyes fell upon something nobody had seen before, something so familiar and yet so alien, something breathtaking in its beauty and fragility. "Oh my God!" Borman cried. "Look at that picture over there! Here's the Earth coming up. Wow, is that pretty!"

"You got a color film, Jim?" Anders snapped back. "Hand me that roll of color quick, will you..." For a minute or so, two human beings in a tin can nearly 400,000 kilometers from home scrambled furiously to fix a roll of Kodak into their camera. Then Anders lifted it to the window and clicked the shutter and captured our delicate home planet rising slowly over the horizon of the moon. Earthrise. That single image made such an impact on the human psyche that it's credited with sparking the birth of the global environment movement -- with changing the very way we think about ourselves.

That was more than 40 years ago, the blink of an eye in the grand sweep of time, but something quite remarkable has happened since then. For at least 800,000 years the Arctic Ocean has been capped by a sheet of sea ice the size of a continent. But in the decades since that photo was taken, satellites have been measuring a steady melting of that white sheet. Much of it has now gone, and it seems likely that there'll be open water at the North Pole in the lifetimes of my kids. I might even see that moment for myself.

Think about it. Since Earthrise was taken we've been so busy warming our world that it now looks radically different from space. By digging up fossil fuels and burning our ancient forests we've put so much carbon into the atmosphere that today's astronauts are looking at a different planet. And here's something that just baffles me. As the ice retreats, the oil giants are moving in. Instead of seeing the melting as a grave warning to humanity, they're eyeing the previously inaccessible oil beneath the seabed at the top of the world. They're exploiting the disappearance of the ice to drill for the very same fuel that caused the melting in the first place. Fossil fuels have colonized every corner of our Earth, but at some time and in some place we need to say, "No more." I believe that time is now and that place is the Arctic.

That's why I've joined Greenpeace's campaign to create a legally protected sanctuary around the North Pole and a ban on oil drilling and industrial fishing in Arctic waters. My name will be among at least 2 million that Greenpeace is taking to the pole and planting on the seabed 4 kilometers beneath the ice. We're coming together to secure the Arctic for all life on Earth.

In just one month, more than a million of us have already signed up at www.savethearctic.org, but if you're not one of them there's still a chance to ensure your name is planted at the bottom of the ocean at the top of the world.

And if you, like me, are irresistibly drawn to the stunning Arctic wildlife, then you'll want to join the Arctic Rising online movement. You can choose to be one of five animals -- a polar bear, a snowy owl, an Arctic fox, a walrus or a narwhal. Once you've joined an animal clan you hunt in a pack for new supporters for the campaign and compete against the other animals to get new people involved. It's a kind of Earthrise, where we try to spark the dawn of a new mass movement, one that draws a line in the ice and says to the polluters, "You come no further." So now I've got to decide which animal I'm going to be.

Yeah, you've guessed it. I am the Walrus. 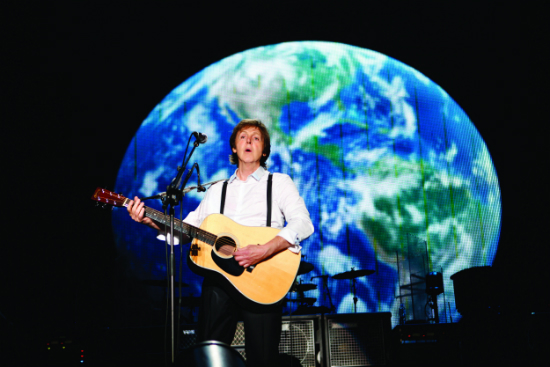