Almost four years ago, I underwent a seemingly routine outpatient surgical procedure - a laparoscopic hysterectomy to remove massive fibroids. I had an overnight stay and was discharged the following morning. A week later, I suffered a small bowel obstruction and had surgery to unkink the obstruction. While in the hospital, I began to leak what appeared to be urine and soaked many, many pads. I was told that my organs were paralyzed from the surgeries, that the leakage was normal and that it would stop. I was sent home after fourteen days still leaking.

A week later I woke up with a high fever and body chills and was back in the hospital. I was informed that my left ureter had been transected, cut during my laparoscopic hysterectomy. My urine-filled abdomen was the cause of the non-stop leakage. For the first time, I cried. I had no idea what a transected ureter was and what it meant. Five days later I was sent home with a nephrostomy tube inserted in my left kidney and a urine bag strapped to my left leg. I would need to wait seven weeks for surgery to repair my ureter. These were the seven most tear-filled weeks of my life. My ureter was repaired, and the nephrostomy tube and urine bag were removed.

I was hospitalized a collective 26 days. I lost 20 pounds. I lost some of my hair. I suffered painful stiffness all over my body -- my arms, shoulders, hands, fingers, and knees -- as a result of Cipro toxicity. I was diagnosed with rheumatoid arthritis. A finisher of many half-marathons, marathons, and ultra endurance races, I was unable to dress myself for about nine months. I was on medical leave for six months, unable to work, and to run.

The doctors were amazed that I was not more critically ill, if not worse. Urine had been floating in my body for over a month and sepsis had not taken me! They were amazed when I told them that, three days before the hysterectomy, I had placed third in the women's division of the 2012 Around-the-Lake 24-hour ultra run in Wakefield, MA. Had I not been so physically fit with such a strong immune system, I probably would not have survived! 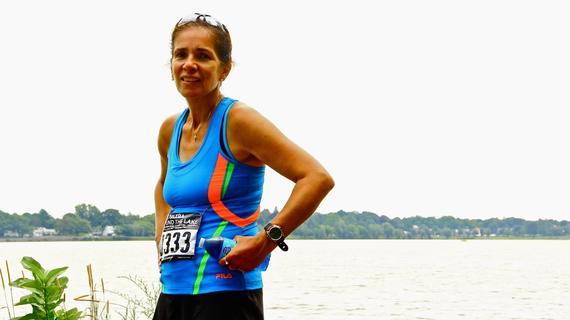 The author at the Around The Lake ultra in Wakefield, MA. © Sebastian Gilbert, 2012
Advertisement

How Ultrarunning Saved My Life

I have been running 50-mile, 100K, 100-mile and 24-hour ultras over ten years. I am an ordinary, non-elite ultrarunner. I know what it takes to persevere and endure the long miles in the heat of the day, the cold of darkness, and in downpours, thunder and lightening, to endure blood blisters, fatigue, a beaten body, delirium and mental exhaustion, and to overcome these obstacles after miles and months of disciplined training.

Little did I know that all my years of running had afforded me a strong immune system that conditioned me to physically and mentally survive my overwhelming life-threatening obstacle. My medical challenge was an endurance run of a different kind. I prepared for my surgeries with the same physical, mental, and spiritual discipline and determination I apply to running ultras. But now my body blisters came in the form of abdominal pain and incisions, and healing scars. My fatigue and mental exhaustion came in the form of severe insomnia and sleep deprivation, not unlike the sleep deprivation that comes with running ultras.

I approached my medical challenge and the healing of my surgically beaten, battered, and weakened body with the same discipline and focus I have always approached my running -- with calculated steps, great patience, and faithful perseverance. To help me overcome the physical pain of the surgeries, I envisioned crossing the finish line of my last ultra and all the ultras in between, but now I had been reduced to taking baby steps. I went on very slow, short walks with my husband. My first 1.7-mile trail walk took me one hour. However, I have learned to never give up by remaining upbeat, staying positive and ever praying.

The Spirituality of Running

In the Bible, running is a metaphor that teaches about strength, discipline, encouragement, perseverance, endurance, suffering and hope. When I run ultras, I carry with me the Ultrarunner's Prayer and scripture passages to help me cope in moments and miles of extreme exhaustion, doubt, and decreased cognitive functioning. During my medical ordeal, I was reminded of Hebrews 12:1 and to run with endurance this race that God had put before me. I meditated on Isaiah 40:30 - 31: ... but those who hope in the Lord will renew their strength. They will soar on wings like eagles; they will run and not grow weary; they will walk and not be faint. I found comfort in Romans 5:3 - 4 where Paul writes: We also glorify in our sufferings because we know suffering produces perseverance; perseverance produces character; and character, hope. Scripture and prayer helped me to find strength in my adversity, to remain hopeful, to find meaning in my suffering, to heal and to be resilient. I survived my medical ordeal, crossed the finish line, and set my sights on my next ultra.

I began to walk more miles, and to slowly run and train for the Around-the-Lake 24 hour ultra again. My rheumatoid arthritis did not stop me. A year after almost losing my life, I put one foot in front of the other, and with the support of my crew and pacers, my husband and my son, I completed 64.28 miles. It was my run of thanksgiving and gratitude, and part of my healing journey. 2 Samuel 18:23 -- Come what may, I want to run -- became my new mantra. Today I continue to faithfully train and run ultras.