Tupac is not, as was erroneously reported, alive and well in New Zealand. He's actually fighting crime alongside Elvis and Bruce Lee.

That's the premise of Comeback Kings, the new comic book series that, through the benevolence of some Kiwi hacker, is suddenly timely in its playful and thoughtful tackling of the twin American mythologies of celebrity and superheroes. Written by Matt Sullivan and Gabe Guarente (disclosure: former co-workers of the article's author) and illustrated by Ethan Young, the comic places disparate entertainment icons, whose legends live today thanks to allegedly suspicious deaths, in a secret crime fighting force protecting the world from evil.

Playfully mixing together true details of the lives of its members -- Tupac, Elvis, Bruce Lee, Jim Morrison and Andy Kaufman -- and creating its own backstory in the years allotted by each of the stars' deaths, Sullivan and Guarente create an engaging hero story on its own while commenting on America's fascination with celebrity.

After disbanding their unit, the five incognito crime fighters -- Elvis is in a nursing home, Tupac is a suburban father, Andy works in a deli, Jim Morrison has ample sex -- are called back to leader Bruce Lee's secret headquarters, where they reluctantly agree to launch one more mission to save the world.

The concept works, Guarente and Sullivan say, because Americans want it to do so.

"There are clearly reasons why people WANT to believe that the conspiracy theories are true: it's part of the complicated mourning process," Guarente reasoned to The Huffington Post. "All these guys were taken from us too soon, and it's just more comforting to believe they're still kicking around somewhere, waiting things out."

"There's a need to explain their often genuinely mysterious deaths and to add mystery when the explanation is all too obvious," Sullivan reasoned. "A lot of the theories don't come out of nowhere: Andy talked of faking his own death and coming back -- death as performance art stunt. Tupac's Machiavelli fixation and constant references to his own death also lend themselves to speculation. The idea that he faked his death to save his life is very alluring."

In some ways, in fact, the comic can be healing to fans.

"Part of it may be what I said before about a certain denial happening -- we don't want to believe that they're really gone. But another part may be the very American notion of faith in invincibility," Guarente said. "These stars were so larger than life -- Elvis brought rock n' roll to the masses, Bruce Lee revolutionized action movies --that we think maybe they could have cheated death, too. We have trouble dealing with the fact that they all had very flawed, vulnerable lives."

Of course, playing with -- and considerably altering the legacies of -- such icons comes with a certain danger, but with ample research, a few special nods to fans and kind portrayals of each, the pair are confident they'll win over devotees of each of their characters.

"I think fans will recognize the mixture of reverence and irreverence in the book's tone, and appreciate the 'easter egg' references to the artists' work in addition to the over the top allusions," Sullivan said. "We are fans of these guys -- and in a way, this is our coping mechanism." 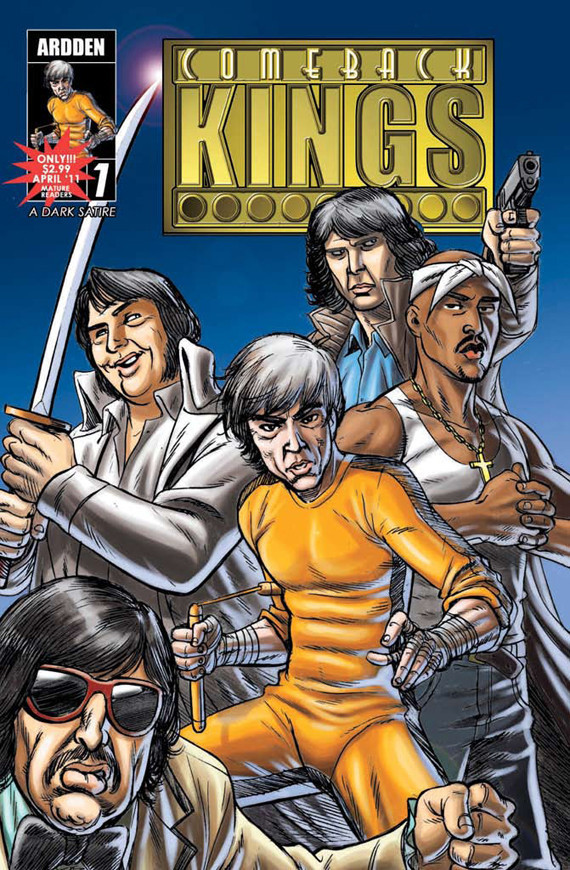 The first issue of Comeback Kings is in stores and available for sale online now, with three sequels on the way.