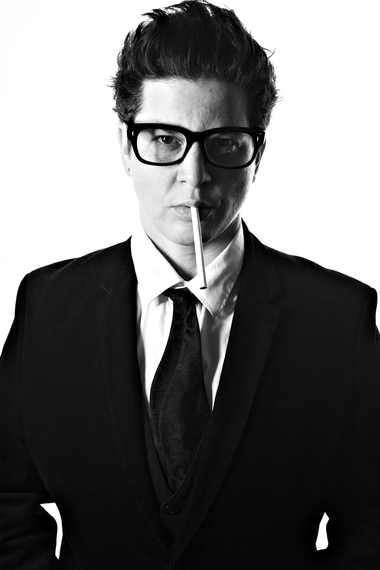 "I would be lesbian Maude," is the answer comedian Julie Goldman gives when asked which show she'd reinvent and cast herself in. As for who would play her gay best friend in the show, she deadpans: "Jonny McGovern."

With recent notable stints on The People's Couch, Big Gay Sketch Show, The Mindy Project and Faking It one might ask the obvious question: what's it like to (temporarily) trade in the comedy circuit for a role in front of millions of people in one fell swoop?

"I love being on television. It's so fun. I love the work. I love going to a studio or location. I love working with cool people and seeing all the crew and gear and stuff. I love it," Goldman said. "And, yeah, I love being recognized and meeting people all over the place. And I really love money. So, I'd really like to keep working..."

The fans in both mediums are completely different, according to Goldman.

"Mindy has some pretty rabid fans so it's been really fun. I would love to be able to reach such a wide array of people and the scope of audience you can get via TV is so vast," she said.

Even with a vast audience, Goldman is uncomfortably familiar with being misunderstood.

"Sometimes I feel misunderstood...sometimes people can get touchy or offended about certain subjects. I know there have been people who just see me as some big dyke (which is true of course) -- or think my material is too gay or too women-centered. [Some] people think I don't appeal to men, or I'm not sensitive enough to certain people," she said. And then in true Goldman fashion added, "Really at the end of the day...all those things are true and I don't give a fuck. So save it."

It makes sense that Goldman would have an unapologetic outlook on her comedy. Joan Rivers was, after all, one of her favorite comedians.

"She was so funny and vulnerable, and yet fearless and sensitive... outrageous, classy, tacky and complicated," Goldman said. "There was so much more to her than met the eye. When I got the chance to work with her, all those things were confirmed. I think people underestimated her and wrote off a lot of her comedy as mean, too much or she took it too far, and I think all of that is utter horse shit."

Goldman equated it to a gender issue.

"Had she been a man, none of that would have been said. In addition, so what? If she went too far or was mean sometimes -- I think she was held to an unfair standard that others were not," she added. "Really, though, I just thought she was hilarious and fun. I admired her and was a huge fan."

Regarding Fashion Police, Goldman was just as blunt.

"They need to let Fashion Police go. The show existed and worked because of Joan. There's no way it can continue. Kathy griffin just quit and it's just going down. Let it go. We had to say goodbye to Joan, and we need to say it to Fashion Police," she said.

"Goldman and the Art of Letting Go." This subject matter could easily be erected into a mini-series, book or tragic love story told on one Lifetime Television for Women.

"In sixth grade I auditioned for the school play Peter Pan and I was desperate to play Captain Hook. I killed it in the auditions. I mean killed it," she remembered. "Well , they wouldn't cast me as Captain Hook because I was a girl, so my mom called the school, yelled at them and lo and behold -- I got to play Captain Hook for one performance. I never knew she did that until five years ago."

Goldman added, "Mom, you kinda paved the way for some gayness."

Speaking of musicals, we next asked Goldman to answer some questions about her favorite (and least favorite) things a la Julie Andrews.

Favorite place to go to relax and unwind? If I were rich I would buy a beach house. As of now...just my couch.

Least favorite moment of your day on any given day? Putting on my bra to take the dogs out.

Goldman will headline the second annual Seattle Women's Pride presented by The Seattle Lesbian on Friday, June 19, 2015. Tickets are available via Stranger Tickets.