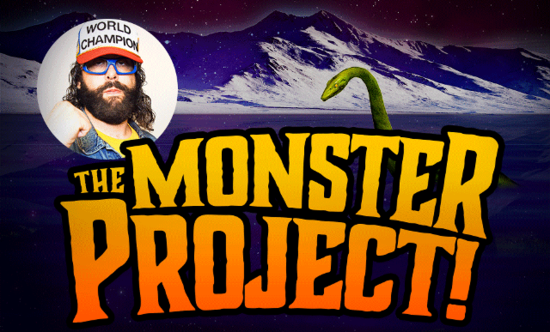 The Lake Champlain Monster, Jersey Devil, Chupacabra: They are elusive creatures of folklore and celebrities of the cryptozoology world - and they are about to meet the World Champion. Enter Judah Friedlander, best known as the comedian with a sasquatchian beard, long hair and penchant for trucker hats emblazoned with giant-sized statements proclaiming him the champ of all things. For nearly seven years, he was best known for the role writer Frank Rossitano on 30 Rock, but he is also a crypto enthusiast and the host of The Monster Project on the Nat Geo Wild network.

Premiering Oct. 26 at 8 p.m. ET, "Champ" says hello to the Champ. The paranormal field is a natural for an expert of all things such as Friedlander who wrote the book How to Beat Up Anybody: An Instructional and Inspirational Karate Book, which featured a chapter on fighting Bigfoots (and ninjas, T-rexes and three-armed men). And over the course of three episodes, all airing this Saturday, he performs the task of host and commentator, weighing in with his take on pre-recorded footage of various paranormal groups on an investigation.

But instead of beating up the paranormal groups - as a master of karate like Friedlander might be persuaded to do - he makes fun without being mean. He doesn't discredit, but also doesn't automatically believe, what is presented to him as evidence. The Monster Project serves as an introductory course in cryptids for newbies, while remaining entertaining for established fans of the paranormal pop culture genre. And Friedlander is kind of like a kinder, gentler Tosh.O of the paranormal (with karate skills).

Friedlander joined me for a discussion at the National Geographic offices in New York City to talk about The Monster Project. He was not forced to beat me up, but he did answer questions.

Did you have an interest in cryptozoology before this show came about?

"I've been obsessed with Bigfoot since I was a kid. I have always been a fan of the paranormal - cryptozoology - and I have Bigfoot jokes in my act, mermaid bits, UFO bits, all kinds of stuff. This show is basically a combination educating people about this stuff as well as having fun with it. I tried really hard not to make fun of anyone. My goal is to say, 'Hey, let's look at this stuff but have a sense of humor about it too.'"

How did you get involved with The Monster Project?

"The show came to me; it wasn't my idea. Ping Pong Productions, the guys that did Finding Bigfoot [on Animal Planet] did this show, and a couple of years ago they did a panel at New York Comic Con and asked me to host the panel because I'm a comic and Bigfoot fan... about a year or so ago, they came to me with this idea, and we did it."

So you count yourself as a believer?

"I'm definitely fascinated. Do these things exist? Do they not exist? I'm one of those people who is skeptical; I definitely realize there's a chance they don't exist. But maybe they do. And I would love to live in a world where Bigfoot does exist. I hope he is found. I challenged Bigfoot to fight me but he didn't show up - I think that's proof he might exist."

And what is your take on the stories, and the people seeking these creatures?

"I also love the historical part of this, whether they're myths or stories because, like Champ the lake monster, has been around for 400 or 500 years. Not only am I interested in the fact these might exist, I'm also fascinated by the people who are fascinated by them, and dedicate their lives to trying to find these things. Most of the population says, 'Dude, you're crazy,' but they do it anyways. I think that's awesome and love that passion. Then the people with the hoaxes -- that fascinates me too."

You're in a host role on the show, but why don't you get out there and investigate?

"I wished I would've. I might have been filming 30 Rock while they were out there on location. I remember we were still in talks with agents and stuff like that, so by the time I got to hosting it, they had filmed most of it. But I think that would be awesome to go out there."

Which of these monsters from the show is your favorite?

We both live in New York, so what are our monsters?

"There's not really much. There was that movie C.H.U.D. a few years ago, then there were the mole people. New York is getting too corporate! We need to bring it back. I wrote a script years ago where Bigfoot comes to New York and I hunt him down - I might still make it someday."

You're the World Champ and a fighting master, so which of these creatures might win in a fight?

"Well, not Champ because he's only good in water. On land he's completely helpless. The Jersey Devil I'm going to go with. He has the gift of flight and it's got that Jersey attitude. Tough people in Jersey, feisty. But the Chupacabra is internationally trained, possibly. You've got Mexican fighting techniques, American fighting techniques. But I think you've got to go with the Jersey Devil."

Bobo from Finding Bigfoot shares your love of trucker hats and long hair. Is he trying to rip off your style?

"It's nice to see that I can actually be a role model - not just for young fighters and athletes - for fashion as well. I think he just idolizes me. I think the guy looks up to me a lot, and hey, you can't blame him."

Any tips for monster hunters out there?

"Don't go by yourself, go with a friend. And seriously, we really need more people investigating these creatures, and smart people - educated people - with a science background. The more research that gets out there, the better."