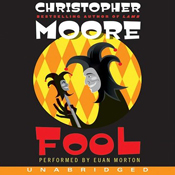 COMMENT
Author Christopher Moore is an acquired comic taste. He's irreverent, absurdist, farcical, ludicrous, deeply bawdy and often funny. Of his 10 bent novels, he has re-imagined Jesus, vampires and angels. This time it's King Lear, as told through the eyes of his cheeky and priapic jester, Pocket. Moore's plots are not the primary sell. Fool roughly follows Lear and his dysfunctional daughters but through a glass contorted. Moore's sell is his Pythonesque-meets-Austin-Powers dialogue and descriptors, delivered on these CDs with sly British sincerity and skill by Euan Morton.

Moore so understands what he's delivering that he issues a warning to listeners at the top saying, "This is a bawdy tale. Herein you will find gratuitous shagging, murder, spanking, mayhem, treason and, heretofore, unexplained heights of vulgarity and profanity." Yep, indeed it is. With lines like, "It's not proper to dry-hump the dead," you pretty much know what you're in for with Christopher Moore and his Fool.