Excitement continues to rise among both professional and amateur astronomers about Comet ISON, which on Nov. 28 of this year might become one of the brightest comets ever seen, outshining such recent dazzlers as Comet Hale-Bopp (1997) and Comet McNaught (2007).

Fortunately, Comet ISON was discovered 14 months before this perihelion passage — its closest point to the sun — while still distant and faint, thus giving observers time to plan. Another major advantage is that this fine object will be favorably placed for viewing, first in the morning sky before perihelion passage on Nov. 28, and then both in the morning and evening sky afterward.

Comet ISON was discovered photographically last Sep. 21 by Russians Vitali Nevski and Artyom Novichonok, who detected it using a 15.7-inch (0.4 meters) reflecting telescope of the International Scientific Optical Network (ISON) which is located near Kislovodsk at the northern foot of the Caucasus range in Russia.

Subsequently, pre-discovery images dating back to December 2011 were found by the Mount Lemmon Survey in Arizona and by the Panoramic Survey Telescope and Rapid Response System (PANSTARRS) in Hawaii from January 2012. ISON’s discovery was announced by the Minor Planet Center in Cambridge, Massachusetts on Sep. 24; it's officially catalogued as C/2012 S1. [Spectacular Comet Photos (Gallery)]

When first sighted, this very faint and distant comet was 625 million miles (1 billion kilometers) from Earth and 584 million miles (939 million km) from the sun, within the zodiacal constellation of Cancer (The Crab).

It was then shining at magnitude 18.8 on the scale used by astronomers to measure the brightness of sky objects (the lower the number, the brighter the object). That made the comet about 100,000 times fainter than the dimmest star that can be seen with the unaided eye.

Currently, the comet is among the stars of Gemini (The Twins) and will pass only about a half-degree south of the bright star Castor on Jan. 16. But it’s still very faint and distant at 474 million miles (762 million km) from the sun, tucked just inside the orbit of Jupiter.

According to astronomer Gareth Williams at the Smithsonian Astrophysical Observatory, improved orbital elements based on 1,000 observations from Dec. 28, 2011 through Dec. 24, 2012 continue to show that Comet ISON will pass through the perihelion point of its orbit on Nov. 28 at 3:10 p.m. Eastern time.

Just how bright the comet will become at that moment cannot yet be forecast reliably. In his 2013 Astronomical Calendar, Guy Ottewell writes: "Using what formulas we can for magnitude, we have it reaching -12.6, the brightness of the full moon!" [Gallery: Photos of 2012's 'Supermoon']

If this is correct, it might result in the view of a lifetime: A bright comet with a stubby silvery tail visible next to the sun in broad daylight, visible to the naked eye simply by screening the sun with an outstretched hand.

Ottewell imagines the comet as possibly resembling ". . . a lighted match at the sun’s edge." Only on nine other occasions dating back to the late 17th century has a comet become bright enough to be seen in the daytime.

As it approaches the sun, Comet ISON will pass just 6.5 million miles (10.5 million km) from Mars on Oct. 1, perhaps providing a worthy target for imaging by the NASA's Mars rover Curiosity.

ISON will take exactly one month to cross from the orbit of Mars to the orbit of Earth, reaching us on Nov. 1. The comet will be steadily brightening during this time from magnitude +10 to +6. It will be in the morning sky, and during the first half of the month will be keeping pace just to the north of Mars as the pair slides eastward in the sky through the stars of Leo (The Lion).

On Oct. 14 and 15, Mars and ISON will line up closely with Leo’s brightest star, the blue first-magnitude Regulus. By the end of October, the comet should be easily visible in binoculars and quite possibly even with the unaided eye.

During November, as the comet races toward its rendezvous with the sun, it should brighten dramatically as it drops lower in the dawn twilight. A tail may begin to appear at this time, perhaps becoming noticeably longer with each passing morning.

On the morning of Nov. 18, ISON — now possibly as bright as 3rd magnitude — will stand less than 1 degree from the first-magnitude star Spica in the constellation Virgo. (Your outstretched fist held at arm's length measures about 10 degrees.)

Five days later, the comet will shine perhaps as brightly as zero magnitude as it zips past the similarly bright planets Mercury and Saturn.

Finally, the comet will arrive at the sun on the Nov. 28. ISON will pass through the inner corona of the sun, experiencing temperatures of up to 2 million degrees Fahrenheit (1.1 million degrees Celsius)

Having been in a cosmic deep freeze for countless thousands of years, ISON will suddenly be subjected to unbelievable heat. Perhaps the comet’s nucleus will shatter, as sometimes happens when you pour hot tea into a cold cup.

But this is not a certainty; some sungrazers like the Great Comet of 1882 and Comet Ikeya Seki in 1965 indeed broke into several fragments and headed back out into deep space literally in shambles. Others like Comet Lovejoy in 2011 somehow emerged from out of the solar furnace still pretty much in one piece. [Photos: Comet Lovejoy's Dive Through the Sun]

A spectacle at dusk and dawn

If it does survive, Comet ISON will rapidly sweep around the sun and will then head north, becoming a spectacle both at dusk and dawn. The head of the comet will gradually fade in the days and weeks after its exceedingly close brush with the sun, but its potential daylight apparition might only serve as a prelude to an even more spectacular show.

As ISON slows its course and recedes back out into space, the comet will now be buffeted at close range by the solar wind, driving particles from the comet’s head (called the coma) out into a long stream preceding the comet.

The result? A tail, stretching perhaps for tens of millions of miles, might protrude from above the horizon like some ghostly searchlight beam. And while it will be moving away from the sun, ISON will now be approaching Earth, passing closest to us on the day after Christmas, vaulting over our planet at a distance of 39.6 million miles (63.7 million km).

By then the comet will be a circumpolar object for those in north temperate latitudes, neither rising nor setting, but instead remaining perpetually above the horizon all through the night! 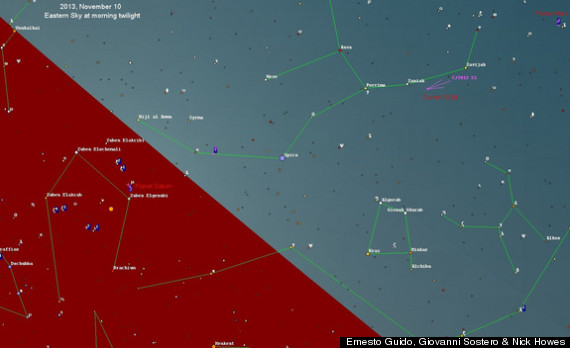 One reason for the great excitement surrounding Comet ISON is the fact that its orbit is rather similar to the Great Comet of 1680, begging the question of whether both objects are one and the same or at the very least somehow related.

A report from Albany, N.Y., indicated that the comet could be glimpsed in daylight passing above the sun. In late December of 1680, it reappeared in the western evening sky, again at magnitude +2, and displaying a long tail that resembled a narrow beam of light that stretched for at least 70 degrees — more than one-third of the way across the sky. The comet faded from naked-eye visibility by early February 1681.

But now a word of caution: Some comets are notoriously fickle actors, and occasionally the actual performance falls far short of what had been scripted.

Those of a certain age might remember Comet Kohoutek in 1973. Like ISON, it was discovered when still remarkably far from the sun, suggesting that it was a giant among comets and would become extremely brilliant. Brightness predictions ranged up to magnitude -10 — as bright as a first or last quarter moon — and some astronomers announced (as also has been the case with ISON) that Kohoutek could be "the comet of the century."

The news media took them at their word and ballyhooed the approach of a comet so bright it might be visible in broad daylight.

But Kohoutek turned out to be much fainter than the initial forecasts had indicated and, in fact, most people missed it entirely. The recriminations were nasty to say the least, with astronomers and the news media blaming each other and the public blaming both. Reporters shied away from comets thereafter, almost totally ignoring the truly spectacular Comet West in the spring of 1976.

So remember this anecdote from 40 years ago as a disclaimer.

Meanwhile, Comet ISON is still on its way and has a seemingly bright future. Here at SPACE.com, we’ll be monitoring it all through this year and will provide periodic updates on how it is developing, so stay tuned!

Editor's note: If you have an amazing of Comet ISON or any other night sky view that you'd like to share for a possible story or image gallery, send photos, comments and your name and location to managing editor Tariq Malik at spacephotos@space.com.