The science world is turning its attention to the skies as a comet closes in that may be dramatically bright beginning next month. Comet ISON (C/2012 S1), discovered a year ago, will graze past the Sun at a distance of just 1.8 million kilometers on November 28 and already has been heralded as "set to be the brightest comet anyone has ever seen" or billed as "a dud that has already fizzled out." The truth likely lies in between these extremes.

The image of Comet ISON below was shot by English amateur astronomer Damian Peach on October 11, 2013, and shows the comet's bright nucleus and tail. 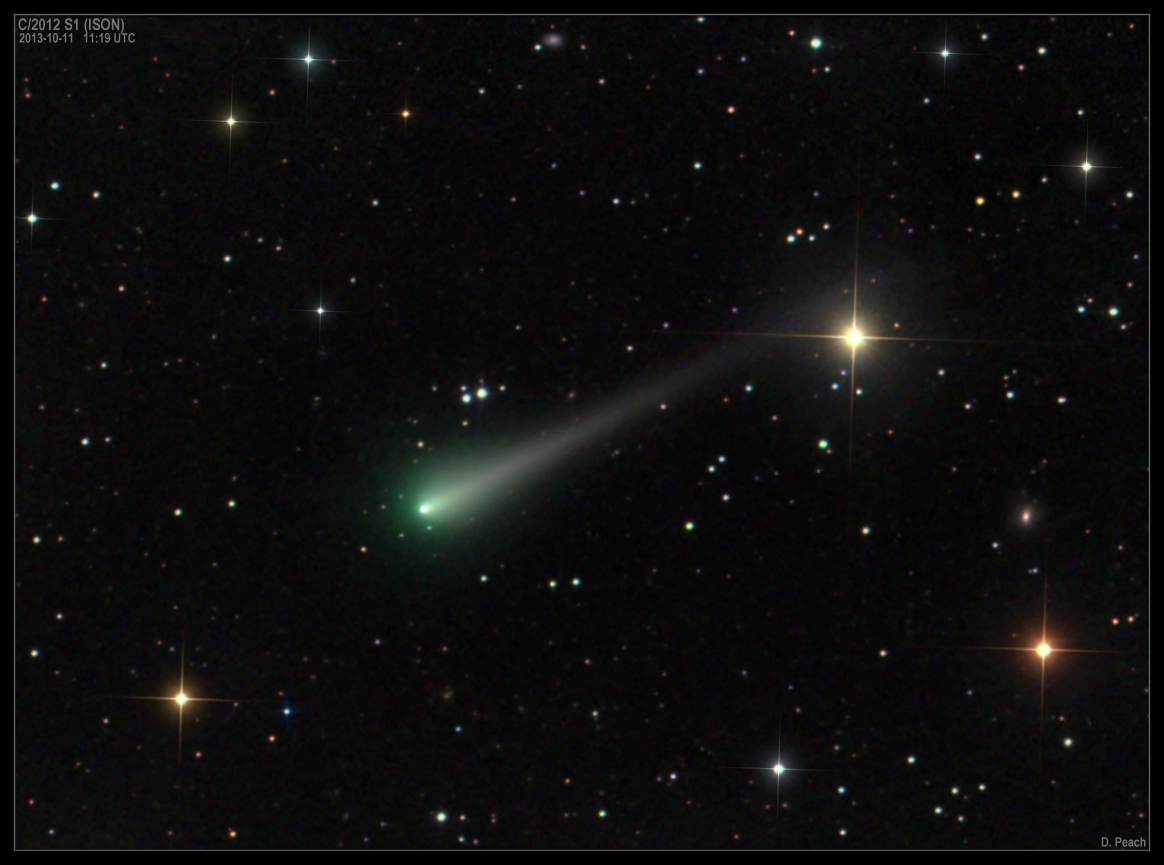 You can see a video I made for Astronomy.com about the reality of Comet ISON here.

While we wait to see how Comet ISON pans out, consider the potential role of comets to the meaning of life. Could comets, specifically, have brought life to Earth, or carried the raw materials of life onto our planet? Planetary scientists have known for many years that comets are rich in organic molecules, are coated with dark organics like polycyclic aromatic hydrocarbons (PAHs), and contain abundant CHON particles -- those primitive particles composed of the light elements carbon, hydrogen, oxygen, and nitrogen. The laundry list of molecules observed in comets is long, and includes numerous carbon-containing compounds. If panspermia didn't generate life throughout the cosmos, then perhaps microbial life formed extra-terrestrially in rare cases and was delivered here by comets. Or perhaps comets deposited the raw materials, the organics that led to higher order organics, from which life arose.

In 2009 astronomers took a significant step in answering this question. A team of NASA researchers announced the discovery of glycine, an amino acid, in samples recovered from the Stardust spacecraft from Comet 81P/Wild 2, which the spacecraft encountered in 2004. The announcement was exciting because glycine, as one of the amino acids, is a fundamental building block of life. The fact that it exists in a comet -- indeed, the only comet astronomers have returned a sample of to Earth -- is compelling evidence that amino acids are commonplace in the icy reservoirs of the outer solar system, and were abundant in the solar system's early days.

Amino acids are critically important biological compounds made of groups of amines (NH2) and carboxylic acid (COOH). The key elements of amino acids are carbon, hydrogen, oxygen, and nitrogen, the same elements existing in large quantities in comets as those primitive CHON particles. Some 500 amino acids are known; they are biologically critical because they are the basic building blocks (monamers) that make up proteins. It's quite amazing to realize one of the key building blocks of life exists in a comet.

Glycine itself has the chemical formula NH2CH2COOH, and is the smallest of the 20 amino acids commonly found in proteins. It exists as a colorless, sweet-tasting crystalline solid, and was discovered in 1820 when French chemist Henri Braconnot (1780-1855) boiled gelatin along with sulfuric acid. Commercially, it's used as a sweetener and as a buffering agent in antacids, antiperspirants, cosmetics, and toiletries. It's also often added to pet foods and animal feed. Glycine is also used commercially in the production of rubber sponges, fertilizers, and metal complexants (substances that prevent precipitation of materials in solutions).

Glycine is not essential in human diets because the body biosynthesizes it using the amino acid serine, which is in turn synthesized from 3-Phosphoglyceric acid. Once it exists within the body, glycine molecules are used for a variety of functions, primarily to build proteins. It's also an important neurotransmitter in the spinal cord, brainstem, and retina. It's an important molecule for life.

The NASA team's discovery was exciting for those studying organic molecules in space because it supported the idea that some of life's components existed in space and were delivered by comets and asteroids to early Earth. Although amino acids like glycine could easily have also formed in the primordial soup on our planet, it was certainly convenient in terms of getting the stuff of life going to have them sent by special delivery.

On announcing their discovery in August 2009, scientists beamed with pride over the notion that it also helps support the idea that life is commonplace in the cosmos, which it certainly does. With the building blocks of proteins whizzing about solar systems here and there, slamming into planets, seeding life on many worlds is probable. All the worlds would need would be the right amounts of energy, the correct range of temperatures, and a solvent like water in order to start the magical process of making proteins, RNA, and DNA. And then the story of life begins anew, perhaps on countless worlds in the universe.