Can comets hit Earth? As a scientist who helped launch vehicles into Space, I wondered the answer to this question too. Recently the comet named Siding Spring nearly collided with our neighboring planet Mars. To give a rough estimate of its close proximity, it was 1/3 the distance of the Earth to the Moon. NASA scientist at the Jet Propulsion Laboratory stated that the comet came close to the Mars observation equipment -- Mars Odyssey, Mars Reconnaissance Orbiter and the Mars Atmosphere and Volatile Evolution (MAVEN) - but fortunately missed it. Had the comet been any closer, the rock-dust-gas debris, flying at 126,000 miles per hour at 87,000 miles above Mars' surface, could have destroyed the equipment like a bomb. But can a similar event happen on earth? 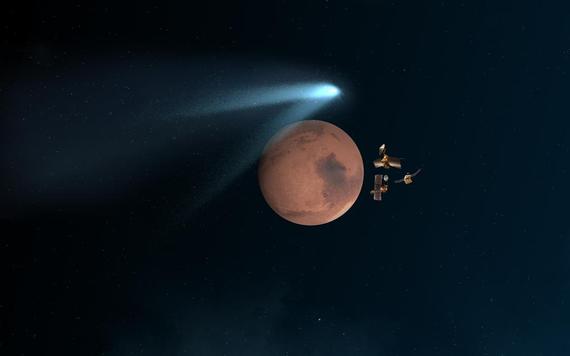 The answer to the initial question is, "Yes." But don't worry. History shows the answer. Although meteorites, asteroids and comets are all flying rocks, comets and asteroids pose different types of threats due to their trajectory patterns. To differentiate, meteorites are interplanetary debris that fall through the atmosphere and actually land on Earth. Asteroids are generally larger chunks of rock that come from the asteroid belt located between the orbits of Mars and Jupiter. Comets are much like asteroids, but they may have more ice and methane compounds. And some comets grow tails when approaching the sun. However, most news reports interchange these names frequently. 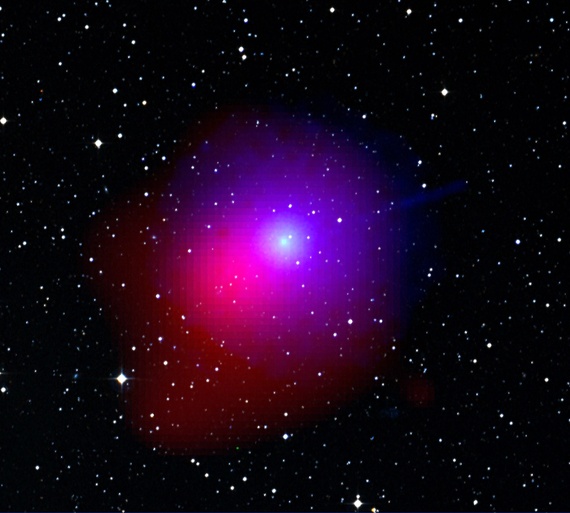 With that said, some "comets" have reached Earth's atmosphere previously. One of the earliest indications of this phenomenon happened in Egypt. In The National Geographic article "First Evidence Found of a Comet Strike on Earth," a comet was suspected to directly enter Earth's atmosphere about 28 million years ago. King Tut's items showed physical matter from a comet's entrance. The impact caused exploding over Egypt, creating a 3600°F (2000°C) blast wave that covered the desert below. The article continues, "The fiery shock wave melted the sand, forming copious amounts of yellow silica glass scattered over 2,300 square miles (6,000 square kilometers) of the Sahara."

Some distant comets can still be seen today. Consider Halley's Comet. Over the next few days, Earth moves through a stream of debris left behind by this famous comet. The comet is scheduled to produce dust that will burn up in the Earth's atmosphere, igniting shooting stars visible by the naked eye. Documented as early as 240 BC, Halley's Comet was officially discovered and named by Edmond Halley in 1705. 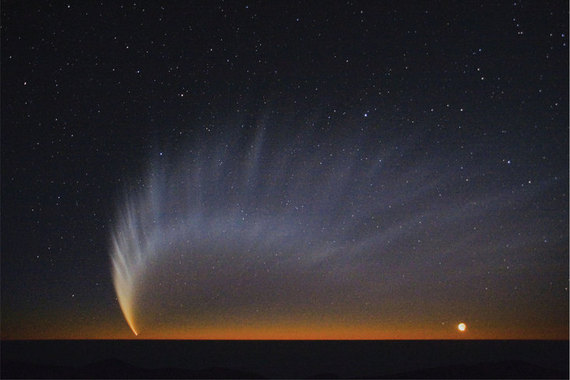 Comet McNaught, seen at sunset from Chile and overlooking the Pacific Ocean. Photo courtesy of NASA/JPL-Caltech.

Currently though, we humans are more concerned about meteorites. In 2013, many of us remember the asteroid that entered Earth's atmosphere and exploded over Chelyabinsk, Russia. The 65-foot wide asteroid over Chelyabinsk caused explosion-like waves, damaging buildings, shattering windows and leaving more than 1,000 people injured by flying debris. The event was video-captured on many smart phones. According to the Discovery News article "Russian Meteor: Chelyabinsk Asteroid Had Violet Past," it was suggested that the meteor had a massive run-in with another much larger object about 500 feet in diameter years before it hit the earth. 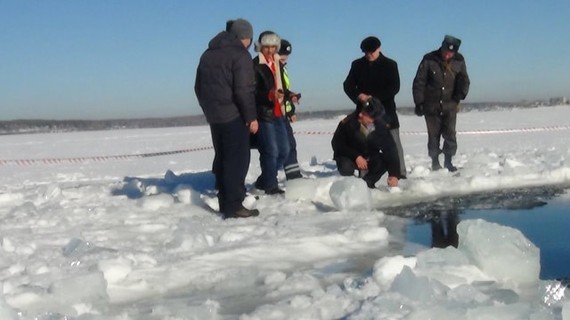 As a scientist, I, Olympia LePoint, understand major ripple effects would occur if a super meteorite were to hit the earth. Massive global damage could be the result. Many scientists theorize that if a large-enough meteorite were to actually hit the earth, the gas and dust debris could raise into the higher atmosphere blocking sun rays. This impact would be equivalent to six, large gaseous volcanoes erupting simultaneously around the world, within a six-month time span. Further, human life could possibly become jeopardized or extinct. But the chances of this scenario are extremely slim in our lifetime. And this dramatic sequence is more suitable for a great science fiction movie, with a tasty bucket of popcorn.

In the meantime, my advice remains the same. Look at the night sky, and be thankful for our human existence. For each day is a blessing, meant to be lived to the fullest. Until next time, find me on facebook and share your thoughts. www.facebook.com/OlympiaLePoint