Nearly all the usual suspects that predict presidential elections point to a rough road ahead for Obama: His job approval rating, which has sunk to the low 40's; an economy with anemic growth, an unemployment rate stuck at 9 percent, and poor consumer confidence; horse-race polls in which Obama is struggling to beat a generic Republican and some flesh-and-blood opponents. Add to that a dispirited Democratic base plus a cocky Republican Party, and it would be easy to write off Obama as a one-term president. Yet there is one comfort that Obama can draw on right now: History is on his side. What kind of history?

Over the course of two centuries, American presidential elections have exhibited a distinct cycle. This is not the pattern associated with long-term partisan realignments that may last 30 years or so. It is a more short-term cycle that has escaped notice. Not as regular as the tides, it behaves more like sunspots and hurricanes. As an example, consider how the White House party has fared in successive elections during the last half century. 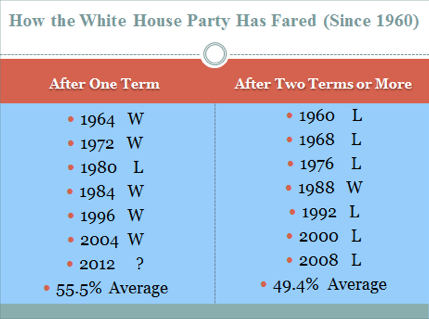 But what about George H.W. Bush in 1992? And Gerald Ford in 1976? Both went down to defeat after having served one (or even less than one) term as president. That is certainly true, but the prediction is about the presidential party. By 1992, the Republicans, with Reagan and Bush, had held the White House for three terms; by 1976, they had done so with Nixon and Ford for two terms. Neither Ford nor Bush (elder) got into office by sweeping out the other party. They did so more or less as designated successors of presidents with a considerable record. For better or worse, they were measured by the legacy of their predecessors, whom they served as vice presidents, rather than as genuine first-term presidents.

In contrast, a president who enters the White House by defeating the candidate of the incumbent party -- perhaps the sitting president himself -- starts out with a pledge of change: from Kennedy's "New Frontier" in 1960, through Reaganomics in 1980, to Obama's "Hope and Change" in 2008. The electorate has loudly registered the demand, "It's Time for a Change." But change will take time to be implemented. At such moments in history, one may suspect, the public is willing to show some patience with the efforts of the new administration to work its magic. But when two terms are up the public may no longer be inclined to give the administration the benefit of the doubt. By then, of course, the two-term limit prevents a sitting president from running for another term, making the odds of retaining the White House even longer for the presidential party.

Whatever the explanation, the pattern illustrated for the last 50 years can be spotted in presidential elections all the way back to 1828, when popular voting took hold across the United States.

So it is not just recent history (since 1960), but electoral history going back to 1828 that augurs well for Obama in 2012. Having ousted the Republicans from the White House in 2008, he has an expected lease on the property for two terms, while leaving his party with a 50-50 chance of retaining it for another term.

What is more, the electoral cycle lets us make a vote forecast for the 2012 presidential election, using the following equation1:

The resulting forecast gives Obama 51.8 percent of the two-party vote in 2012. It is not a landslide as some first-term presidents have scored: Johnson in 1964, Nixon in 1972, and Reagan in 1984. It is more a narrow victory of the kind Bush achieved in 2004. In view of the error that attends any model estimates, what are the chances that Obama will win in 2012, given the forecast of 51.8? The answer is two in three. Yes, history is on Obama's side, but with less conviction than in the case of some other first-term presidents.

1 This type of model was proposed by G. U. Yule to mimic the periodic, albeit irregular, fluctuations of sunspot observations over a span of 175 years. See Yule, G.U. (1971). On a method of investigating periodicities in disturbed series with special reference to Wolfer's sunspot numbers. In A. Stuart and M. Kendall (Ed.), Statistical papers of George Udny Yule (pp. 389-420). New York: Hafner Press. (originally published in 1927)