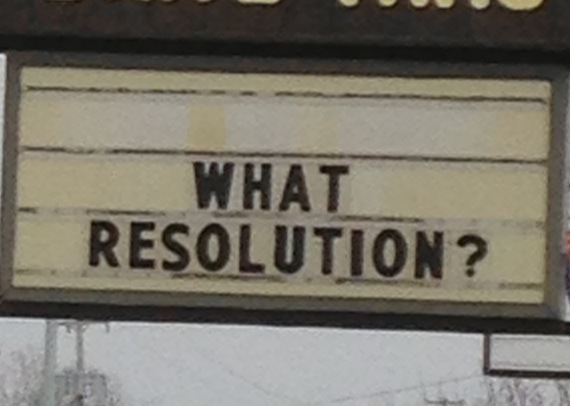 "You know what the problem is with making any sort of effort to better ourselves?"

"It's just a set up for failure," my friend moaned. "I mean, really," she continued, licking some whipped cream off the top of her mocha. "What's the point of a New Year's Resolution aside from reminding us come February that we're completely incapable of changing ourselves?"

I had to agree with her, even though the optimist in me wanted to offer a more encouraging perspective. Maybe the situation wasn't as bleak as she had depicted to be, but I had to admit that the bleakness was worthy of consideration.

Part of why I related to her was because I had recently read and acted on Kondo's best-selling book, The Life-Changing Magic of Tidying Up. It inspired me to tackle my house with the sort of vigor that I thought might turn everything around in a weekend. Instead, it merely led to me waving the white flag of surrender when it comes to home organization. As I had mentioned to another friend, soon after the new year: "Attempting to organize my mudroom was possibly the most discouraging thing I've ever done. Seriously, if someone walked into the chaos of that room they'd never believe I spent multiple days clawing out and disposing of hundred of objects."

"Wait a minute," my friend remarked, "why were you starting with your mudroom? You broke all her rules: clothes first; go by category, not by room."

"Yes, but those rules don't work for me," I rationally explained, "because our clothes are not a problem, and it would take me a year to come up with categories for every strange item in my mudroom: un-inflated water balloons, Chinese herbs, ear muffs, crayons, jump ropes, glitter glue, vacuum accessories, and bloody plastic appendages used in my son's horror films (would upper-body limbs and lower-body limbs be categorized separately?)

The point is that before I was done with that one room, I had given up on the entire project. "Maybe we'll just live on in a messy, unorganized home until we move out or die off and there can be an estate sale."

My defeat reminds me of a story published in The Onion back in 2005: "Search For Self Called Off After 38 Years." Reading the first few sentences still makes me laugh.

"CHICAGO-- The longtime search for self conducted by area man Andrew Speth was called off this week, the 38-year old said Monday. 'I always thought if I kept searching and exploring, I'd discover who I truly was . . . Well, I looked deep into the innermost recesses of my soul, I plumbed the depths of my subconscious, and you know what I found? An empty, windowless room the size of an aircraft hangar. From now on, if anybody needs me, I'll be sprawled out on this couch drinking black-cherry soda and watching Law & Order like everybody else."

In a similar vein, Pema Chodron describes a cartoon in her audio recording entitled, True Medicine: "There's this man kneeling by his bed, looking upward, with his hands grasped in prayer. He's saying 'I asked you as nicely as I could to make me a better person, but apparently you couldn't be bothered.' "

Even if our 2016 resolutions are moving along somewhat successfully, probably most of us can relate to these feelings of discouragement regarding our well-intended attempts to improve the state of our spiritual lives, our daily habits, or our homes. Sometimes, we might find ourselves having no one to blame but ourselves, while at other times we might be able to point to others or the trickery of the world as culprits of our downfall ("if only I didn't have the stress of my boss/child/partner," "if only the gym hadn't changed its hours!"). I felt this trickery last year in discovering I had a food sensitivity to quinoa. I've been angry at this grain ever since, even cursing it last month as I drove by it on a billboard for Panera's new Mediterranean salad. I always felt mildly guilty when eating gluten or dairy, assuming if I ever felt stiff or achy they were the causes. But if there's any food on the planet currently being heralded as the thing to eat, it's this gluten-free, protein-rich grain. Being told I was allergic to it was the sort of thing that made me want to say-- just as my friend had: "Yes, a ton please! I'll take a ton of whipped cream on my mocha!"

As we kept chatting that day, however, we did land on some silver linings and encouragements around resolutions.

One thought worth considering--maybe we should all throw in some resolutions that are easily attainable or actually pleasurable to achieve. For example, I decided that a focus for the new year should be to watch more television. By that, I mean some of the really good shows that I hear people talking about and have no idea what they're referring to because I watched maybe, at most, 2 hours of television a month last year. The good news with a resolution like this is you can feel good about it whether or not you've accomplished it--either way, you can describe the situation in your favor.

I think we also need to give ourselves credit, as a species, for our willingness, year after year, to return to the tradition of New Year's Resolutions even when our track record for keeping them is not very impressive. I think this sort of determination demonstrates our collective spirit of willingness to try, along with our unrelenting hopefulness that new beginnings can occur. Even if we're not perfect in implementing these new beginnings, we might find comfort in thinking about how much worse off we'd be if we never tried at all. I like to remind myself of this on the many days when I don't have nearly the amount of time I'd like for exercise. A 10-minute walk might not be the same as a 30-minute run, but I recognize that if I hadn't tried to hold a half-hour to run, I wouldn't even be taking a brief walk. There are even moments, I have to admit, when it's been easier to locate something in my not-ideal-but-better-than-it-was mudroom

There may be gifts to be found in the intersection between our goals and desires and our discipline and imperfection--all the ways we simultaneously strive for betterment and long for momentary pleasure. Maybe the tension we experience among these things is an inherent part of inhabiting a human life. Maybe, too, when we remember to come up for air from time to time--venting and chuckling a bit at our predicament--we're better able to endure life's absurdities and annoyances, along with taking in all the good stuff offered along the way.

Plus, if it's worth any consolation--there's always February. Maybe January was just a warm-up . . . :)

New Year's Resolutions Self Improvement Stress Management Humor
This Blogger's Books and Other Items from...

Full Cup, Thirsty Spirit: Nourishing the Soul When Life's Just Too Much
by Karen Horneffer-Ginter