My 7-year-old son and I had a fun but tiring summer last year, a three-month push and pull between his desire to grow up and my desire to keep him safe and protected and basically locked up in our house: no heading outside barefoot, no playing in the front yard alone, no wandering into the tick-infested woods, no swimming in the ocean just yet. You get the idea: the kind of summer memories only a helicopter mom can provide.

I vowed to make this summer a summer of more freedom, for both of us. So, I enlisted the help of Lenore Skenazy, author of Free-Range Kids: How to Raise Safe, Self-Reliant Children (Without Going Nuts with Worry) and founder of the Free-Range Kids movement, which is essentially the polar opposite of helicopter parenting.

Lenore volunteered to act as a kind of risk-coach, breaking me of my hovering ways with coaching and a series of "risk challenges" for my son. We would start out with small risks and then gradually build to riskier challenges. Of course, Lenore didn't see my son's requests for freedom as risks, just a normal part of the development of a young boy. I chronicled our adventure -- my worry, Lenore's coaching and my son William's challenges -- in an article that's coming out in the fall issue of Real Simple Family.

We began by creating a list of William's Top 5 Most Desired Risks, which led to 10 and then to the inevitable, "Mom, let's do 100!" Here's a sampling (with photos below):

1. Allow William to Use a Hammer 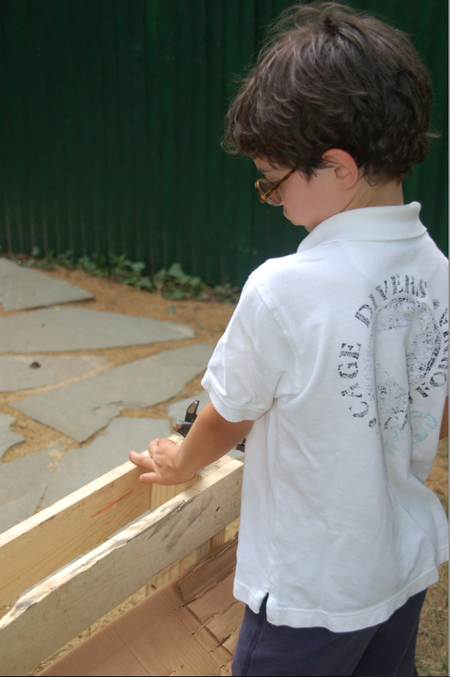 William took that hammer without any hesitation, held the nail like a pro and proceeded to hammer his.. finger. I bit my lip. Hammering the nail, then his finger, then the nail -- he finally drove it through the piece of wood and then asked for another nail. You could say he nailed this challenge.

2. Allow William to Capture Bees and Keep Them As Pets (!) 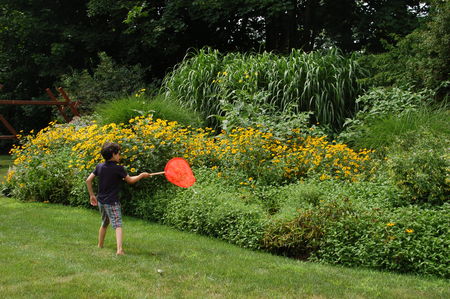 William took one of our butterfly nets and went chasing after the bees in our backyard. I didn't say a word. He caught one, tried to bring it home to contain it, and then suddenly realized this might not be the best idea. He let the angry bee go and ran as fast as he could back to the house. I'll admit I was relieved to see his good judgment prevail.

3. Allow William and his sister Caroline to play in the front yard, alone. 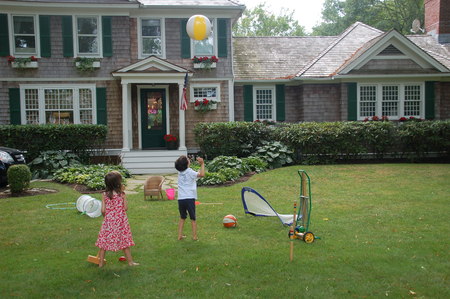 I live on a safe but busy village street. When Lenore arrived to help, I started having second thoughts. She gently nudged me into the back of the house and opened the front door for two very excited children. She coached me over coffee inside, while William and 6-year-old Caroline happily played outside for an hour (with every toy we owned splayed out on the front lawn.) We all survived. They loved the freedom, just like I did when I was their age, I thought.

4. Allow William to cook his breakfast. 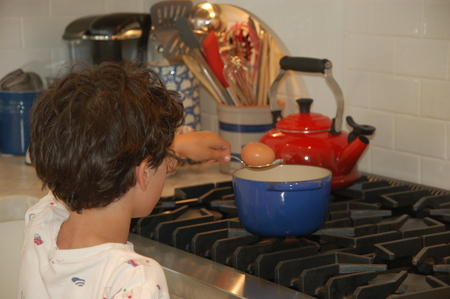 William knew enough to take off his robe so that it wouldn't catch a flame. He gently put the eggs in the pot, covered them with water and turned on the gas. After they boiled, he carefully took the eggs out of the hot water with a spoon... and they never tasted better. I felt a pang as I remembered the thrill of mastering something new as a child. I wondered how many of these thrills he would miss if I continued my hovering ways...

With Lenore's help, instead of holding my breath through these exercises, I actually felt a surprising amount of relief. For William, his eyes grew bigger with each new taste of freedom. Not only was he able to take the "risks" he so longed to take, more than that, he saw that his mother believed in him, that she trusted his judgment and that he, in turn, could trust himself. When I'm not around, William will have to figure out for himself how to navigate risk in the years ahead. For now, we're having fun making our way through his ever-growing "risk-list."

And as for my helicoptering, I can say I've safely landed.

To read more about Lenore's advice and to see more of our risk-challenges, check out my Real Simple Family article on stands August 9th.

More:
Parentshelicopter parentinghelicopter parentparents-moms
Newsletter Sign Up
Raise the kind of person you'd like to know
Subscribe to our parenting newsletter.
Successfully Subscribed!
Realness delivered to your inbox