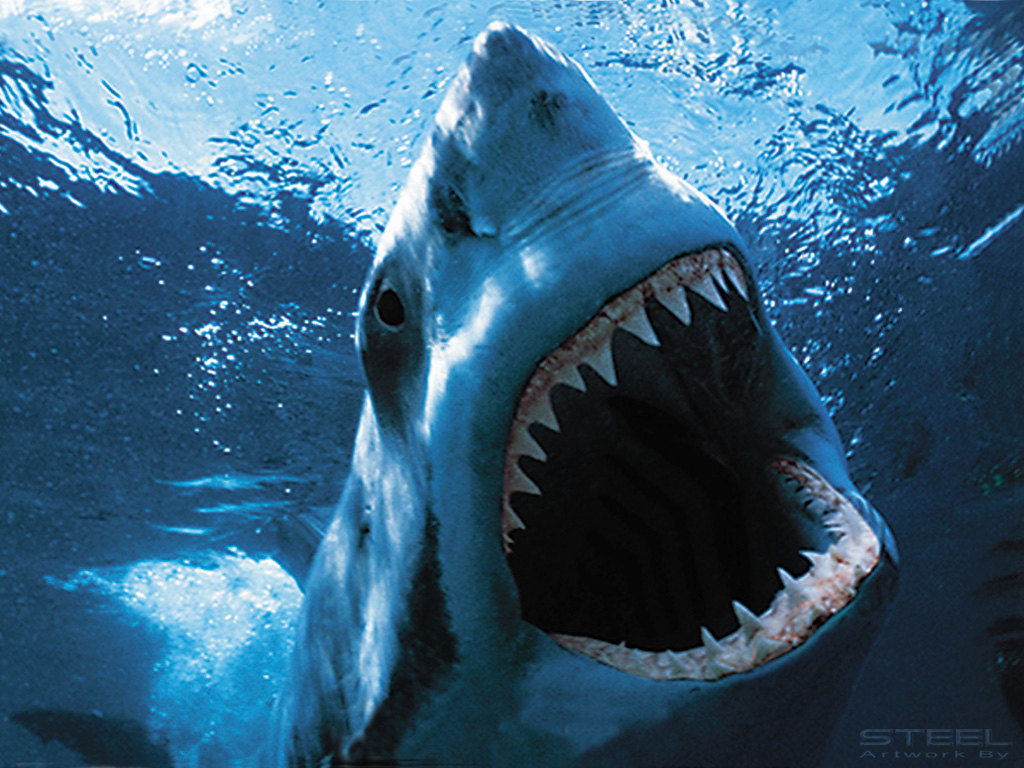 Now that Shark Week is over, our beloved 7-day oceanic feeding frenzy courtesy of the Discovery Channel, many of us are left with a crippling fear of these swimming predators. The images of razor teeth and dismembered surfers haunt our psyches long after this highest-rated series ends, pure Freudenschade the only thing that keeps us from changing the channel.

How do you know your cage has been rattled by Shark Week? There are telltale signs. Do you hear the theme from "Jaws" every time you're in your pool? Are you even scared to get in the bathtub? Have you been avoiding your favorite sushi restaurant for fear of instigating sashimi's big brother? These are all common signs of Post Traumatic Shark Disorder, but there is hope. Once you know the facts behind the fear of shark attacks, it will be easier to feel (semi) safe in the water once again. 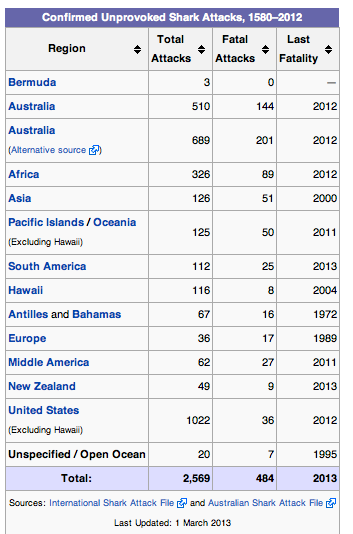 How many people are attacked by sharks?

Let's get right down to it, how many people get attacked? Looking at comprehensive data collected since 1580, over 430 years, we can track the instances of shark attacks per country. The United States leads the way with 1,022 attacks, then Australia where 689 attacks have occurred, followed by Africa with 326 attacks. It's interesting to note that they tally Hawaii's numbers separately because it's not in the continental U.S., and they've had an alarming 116 shark attacks.

How many shark attacks are fatal?

It may seem like almost every person who is attacked by a shark perishes, but quite the opposite is true. Even though the U.S. has the highest shark attack numbers, only 36 fatalities are on record. The highest rate of fatalities is in Australia where they've had 201 shark attack deaths, roughly 1 in 3 who are bitten (that higher percentage might be attributed to the size and type of shark prevalent in their waters, as well as the remoteness of beaches for suffers and divers.)

Next comes Africa, with 326 attacks and 89 fatalities. Hawaii has had only 8 shark fatalities on record. 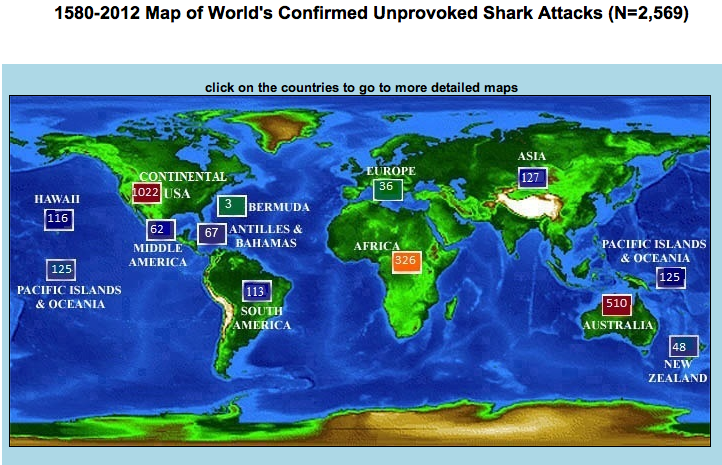 Where is the most dangerous place on earth for shark attacks?

Western Australia seems to be the most dangerous place on earth for fatal shark attacks, and New Smyrna Beach, Florida has the highest number of shark attacks of any one location, making it the unofficial shark attack capital of the world. It's estimated that every person who swims there is within 10 feet of a shark at some point!

What are the odds you'll be attacked by a shark?

That's incredibly slim considering that 75 million U.S. people visit beaches and swim in the ocean every year, but there have been only 26 fatalities over the last 40+ years.

In fact, you're more likely to die from:

Who gets bitten by sharks?

Most shark attacks occur less than 100 feet from the shore, mainly around popular beaches in North America (especially Florida and Hawaii), Australia, and South Africa.

September is the month with the most shark attacks in Florida.

What kinds of sharks are dangerous?

There are 480 breeds of sharks in the world but only 3 are considered dangerous to humans; the Great White, Tiger shark and Bull shark.

Dangerous breeds of sharks are big, fast, and vicious - nature's efficient killing machines. The average human swimming in the ocean is around 165 lbs and swims no more than 5 mph (unless you're Michael Phelps.) While a Great White is up to 5,000 pounds and can swim at 25 mph, a Tiger shark 1,400 pounds and up to 20 mph, and a Bull Shark up to 700 lbs and 11 mph.

How big are their teeth?

Even the deadliest sharks, Great Whites, have relatively small teeth for such large predators, about 36 mm, or 1.43 inches. The largest living shark, the Whale shark (which is not dangerous to humans) has tiny teeth.

Their teeth may not be big, but they are razor sharp and their jaws exert an incredible amount of force. The largest great whites have a bite force of up to 1.8 tons. By comparison, a large African lion can produce around 560 kg of bite force and a human approximately 80 kg - making the great white's bite more than 20 times harder than that of a human.

Sharks prefer to kill their prey by biting into them and then pulling their kill side to side. This saw-like motion rips their victim open, causing it to bleed to death.

Where on the body do shark bites occur?

When attacks occur victims are 32 percent likely to be bitten in the lower legs, 25 percent upper legs, 19% lower torso, 10 percent upper torso, 8 percent arms, and only 6 percent in the head. 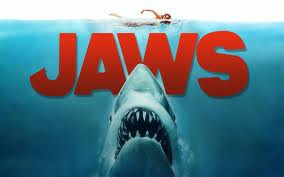 How can you reduce the risk of being attacked by a shark?

What to do if a shark attacks:

If you see a shark, remain calm and swim to shore as fast as possible, trying not to splash too much. However, you can't play dead with sharks, so if they attack fight them off as aggressively and violently as possible. Attempt to jam the shark on the nose with any object or claw at it's gills or eyes, a shark's most sensitive areas.

If you are bitten:

If you are bitten, getting out of the water as fast as possible increases your chances of survival. Signal to others to get out of the water, too, and for someone to come help you onto the shore. Immediately find someone with a cell phone to call 911 and try to locate a lifeguard or first aid kit. Wrap the wound with clean towels, t-shirts, or any other fabric, and apply pressure to help stem the bleeding.

But most of all, pray.

***
Although these fun facts are less than comforting, keep in mind that far more people are killed by lightning strikes every year than shark attacks. Or you can look at it from the shark's perspective: for every human killed by a shark, human beings kill approximately 2,000,000 sharks. I wonder if they are floating around, talking about watching the carnage on "Human Week?"

To read about deep-ocean swimming in Costa Rica amidst fear of sharks check out South of Normal.

"I swam out past the breaks, past the surfers in the lineup, and well past the fishing boats. I shared the Pacific with countless life forms but I thought about sharks. It wasn't a matter of IF they were there, but HOW CLOSE they were.

Big White, the Landlord, Man in the Gray Suit, Greg Norman, the White Death, Mac the Knife. Sharks. The thought tensed me with fear, bringing fatigue to my shoulders and neck as I treaded water. Every time I swam out into the ocean I voluntarily inserted myself into the food chain--and unnervingly low on the ranking."