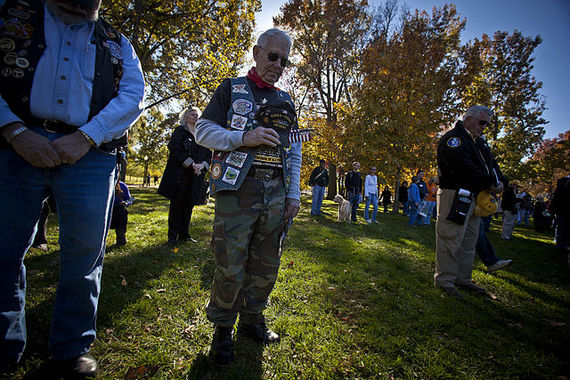 Korean and Vietnam War veteran prays during ceremonies at the Vietnam Veterans Memorial.

Ralph grew up in an abusive household, but the child with learning disabilities found a home in the Baptist church in his rural town.

He believed that "no matter how much his parents beat him, and no matter how much his teachers and peers in school mocked and mistreated him, as long as he maintained a prayerful relationship with God and did his best to do what was right in life, in the long run everything would go well."

That attitude served him well as he volunteered for the Marine Corps and rose to a leadership role in combat in Vietnam. He required his men to gather for prayer before missions, and his unit had a low casualty rate.

Until the night his base was overrun by Viet Cong troops, and over half of those serving in his unit were killed. He stopped praying and did not return to church.

His goal? To restore friendship with God.

The case study from new research on religion and veterans reveals the potential powerful impact faith can have on the lives of service members.

The good news is many religious groups are taking up the challenge.

The 2012 National Congregations Survey revealed more than a quarter of U.S. congregations have programs to support veterans.

In addition, congregations serving veterans are most likely to be located in places where the need for support is greatest, such as counties where there are higher proportions of veterans and rural and high-poverty areas, according to a separate study.

But what this developing body of research also reveals are a lot of missed opportunities to provide spiritual counseling.

And just how much the right type of spiritual support matters.

Veterans who are able to find a resource in faith in a loving God who cares for them appear to be better able to work through the stresses of combat.

Those who continue to struggle with images of a judgmental God who is responsible for senseless suffering are more likely to take their own lives, research indicates.

There are several reasons religion may be a critical resource for many veterans.

Religious communities can provide important sources of social support. Personal faith can provide solace and a sense of hope to men and women who endure constant stress and may have experienced traumatic events in conflicts in places such as Iraq and Afghanistan, researchers note.

In addition, faith communities may provide a safe entry point for addressing mental health issues. The military can promote a culture of toughness and self-reliance where seeking medical help for illnesses such as depression may be looked down upon as a sign of weakness. In contrast, seeking spiritual advice from a clergy member is much more likely to be viewed in positive terms, researchers have found.

Several studies support both the positive role of faith, and the value of spiritual intervention when veterans adopt negative coping skills such as denial or believing they have been forsaken by God.

• A study of homeless veterans in both secular and faith-oriented residential care programs based found that "greater religious participation was associated with greater improvement in housing, mental health, substance abuse, and quality of life."
• In a study of veterans of the Balkan wars, those scoring higher on a scale of religious moral beliefs were likely to have lower levels of depression. Those beliefs may help protect "war veterans' mental health stability after surviving multiple war traumas," researchers said.
• Returning service members who struggle with feelings of being abandoned or punished by God, however, were likelier to find themselves at higher risk for suicide, a study of U.S. veterans of Iraq and Afghanistan indicated.

There is a gulf between the number of veterans who believe they may benefit from spiritual counseling, and the veterans receiving it.

In one study of 761 VA patients with probable major depression, about half said they would be open to receiving spiritual counseling from someone such as a clergy member of devotional leader for help with emotional problems.

Yet just 12 percent received such care. Ten percent of ailing veterans reported that their VA providers had recently asked them about spiritual support.

In general, the research finds, there is a need to include spiritual counseling where appropriate into health care teams, and to better educate both clergy and medical personnel on the emotional needs of returning service members.

Listening in a supportive manner may also be one of the best ways people in the pews can care for returning service members.

What veterans experiencing depression or post-traumatic stress disorder do not need is judgment - remarks such as good Christians do not get angry at God or that mental illness is a sign of a lack of faith are particularly unhelpful, research indicates.

Pope Francis early in his papacy rebuked such attitudes, calling the church a field hospital.

"The ministers of the Gospel must be people who can warm the hearts of the people, who walk through the dark night with them, who know how to dialogue and to descend themselves into their people's night, into the darkness, but without getting lost," Francis said.

Certainly it seems that spiritual counseling helped Ralph, the Vietnam veteran seeking to renew his relationship with God.

Researchers reported in the journal of Spirituality in Clinical Practice that by the end of the veteran's group sessions he had experienced a "change in the dark hopelessness and constant anxiety that had been his companion since that fateful day in Vietnam."

He was committed to restoring his relationship with God "and potentially loving others." He even had started looking for a faith community to provide social support and a place to worship. Several weeks later, a therapist reported Ralph was showing signs of improvement and working to reconnect with family and others in his community.

Ralph, and many other veterans like him, still face a long road ahead, however.

They have walked through the valley of the shadow of death described in Psalm 23.

It is time for others to walk with them.