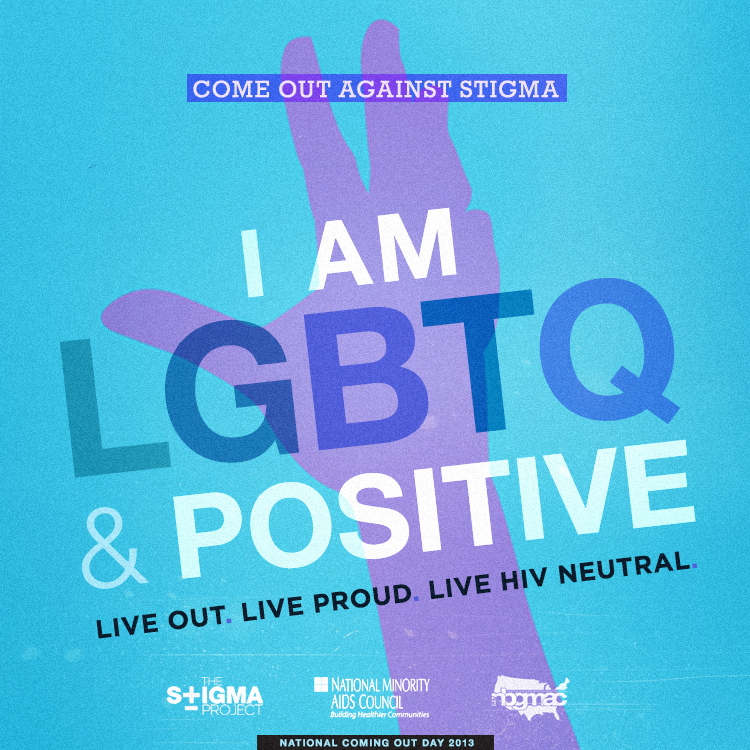 One of the most common emotions that people experience upon learning that they are HIV-positive is shame. It's a destructive and paralyzing emotion that serves no purpose with HIV. Speaking out is one of the best antidotes to shame. When people speak openly and unashamedly about their HIV status, we can find authenticity and empowerment, and we can help foster a stronger and healthier community.

This National Coming Out Day, The National Minority AIDS Council, The National Black Gay Men's Advocacy Coalition, and The Stigma Project have teamed up on a new social media campaign, "Come Out Against Stigma." This is an opportunity for queer people to come out, not just about their sexuality but also about their HIV status.

To come out about one's HIV status can be a risky prospect. We live in a world of stigma and intolerance, and all too often, coming out is met with anger, castigation, and possibly even violence. But people still come out. That's what we do. We come out.

Coming out is a constant process. Sometimes it's subtle, and other times it's explicit. We come out about our gender, our ethnicity, our nationality, or our sexuality. It's part of the human experience. We yearn to affirmatively declare our ever-evolving identities. To choose to come out as HIV-positive is no different.

Coming out about HIV is a very personal expression that can have profound political, legal, and cultural consequences. In an ideal world, stigma, shame, and homophobia wouldn't exist, and coming out about HIV wouldn't raise much attention. But we live in a messy, imperfect world, and we'll never make it completely safe enough for everyone to come out. But ironically, the best way to combat this risk is by coming out. It's the classic case of strength in numbers.

The history of coming out in the LGBT community has demonstrated that when people know LGBT individuals -- when they see us as actual flesh-and-blood human beings -- they are less inclined to discriminate and more willing to respect our humanity.

What does the general public really understand about HIV-positive people? In the early years of the epidemic, we saw ordinary people and activists, actors and athletes, step forward about their HIV. They transformed how people thought about the disease. But in the past 20 years we've lost a considerable amount of momentum around coming out. Now we have the opportunity to share our unique stories beyond the sensational and maudlin headlines, so that others can fully appreciate the diversity of our experiences.

Sometimes coming out about HIV can simply mean making it an incidental part of one's life. No more secrets, evasions, or strategic use of language. Being out can mean talking openly and honestly about the experience of living with HIV -- openly taking your meds with meals, discussing the challenges of a serodiscordant relationship, gabbing about dating with HIV -- just as casually as others talk about their diet plans, their marriages, or the struggles of raising a teenager.

I am not naïve about the risks of coming out. When I came out as HIV-positive, I encountered a hostile community that called me "stupid," "reckless," and "irresponsible." When I came out to my family, it meant the rupture of an already fragile relationship with my father. But I chose to affirmatively declare my HIV-positive status so that I could live my life open as a young gay man with HIV and, in the process, combat the stigma in our community.

It's very empowering to come forward and say, "I am not ashamed or embarrassed. This is who I am, no excuses or apologies." But it's not easy. As we move through life, the best we can do is strategically minimize risk. We do it all the time -- when we have sex, drive down the freeway, or decide to hold our boyfriend's hand in public. It's one thing to take a risk, and it's something entirely different to claim a risk as your own. To be able to determine the course of your life, including the risks and rewards, is something we strive for.

Our history is full of ordinary people confronting considerable risks in hopes of making things better for themselves and others, from Seneca Falls to Selma to Stonewall, from the striking farm worker in California to the young DREAMer in Arizona to the trans youth running for homecoming queen in a small Southern town.

It's the ability to stand up for social justice in the face of such odds that makes stories of change so compelling. These declarative acts can have a profound impact on politics and culture and the lives of our community members. Now we have the opportunity to do the same thing around HIV.

We can demonstrate that speaking openly about HIV, whether you are negative or positive, can reduce stigma and create a healthier, more empowered community. Our complex, funny, provocative and inspiring stories have the power to create change. Now it's up to us to come out and start telling them.