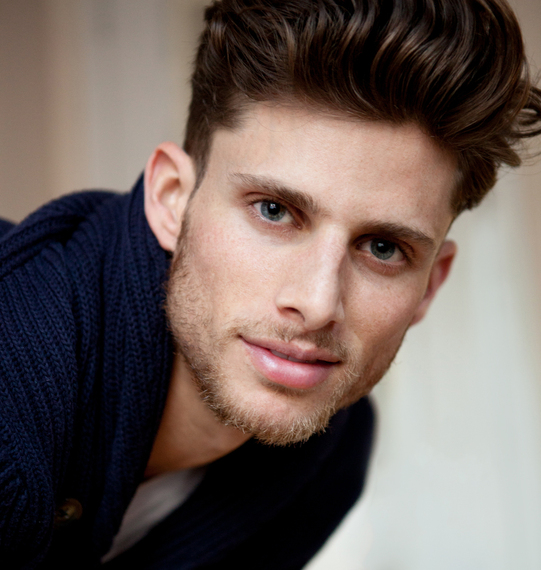 I've always been scared of the word "man"; today I take that word and own it!

I guess I should start with the fact that I'm an anomaly and have never really fit into any one category or group. It's something that I've learned to enjoy, as I'm able to comfortably fuse into many different situations. However, never completely belonging and being somewhat of an outsider can be taxing. I've always felt the need to explain myself, to have others understand me. I've lived under that pressure for a long time, and I pride myself on not letting it determine who I am.

With that said, I want to tell you something. It's something many of you know, and something the people closest and dearest to me have known for a long time.

Just writing it sends a rush of adrenaline through my body. That last bit of the metaphorical chip on my shoulder disintegrates, and a lightness has washed over me. I'm free.

This minute detail in the complexity of who I am ultimately means nothing to me, but so much at the same time.

I think what's so hard for me is that I probably would've come out much sooner, but being labeled "the gay kid" when you in fact do not identify with who that person is supposed to be is so hard on one's psyche. You fight so hard against something that you don't have a problem with but just don't connect with that it becomes a constant struggle. Had all the people I had pushing this on me just let me be me, I would've been able to figure out things so much more quickly, and without a sense of fear, pressure and hardness.

I know that this is something many people, gay or straight, deal with, to some extent, but the amount of focus I was subjected to on a daily basis from my "peers" was so daunting and constant that I felt as if I were constantly under a magnifying glass. Those "peers" were really just bullies unable to figure themselves out, too cowardly to focus on their own issues. So they turned their attention on me, a happy kid and an easy target.

And it wasn't just kids. Parents, teachers, and strangers all projected their issues onto me. I was happy just being me, even though I didn't know exactly who I was (I still don't), because I learned valuable life lessons so early on.

At the age of 6, I watched my mother, my hero, fight for her life with an illness that I still don't entirely understand. Watching her struggle was truly life-altering. When you see someone you love slowly die, you realize how precious time really is. My mom is my reminder to not live a life that just goes through the motions. Instead, I'm committed to living a life that is full, whole, happy and loving. Luckily, I can say I still have my mom 20 years later. It hasn't been without ups and downs, but she is still here and still fighting.

I share this story because it truly was a moment that helped solidify my foundation as a person. It's the oldest, most vivid memory I have and directly contributes to my hopes, fears, dreams, ambitions and neuroses. I like to think that I've been very in touch with my own emotions and feelings, and that I've used this event as a way to understand myself and adjust to the world. I understand it, I process it, and I use it to move forward rather than feeling victimized.

I want to explain how deciding to write this open coming-out letter isn't to serve my own purposes but to serve the purposes of the person who happens to read this and understands what life is like for himself, herself, or that kid they don't get. It is not about being comfortable around others. It's about being comfortable with yourself, which only gets harder the more people try to tell you who you are.

I've come out to many different people, and I've always gone into the situation knowing that in the end I would be supported. In fact, they'd probably love me even more because they'd finally get to see my true self. I knew that the people I chose to have in my life were, to put it simply, good people. They were and are those who have loved me for me, who let me be me, and who always saw nothing but Barrett. I know that, unlike so many, I'm blessed and lucky, because this is not the case for so many people who may encounter different reactions. For that I thank my friends and family for being the amazing angels they are.

It's easy to finally say all this because I've had the chance to live in New York City, where being an individual is praised. I've also lived in Los Angeles, where I had time to leave all that I knew behind and focus on finding out who I really was. I've given myself multiple explorations, adventures and experiences to help round out my life. Each step of the way has been scary and different and sparked something new in me, and each has been important. I've tried to appreciate every moment as best as I can, understanding that I will never be in this specific place in my life again.

I've learned that I don't fit in, and that I never will. I've learned that it's the best thing in the world to stand out in a crowd, to be that light in darkness. I've also learned that you will never be able to please everyone, so if you can be happy with yourself, then let that light shine as bright as that fiery mass in the sky.

I've also learned what I think so many gay people have a hard time understanding in the beginning: that there's not just one definition of what it means to be gay. People feel the need to label everything with a specific category. What I've found is that there will always be many intricate facets to me as a unique being.

Times are changing, and gays are popping up everywhere. Things like the TV show Looking, the marriages performed at the Grammys, and the daily celebrity coming-out story all exemplify how being gay is becoming just another "normal" in our abnormal world. However, there is still so much progress to be made, and so many obstacles to overcome in terms of finding true equality. Sometimes it's hard to fathom, as I've been lucky enough to live in liberal cities for almost 10 years, but homophobia is still very real for so many. "Gay" still equates to "bad" or "wrong" in so many places here and abroad, and we have to work to fix that.

Being gay is an ever-confusing concept not just for straight people but for gays as well. I think that so many of us suffer from daddy issues, mommy issues, both or none. I definitely have both. We are in the same constant search for love as everyone else. We confuse sex with love, love with sex. We are looking to fill an empty void in us, sometimes more so because, for so long, we couldn't figure out why people looked at us differently. We use hook-up apps to fulfill basic needs and then call ourselves sluts. We use dating apps to try to fill deeper needs and then are left feeling like there's no one out there for us. We go on first dates, which sometimes lead to second dates, other times to nothing at all. We go to bars to see and be seen. We hang out with our friends to remind ourselves that we have people we love who balance us out. "We," in the end, are just living day-to-day, like everyone else. Of course, there are differences, but in general there are far fewer between straight people and LGBT people than most would believe.

I've met many people recently who've asked me to promise that I'll never change. Never become jaded to the world around me. Never lose my desire to find love, my ability to be open and honest, and my pursuit to be as true to myself as possible. I promise.

To the person who reads this and goes, "I've heard all this before," I say, "Great!" By no means do I think I'm saying something that hasn't been said before. I'm simply sharing my story, my thoughts, my struggles. The slogan "It gets better" is beyond true. I joke that coming out was the best thing I ever did for my personal and professional life, but to be honest, it's true. There's an amazing network of LGBT people who will be waiting for you with open arms when you're ready. Not only does it get better; it gets fucking amazing.

Since accepting myself and coming out, I've met some of the most amazing people, experienced real love, and seen the world with a new sense of both beauty and darkness. Some things affect me more, while others affect me less. Throughout this process I've left Barrett the boy and have become Barrett the man. A man who released the shame he felt for wanting to love another man. A man who addressed issues that were holding him back. A man who has started to live authentically. A real man.

This is who I am now. Free and happy. And I wouldn't have it any other way.

All my love,
Barrett