Like many kids whose biological father skips town before they're born, while their teenage mother struggles to tie down a replacement "dad" to help raise them (what, this doesn't sound like your typical upbringing?), I had several sets of grandparents.

To make this equation easier to process, let's eliminate my paternal grandparents right off the bat; my sperm donor beat feet before the EPT was dry and his parents didn't want to have anything to do with me either. Class acts, the whole lot of 'em.

I know -- paging Jerry Springer. But here's the kicker:

In addition to the abundance of parental figures my mom already had in her life, there was another couple -- the parents of the boyfriend my mom dated just after I was born. And in the short time my mom and their son were together, a lasting bond was formed between me and the elders (my painfully adorable baby pictures can explain how that happened), ultimately resulting in another set of grandparents-by-default.

My Mom-Mom and Pop-Pop, as they were affectionately named, never faltered in their support for my mother. They didn't abandon her when everyone else in her life seemed to, but -- more importantly -- they didn't abandon me when the relationship between my mother and their son disintegrated.

In this instance, most people would have accepted the circumstances as they were, letting my mother and me saunter off into the poverty-stricken sunset, never to be heard from again. But they didn't. They treated me as their own by continuing to pursue a grandparent-grandchild relationship well beyond reasonable expectations.

I have many fond memories of my Mom-Mom and Pop-Pop taking me to feed the ducks in a local park, seeing Sesame Street Live!, and visiting Fort McHenry; watching movies; having breakfast at Bojangles; and spending countless weekends with them at their home consuming copious amounts of Jell-O and reading bedtime stories.

If there were ever two people who had unpolluted love in their hearts, it was my Mom-Mom and Pop-Pop.

Until -- in perhaps the most ironic-but-predictable twist ever -- they found religion.

My Pop was the first to let Jesus into his heart after Lucifer -- yes, that one -- "appeared" to him one night in a drunken stupor on his boat and told him that he was coming for him.

Following that incident, my Mom-Mom didn't hesitate to accept her new fate as a born-again Christian. At that point she would have done anything if it meant her boozer husband and drug-addicted sons would change their ways -- and so began the family's long journey to self-righteousness.

For many years after my grandparents became Christians, our relationship remained static. I was still very young when they joined the Southern Baptist Church -- about five-years-old -- so I had no concept of changes in behavior or ideology. They spoke about the Lord a lot and they sometimes took me to Sunday services, but that wasn't a negative consequence to me. It was what it was, and I thought I got better grandparents out of it -- which made me love them even more.

Eventually, though, I grew up. I wasn't that cherubic ginger grandson on whom they once doted. I went through puberty. I started experimenting sexually. I came out.

And that's where this relationship starts to hurt.

My mother -- who, after I came out, was disappointed, angry, and embarrassed by her gay son -- turned to my Mom-Mom for support, and in turn my Mom-Mom turned to religion for an answer.

She gave my mother a series of books to help me with my "problem." The names of these particular books escape me, but the gist of them was to teach me how to pray the gay away. Alas, secure and confident in myself after unloading the burden I carried on my back my entire life, I politely declined.

For a year or so after the initial shock of my coming out wore off, the subject of my homosexuality wasn't mentioned again. I thought perhaps everyone had warmed to the idea. My parents, incredulous in the beginning, had finally reached a point of acceptance, which made me believe that everyone else had fallen in line accordingly.

When I picked up my Pop to take him to a performance of Joseph and the Amazing Technicolor Dreamcoat at Christmastime 2004 (he loved Broadway shows and Jesus, which made him my first and obvious choice for a companion), my grandmother handed me a card, as she usually does around the holidays. Inside the card was a gift check, the amount of which was quite a substantial increase from previous years -- and that had me excited.

Underneath the check, written on the inside of the card, however, was the most painful, passive-aggressive season's greeting I have ever received: "Merry Christmas. I hope to see you change before I die."

Upon reading that, I took one swift breath, sucked the tears back into my face, smiled, and said thank you -- without ever verbally acknowledging the words on the Hallmark. My Pop and I left the house and enjoyed the show.

My Pop -- with whom I had a genuine and mutually understanding conversation about my sexuality (at least, I thought it was) on the ride home later that night -- died less than a year later. That excellent night is one of the last memories I have of him and I'm so thankful it's a positive one.

In the context of that chat then, what saddens me is that I'm not sure I can expect the same from my Mom-Mom before she passes.

It's been nearly eight years since she handed me that emotionally charged Christmas card, but she's still stubborn to accept -- or even respect -- that I'm gay.

The last time I spoke with her -- about four months ago -- I told her that I'm now married to a wonderful man and that I'd like to introduce her to my husband the next time I return home. In her signature Christian style, she brushed off the request sweetly and told me that she worries that I'm gay because my biological father left me and that I might've been sexually abused as a child.

That's when I ended the conversation.

I rebuffed her claims, telling her that although my biological father left before I was born (as do too many fathers -- of gay and straight children), I was never sexually abused, and that I'm disappointed that the love and admiration I have for her is sullied solely by who I am.

We haven't spoken since.

In the 31 years I've been alive, I've never celebrated a birthday without receiving something special in the mail from my Mom-Mom -- including the many years it's been since I came out.

This year my mailbox was empty.

I don't know if she's trying to make a statement -- that she doesn't condone my "lifestyle" and will not support it with a greeting or gift any longer -- or if she simply wants my "sin" out of her life. Whatever the case may be, the reality is that our time together in this life is severely limited, and I become increasingly more aware of that as each day passes.

I miss my Pop, but I'm satisfied with the relationship we had before he died. We disagreed on the issue at hand, yes, but we respected and loved one another despite it. I'm not sure I'll be able to say the same about my Mom-Mom -- a woman I have appreciated and cherished my entire life. And that breaks my heart in half.

As I sit here thinking of ways to finish this essay, water is welling in my eyes. I have no quippy conclusion, no flippant sendoff that wraps this up nicely in a bow. The fact is, it's an open-ended turmoil with which we both have to deal. Do I wish my Mom-Mom could truly see the light she claims to hold so dear and expunge the hate from her heart? Of course -- but I'm not holding my breath.

We are who we are -- me, a proud gay man; her, a proud woman of God -- and it's likely we'll never see eye to eye. I do hope, however, that one day -- sometime far in the future and in another dimension perhaps -- we can once again walk side by side and love each other completely and purely.

Just like we did when I was a little boy. 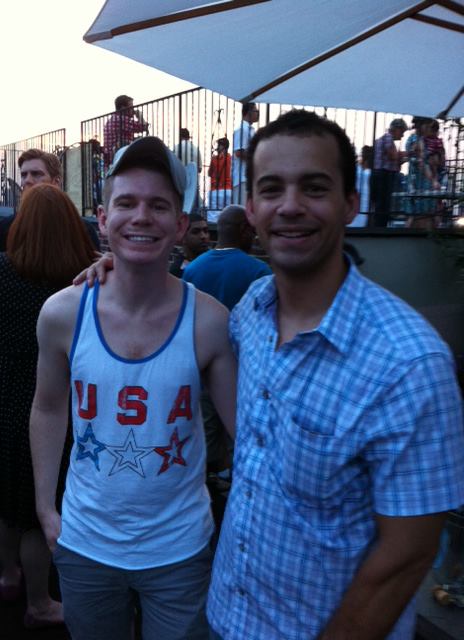 Mikey Rox and his husband