After twenty-two novels, my new book, Fever Swamp, is an account of the 2016 campaign focused on the rise of Donald Trump. This project began with weekly columns in The Huffington Post, to which I've added extensive annotations and original writings -- all in an effort to explain what happened, assess how this presidency will challenge our society, and encourage Americans of all political stripes to stand up for what is best in us.

I'm often asked why I abandoned fiction to write about the reality which gave us Donald Trump. But this strange, dramatic and unpredictable campaign rewarded the central component of any good fiction -- the study of character and, in particular, this character. Understanding Trump is central to understanding what our society has become, where we are going, and how best to fight for the country we should be. For Trump is the product, not the cause, of the corrosive divisions which have separated Americans from each other, and from any common understanding of our national purpose -- or even of what is true.

To an unprecedented degree, our president-elect is the product of, and the purveyor of, fictions -- and dangerous ones at that.

I began writing about these issues in September 2015. One spur was a truly alarming perception: the Republican presidential debates had become a transmissions from an alternative America conjured from some mass distemper.

Nothing much anyone said made sense in terms of truth or reason. A menacing mythology hung in the air. Mexicans were pouring over our borders; Muslims in New Jersey were celebrating 9/11; Obamacare was as bad as slavery; the Chinese were occupying Syria. These assertions, and many like them, were staples of the debates. And an audience full of people who looked like much like everyone else, but a lot more Caucasian, were cheering wildly.

The characters were equally bizarre. The dominant figure kept insulting everyone else and claimed to be close to Vladimir Putin, a murderous autocrat he had never met. The only black man spoke largely in indecipherable haiku. The only woman seemed mean as a snake, a spectacularly failed ex- CEO who relied on mendacious talking points. The young guy kept repeating the same hysterical attacks on Barack Obama with the near comical ferocity of a chihuahua yipping through a screen door. And the guy who looked like Joseph McCarthy sounded like a televangelist too insincere for all but true believers to believe.

Nor was the America they described the flawed country many of us could recognize. It was a dystopian tyranny and yet, oddly, an enfeebled nation which only a strongman could save. But this was not happening in a movie, but in the America of 2016, and Donald Trump was an increasingly serious candidate for president of the United States.

This was why I undertook to write about the campaign. For it quickly became apparent that the normal tools of analysis did not apply to this race and, in particular, to Donald Trump. From the outset, no matter what he said or did, his support within Republican primary voters -- and then the electorate as a whole -- grew in numbers and intensity. But why?

A critical reason was the GOP's indifference to the economic anxieties of its voting base -- struggling whites. Another -- which cannot be glossed over -- is that Trump ripped the scab off the base's racial anxieties, scapegoating Mexicans, Muslims and minorities. Still another was his fantastical vision of American renewal: restoring manufacturing jobs lost to automation; repealing the realities of the global economy; walling off Mexico; commencing trade wars with China, and crushing ISIS with one blow of his iron fist.

Beneath this lurked a craving for authority embodied by a man who reveled in the role of superhero. A man who promised his followers that only his greatness could make America great again. A man who conjured a fantasy world from the polarization, disinformation and dysfunction his party had done so much to create -- until millions of our fellow citizens saw him as their last chance in a threatening world, a human Powerball ticket.

But even as Trump seized his party's nomination, dangerous portents accumulated regarding his internal makeup. He seemed to have no second act at all -- raising grave questions about what drove a persona he seemed unable to change. Particularly startling was his constant pursuit of petty personal grievances, his seeming addiction to the toxic tropes of bigotry, and a penchant for lying so pervasive that truth lost all objective meaning. His inner world seemed to include no one but himself. And yet, paradoxically, his candidacy held up a mirror to the anger and alienation from which he sprang.

For the drama of Donald Trump was far greater than one man's psychodrama. He had hijacked a major political party whose erstwhile leaders, by and large, acted like hostages to a political terrorist -- parsing, rationalizing, enabling, and sometimes joining in to drag the campaign ever deeper into a fever swamp where truth, honor and civility went to die. They had been tiptoeing on the edge of this swamp for years, and now they were knee-deep, shouting that Trump alone would save us from the dreaded Hillary Clinton.

And so a growing number of Americans countenanced a candidate transcendently unfit in terms of preparation, character or emotional stability. Worse, many came to believe in the fictions he spun -- no matter what. They believed him when he claimed that America was flooded with ISIS operatives from Syria; that thousands of illegal aliens were poised to vote against him; the statistically non- existent voter fraud was rampant; that America's electoral machinery was rigged. They believed his incredible denials when a growing list of women accused him of sexual predation. And when he departed from all tradition by refusing to commit to honoring the election results, they applauded.

Trump was no longer running a campaign -- he was dividing the country by driving a stake through the heart of our civic traditions. A candidacy which began as farce was ending in tragedy, with a cost as yet unknown.

So now what? When a president is so barren of knowledge or principles, it is hard to say. Paul Ryan and Mitch McConnell will be full of plans, aiming to bend Trump to their purposes. New Republican vistas will be plucked from the old conservative wish list -- repealing Obamacare, reversing our commitment to combat climate change, abandoning the Iran nuclear deal, passing tax cuts for the wealthy, and appointing a Scalia clone to the Supreme Court.

But what of the brave new world Trump promised his supporters -- most notably the base voters whose concerns are not those of Paul Ryan? What of tariffs, trade wars, tearing up NAFTA, infrastructure spending, and term limits? What of protecting entitlements, middle-class tax relief and preserving at least some of the protections of Obamacare? Will Trump end up as a Trojan horse for Ryan and McConnell? If so, what happens when his voters discover that their hero is surrounded by the elite he campaigned against -- a vacant and blustering captive of the system he proposed to upend, and whose own ethical and moral squalor makes the swamp he promised to drain more rancid than ever before?

That could well be the price of electing a demagogue who will say whatever serves him in the moment and whose campaign, above everything else, exemplified an utter lack of conscience. Either Trump becomes a tool of the Republican establishment, content with playing monarch, or he will be at war with his own party. His domestic cabinet appointments are bewildering -- a gaggle of traditional conservatives divorced from the populist message of his campaign. But one thing is certain -- his ignorance and instability will lead to risk at home and abroad, worsened by a fractious team of advisors throwing elbows at each other. And only one thing could make this even worse -- an opposition party which is cynical and self-serving, content to let Trump wallow in his own mess at whatever cost to the country.

That is the ultimate message of Fever Swamp. Not simply the Democratic Party, but all those who care about our country, must do our level best to reach across the divides Trump widened to address the ills that he exploited. We must stand up for decency, diversity, civility, inclusion, the rule of law and genuine opportunity for all. We must always remember that what makes America great is that which makes it good. And we must never forget who this man is, and what our country yet can be if we strive to make it so. 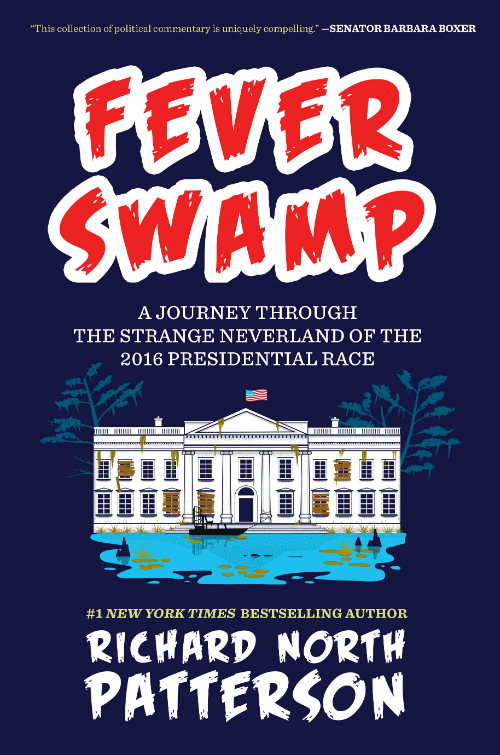