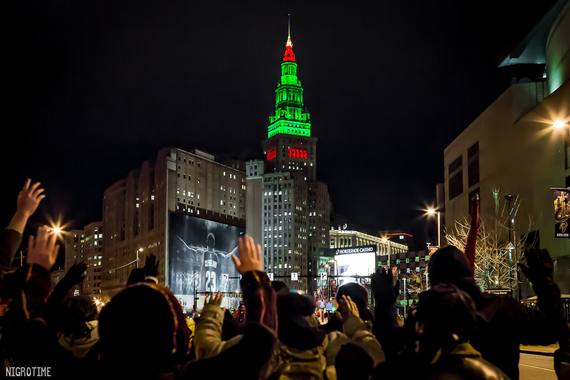 A Cleveland police cruiser lurches forward into a coterie of protesters and stops dangerously close to hitting a number of us who, along with about 150 others, had taken the streets for a second day in a row since the local grand jury decided not to indict the officers who shot and killed 12-year old Tamir Rice.

And then, quite unbelievably, the officer behind the wheel does it again; he continues his odd and unnecessary game of chicken with the protesters. A siren blast. An engine rev. And then the cop bucks his car closer. And then he does it again. 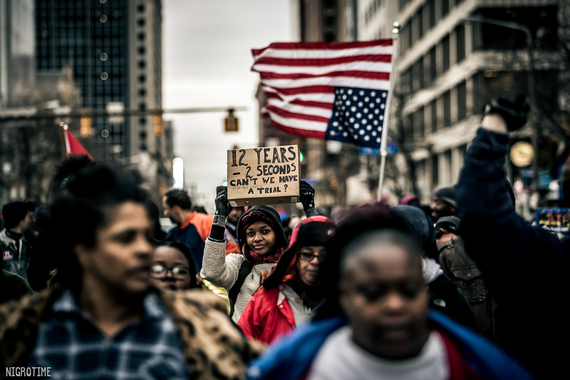 Most protesters in the pathway of this cop's Mad Max fantasy cleave and re-position themselves on either side of the vehicle, cell cameras out and voicing their WTF's at high volume.

One of the protesters is 25-year-old student, Alana Belle. She's not necessarily in the thick of this mini-escalation gathered around the car; she's 10 to 15 feet beyond the hive, helping organize the larger group, as she had been doing all night, to form a vast human circle that would block the entire intersection of Ontario and Huron Roads.

The cop paws his sunglasses onto his face - it is night, by the way -- and then lops his officer's cap onto his head.

One of the kinder phrases yelled at this officer was "What the hell is your problem?" Which was a very good question, indeed. There had been little escalation within this tense situation up until this point. In fact, the protest that wended its way through the downtown streets during the four hours prior was essentially police escorted. At every intersection the police enabled non-violent civil disobedience to take place. Granted, anyone at any point could have been arrested but that did not seem to be the order of the night. Peaceful protesting was.

So what was this police officer's problem?

The answer resides in what he said next. Moreover, his answer manifests the bullseye that exposes the systemic problem within our country's law enforcement, which infects and affects us all. 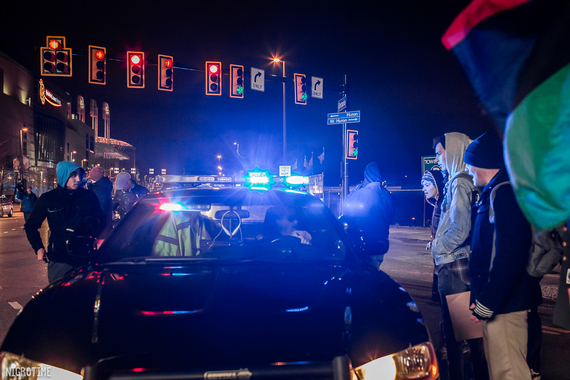 The officer's game of chicken

I took my last head-on shot of the cop's simmering road rage and then peeled off to the driver's side. Through the protester's phalanx of antagonized incomprehension, the officer jacks his car forward once again and then... guns it. This time he wasn't stopping. This time he was heading straight for Sarah Pepe, a 16 year-old student at Lakewood High School (who is white) and also the aforementioned Alana Belle (who is black).


"He drastically sped up," Belle said. "Reflexively, I jumped out of the way and turned around in time to see him stop his vehicle and crack his passenger window."

This is when the nearby group, including myself, heard the officer yell at Belle...

"We were all in shock when he said it," Pepe said. "[Belle] couldn't even move. She just watched him as he sped away."

And Pepe is right; those who heard it were astonished. It wasn't said in jest. It was said with malice, arrogance and utter ridicule. It was an intentional baiting meant to escalate anger and thereby give him, and/or his fraternal cult, the blessing to entrap, arrest, render excessive force, or ruin people's lives. 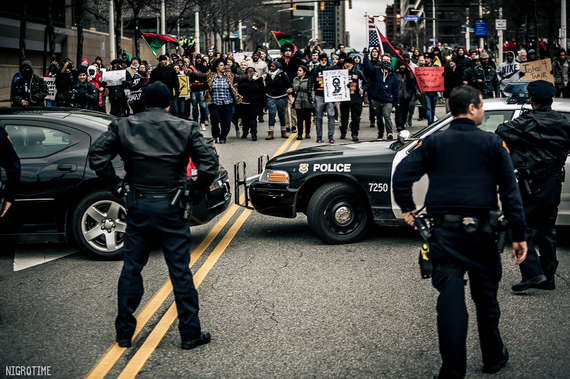 The first standoff at the entrance of the Cleveland shoreway


This brings up the cluster of Cleveland media, from nearly all the local affiliates, who stood by watching the entire incident playout but then proceeded to do nothing. They didn't find out who this officer was. They didn't approach the Legal Observers. They didn't hound the officer's superiors, who were also on the scene. They stood there and turned their corporate lenses away.


"Absolutely no media I've seen covered my incident. None," Belle said. "Considering how little our local media advocates for the people, I'm not surprised." 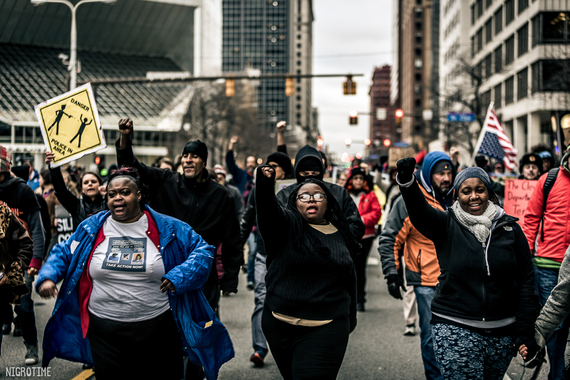 It is one thing to stay on the sidelines and report on, say, LeBron James or a trendy new restaurant, to pretend that these commodities are the embodiment of the city, its spirit, its grit and determination. Fine. Perpetuate that if you want. If, however, you're a journalist and you willingly neglect an incident that unfolds before your very lens, than you are complicit in hindering the change that the people, the true fabric of any city (not just Cleveland), need and deserve.

Perhaps you've heard of Officer "Go-Fuck-Yourself," Police Lieutenant Ray Albers, who pointed his assault rifle at protesters and journalists last August 19, during the Ferguson protests, threatening to kill them. When asked for his name and badge number, he declined to provide it, and instead said,"Go fuck yourself."

Meet Officer Brian "You-Want-To-Be-The-Next-One" Dorin. Badge #1628, Squad Car 7211. Once he yelled his reprehensible phrase, the protesters rallied the legal observers to obtain his badge number. Officer Dorin then decided to aim his body camera (as seen in the photo below) and record us. Good. I'd love to see if he even turned it on. I'd love the body cam video of him threatening Alana Belle to go viral.

After requests for comment on the incident, the Cleveland Division of Police Public Information Officer, Sergeant Jennifer Ciaccia, replied in an email:

"Upon receiving your inquiry, the Cleveland Division of Police began an internal investigation into the allegations made."

Dan Williams, Media Relations Director of the City of Cleveland, replied by phone stating that, "We take any allegation of this nature very seriously, which is why we are going to investigate it."

Alana Belle is compiling still and video evidence and is now in the process of filing a complaint against Officer Dorin. 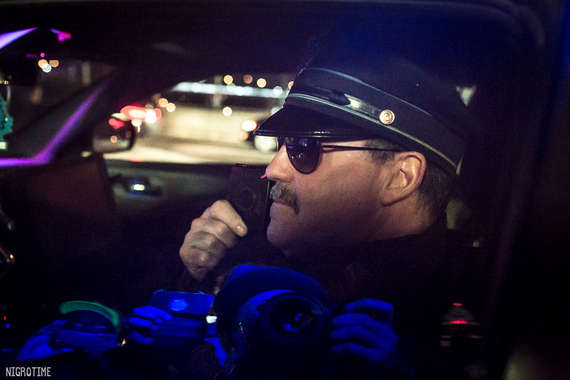 Social media is filled with far, far worse acts of abuse at the hands of the police. But granularly examining this type of fraternal bullying (deemed "acceptable" within their circles) reveals the connective tissue that perpetuates a broken institution and ripples divisiveness outward into communities, cities, states, and the country.

Think of the concentric circles of mistrust that have already ebbed outward into the Cleveland community all due to Officer Dorin's behavior. On the very night of the incident, Sarah Pepe, the 16-year-old who was almost hit along with Alana Belle, wrote about it on her Instagram page. Her post garnered 185 likes. And it ripples outward from there, to her 1,790 followers. 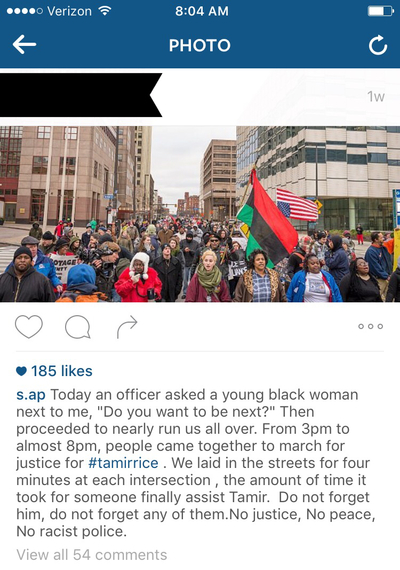 Also exemplifying this is what occurred following the incident with Officer "You-Want-To-Be-The-Next-One" Dorin. After the Cleveland press corps had ignored their journalistic duty to suss out who this reckless cop was, the march eventually moved east to Huron Road, the street that abuts the Quicken Loans Arena, where the Cleveland Cavaliers play. On this night, however, The Lake Erie Monsters, a professional hockey team, were playing and the fans were filing into the arena. Some ignored the protesters, some offered words of support, others jeered get-a-life, get-a-job, and then there were even those asking who Tamir Rice was.

The protesters, once again, formed a huge circle that blocked all access for cars. This time two unmarked cop cars entered the circle and tried to pass, both attempting to bumper-budge the protesters from their position but, no. Not this time. This time arms were locked and no one would move. 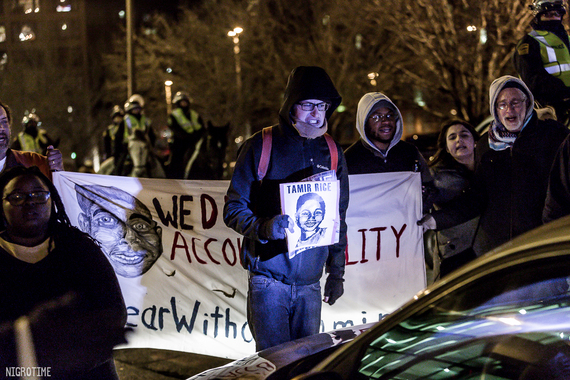 Refusing to disperse outside the Quicken Loans Arena

Cleveland's Chief of Police, Captain Calvin D. Williams, entered the fray and maintained an affable and non-threatening demeanor. But the inevitable warning-of-arrest was sounded. Cops on horseback, who had been trotting at a distance for the majority of the action, hoofed up just behind the locked-armed activists. 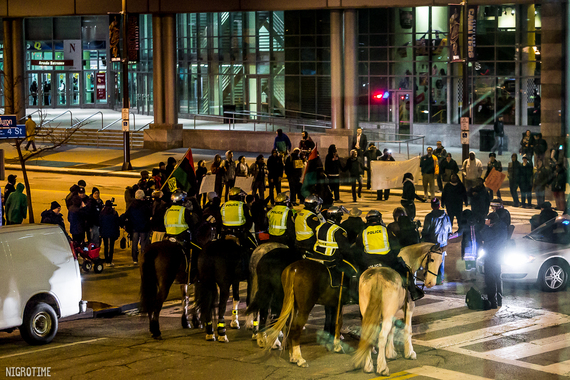 
And then, in came a busload of the Sheriff's riot squad. The activists stood their ground (without guns) and risked arrest for nearly 30 minutes. The riot squad beneath their municipal bulk retreated, the unmarked police cruisers backed away and the march proceeded. 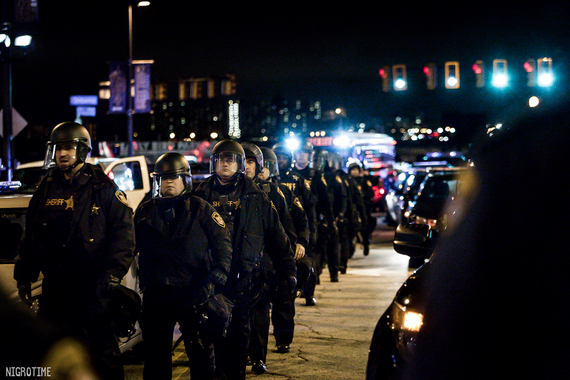 
This is the exact type of moral victory that is needed to create incremental change in an extremely violent and broken system, to coalesce communities, cities, states and the country.

Will Officer Brian "You-Want-To-Be-The-Next-One" Dorin be disciplined? Who knows. But it should be noted, according to Belle, that the very next day, at another protest for Tamir Rice, officer Dorin was back in the street serving and protecting the hell out of people. Including Belle.

"He physically tried to move me from where I was standing," Belle said, "There were several officers standing behind me, and two in front. I started yelling at him, telling him to stop touching me. He made the statement 'I don't have to take my hands off of you. If you put your hands on me, that's assault.'" 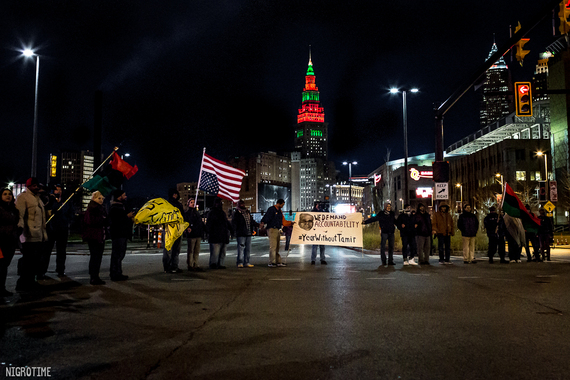 Protesters blocking the intersection of Carnegie and Ontario


But will it even make a difference if Officer Brian Dorin is reprimanded? What, really, will happen to him? Will his reprimand be any worse than Officer Timothy Loehmann's and Officer Frank Garmback's? Those two cops shot an unarmed 12-year-old and are still on the Cleveland Police force, on restricted duty.

Why is that typical? Is it because, for too long, we've let it become acceptable? Instead of protecting and serving a community, cops are largely interested in policing it, overpowering it, even dividing it with thoughtless acts of intimidation and violence. They are given a free pass to violate even the most basic of human rights. And they are becoming more immune to the voices of those already deprived of dignity, whether due to race or class.

Since when did a badge, cruiser and a gun grant one to be wholly above the law while assigned to uphold it? It's time to stop this charade. Because even those who choose to keep quiet, even those who cheer court side or stand in line for that hard to get table, even those who turn their lens away, even those who ignore or deny what is happening in our communities, cities and states, even those people could very well be... the next one.