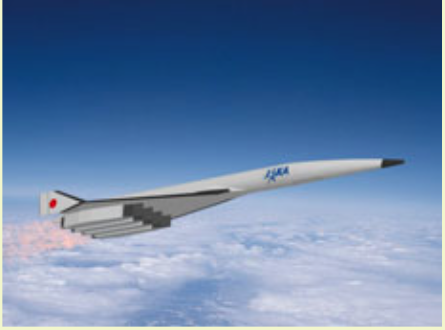 As a hypercompetitive sort of gal and bemused observer of the motivation smack-talk can induce, here's a challenge I've been noodling lately: America, it's time for more investment in long-term thinking because Sputnik 2.0 is about to achieve lift-off. And what is this equivalent to Sputnik you ask, gentle reader? Why the Japanese supersonic passenger jet planned to launch in 2015 to carry passengers from Tokyo to New York less than five hours, of course.

Yes, our friends the ever industrious Japanese are again busy at work innovating for the long haul, this time developing a supersonic passenger jet planned to launch in 2015, a plane I for one look forward to climbing aboard. Even if we assume that as with most major technological breakthroughs, the actual launch will get pushed out a few years and it may not initially go as fast or be quite as affordable as current predictions, it's time to sit up and take note.

JAXA (Japan's counterpart to NASA) is hard at work bringing back supersonic air travel similar to the Concorde but this time faster, quieter, and able to carry three times as many passengers. With an estimated airspeed of Mach 2 (1,522.3 mph) and a seat price comparable to that of a commercial business class airfare, it would mean transporting 300 fliers at a time from:

The earlier Concorde, jointly developed by Aerospatiale and British Aircraft Corporation in 1969, flew from NYC or Washington DC to Paris or London in roughly 3 - 3 1/2 hours. In 2003 flight service was discontinued however. Reports pointed to the crash of Air France Flight 4590 in 2000 as the reason for its retirement. But industry leaders unofficially admitted its closure was really due to lack of profitability. The old style supersonics were just too expensive to maintain, heavy bodied fuel-guzzlers that could carry only 100 passengers at a time, and sported a sonic boom that largely limited them to overwater flight routes.

Until relatively recently Japan was prohibited from aeronautical development; a remnant of America's post-war occupation. Once restrictions were lifted, however, Japan leapt with enthusiasm into aircraft development, most recently playing a substantial role developing Boeing's new Dreamliner.

So what is it that's made our neighbors in Japan show the kind of industrious penchant for big inventions we used to lead the world in?

For an answer, travel back to 1997 when Toyota introduced the Prius to America. Initially ignored as unnecessary, Toyota continued to refine the technology and expand the number of its hybrid models not because they were profitable but until they became profitable. Their long-term play was to decrease their own dependence on foreign oil, not just sell cars. Within a decade Ford realized it had missed the boat and struck a deal to license Toyota's hybrid know-how. When the New York Times reported the deal in 2004 they remarked, "American automakers have been less enthusiastic than their Japanese rivals about hybrid vehicles, arguing that it is difficult to justify the added cost of the technology when few American consumers seem concerned about fuel economy

Ah, but how times change.

As Steve Jobs used to argue, customers don't always know what they want until someone first creates it for them. It's the role of leaders to stand at the forefront, searching the world for best practices, keeping an eye on the larger landscape, and play for the long-term. Toyota saw that with the Prius, and we should see it now too before those shiny new hybrid supersonics touch down at JFK while half our fleet still begins its journey with someone at the propeller screaming "contact!" (Okay, I exaggerate about the propeller bit, but the gap in innovation is not as far off as you might think.)

Japan is tackling the problems that plagued the original Concord and seems to have come up with innovative solutions. They have, for example, redesigned the aerodynamics of the airplane body and developed new materials for its construction that reduce the sonic boom. Moreover they're increasing fuel efficiency by integrating their own hybrid-like technology, which allows them to increase the number of passengers to make the planes' operations financially viable.

The whole thing has gotten me to thinking: Maybe it's time for Americans too, to fall in love with science again and begin thinking long-term like we once used to before our friends around the world leave us in their vapor trails.