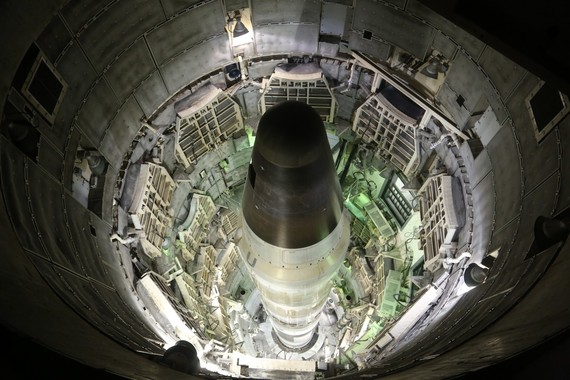 You know what's scary? A teenager dropped a wrench onto an aging but still very potent nuclear missile. Even scarier is that the wrench hit so hard it poked a hole in the missile, which led to a fuel leak, which led to a massive explosion, killing one man, injuring others, and destroying the launch facility. The good news is that it didn't wipe out the entire Southeastern United States.

It really happened in 1980, in Arkansas. It wasn't a secret. Arkansas's young governor, Bill Clinton, appeared on television to reassure Arkansans that everything was all right. What is really terrifying is that 36 years later, with the stored weapons 36 years older and more vulnerable, almost no one even remembers it, and it was just one of many "broken arrow" accidents involving nuclear weapons stored on US soil. That's just the ones we know about that took place in America. Who knows what is going on in other countries?

Based on a book by reporter Eric Schlosser, a new documentary called "Command and Control" tells the story of the Titan II Missile explosion in Arkansas with riveting interviews and seamless re-creations, moment by moment of the night the young airman dropped the wrench and the steps taken at great risk and great speed to prevent widespread contamination. We see how painful the events still are to the people involved and how terrifyingly close we -- meaning all of us on the planet -- are to complete accidental annihilation. Schlosser, whose calm delivery somehow makes it seem even more dire, has assembled a terrifying dossier of denial and neglect.

In an interview, Schlosser and director Robert Kenner talked about making the film and about the prospects for doing better.

The review of the 1980 incident concluded that it was the result of "human error." Isn't every failure under our control the result of human error? Wasn't it human error that made missiles that have fuel explosions when they get hit with a wrench?

RK: Or it's human error that they didn't have a safety net. And the problem is human error shouldn't have that kind of consequence.

ES: It's a way of defending the system.

Would you say that the response to the 1980 accident did not lead to improved safety?

ES: The reporters in 1980 were hampered by their lack of ability to know the truth, which was that this warhead could have detonated. So this was a story that lasted for about two or three days and then it was largely forgotten. And if the Pentagon had been forthright that there were significant safety issues with this warhead, that there was a chance that it could have detonated and destroyed much of Arkansas and planted/deposited radioactivity up and down the eastern seaboard then there might have been more inquiry into what happened, how it happened, who is really to blame.

The Air Force in 1980 was in a tough spot. It was the height of the Cold War, the Russians had recently invaded Afghanistan, our nuclear arsenal was aging, our weapons systems were aging. They were reluctant to admit publicly that one of their crucial weapons, the Titan II missile, was old, obsolete and probably should be taken out of service. They were unwilling to do that, so instead of making that kind of admission there was an incentive to blame the little guy, to blame the operator, to say it was a mistake in human error that was responsible but as you implied at the very beginning, the human error was to believe we could create these systems and safely control them.

RK: We have to figure out where to put our nuclear waste from the plants that are powering much of the country, and you could tell that story. I think that such an amazing example of human error, that sort of hubris that this is controllable.

ES: This is a contemporary story. We have one repository for nuclear waste that we've opened up, a Waste Isolation Pilot Plant, the acronym is WIPP, and it's in Carlsbad, New Mexico. It's for transuranic waste to like plutonium and uranium and things like that but you really have to worry about plutonium. That can be deadly for tens of thousands of years, so they built this multibillion-dollar facility. It's supposed to keep waste safely for tens of thousands of years and 15 years after it opened just a few years ago there was an explosion there and the explosion contaminated it with plutonium. They were trying to figure out why there would have been an explosion and it was because of Los Alamos where they were packing these big drums within their waste they were using kitty litter as a kind of moderator to prevent the stuff from reacting chemically and they used the wrong type of kitty litter.

RK: The most costly accident in US history.

ES: And so, here we build something confident that it would be secure for 15 or 20 thousand years and there is an explosion after 15. So maybe there are just certain things we should not do.

RK: But that's the dark side. We were in England and the English Secretary of Defense talked about how we can get rid of these things, that we shouldn't just think they are here and we are doomed because we got rid of chemical weapons. We are capable of changing the world and making it what we want. I mean our goal with this film at least is to make people think about the one issue, it's the most important issue that we are not thinking about.

Are other countries doing better? Or worse?

ES: Well look, I'll be patriotic for a moment, we invented this technology, we're more experienced in it than any other country, I bet we built the best goddamn new nuclear weapons in the world, and it's terrifying. Look at how close we have come to blowing ourselves up. We have serious, serious nuclear weapons accidents. And in the book, I look at the rate of industrial accidents in the different countries that have nuclear weapons as a rough measure of their ability and capacity to handle complex technological systems, so that's very concerning about India, Pakistan, Russia, North Korea and it's another argument why countries shouldn't have these things.

It's a huge concern right now, and not just among journalists or activists but at the highest level of the government there is genuine concern about the security of our nuclear command and control system, it's a computerized network. It's a closed network so you can't just go online and tap into it but it has many, many nodes, many, many sensors, many, many humans and it's vulnerable to insider attack and there would be a very strong incentive in the 21st century, to do harm. In the 20th century if you wanted to knock out your adversary's nuclear arsenal, you had to do it with your own nuclear weapons. Well now it is conceivable, you could render it inoperable without ever having to touch it, or damage it, with software, even just cutting off the electricity. The true concern, the most remote possibility, is that someone could hack into the nuclear commander control system and launch a missile. It's not inconceivable but more likely is somebody hacking in and trying to disable the arsenal or at the very least create uncertainty about the system. Once you start seeing anomalies in your system can you trust it, can you rely on it?

I think the President of United States is pretty great on this subject. I think that there is no political movement that would help them in any way. I think the speech he gave in 2009 was so far ahead of any kind of public awareness that we need to catch up to where he was seven years ago. I think it's a safer world now than it was then, so things can change but part of it is to become conscious of the most important issue that no one is talking about.