Commencement season for a college communications office is a crazy time. There's barely a moment to reflect during the busy, end-of-semester weeks; yet each year, as I collate remarks for our culminating event, I get emotional.

I love Commencement. I love Commencement speeches. Year round, I scour the web for inspirational addresses. I take notes and keep a folder of quotes spoken by well-known pundits or people I work with every day. I savor the nuggets of wisdom, the stories of overcoming challenges, the lessons in each.

The speech that's received much social media attention this season is Facebook executive Sheryl Sandberg's Commencement address at UC-Berkeley. In it, Sandberg revealed her personal anguish since her husband's death last year and what this has taught her about life. Her messages: in adversity one can choose joy and meaning, and practicing gratitude is the key to resilience.

In my eighth year of gathering the scripts for Commencement at Southern Vermont College, I still love the wellspring of emotion, grit and knowledge shared at these events. At SVC's Commencement last Saturday, speakers quoted the usual suspects (Einstein, Churchill, King) along with their own tips: set goals, get involved, take nothing for granted, trust your struggle, remember this place, have faith, give back. Captain Jean-Luc Picard of Star Trek got a word in when a student speaker quoted:

Commencement keynote addresses usually get a bad rap; someone always says, "no one ever
remembers this speech." At SVC, award-winning journalist Mike Donoghue '71, who recently retired from a 47-year career with the Burlington Free Press, elicited a standing ovation from the graduates when he approached the podium, spoke one word: "curiosity", and sat down again. After the students briefly celebrated the possibility of experiencing the shortest speech ever made, Donoghue returned to the lectern. He would render much wit and wisdom on them in the next 15 minutes starting with,

"I thought if I said only one impressionable word, you might remember your Commencement speech. ... I hope curiosity will stick with you for a lifetime."

SVC Board of Trustees chair and alum Ira Wagner '83 told his story of curiosity, which led him from a stint as a car mechanic to a career in international finance. We heard from a young mom, a 'non-trad' student, who went back to school to fulfill her dream of becoming a Biological Scientist. A student-athlete from Baltimore movingly thanked the SVC Men's Basketball coach for giving him a chance to play ball and get a degree in Radiologic Sciences. He acknowledged with pride his SVC "colleagues who had persevered through rough city lives" to graduate that day. Two students presented the President of the college with their published novels through a Humanities initiative at the school.

The stories from SVC's Mountaineer Scholars program are particularly heartfelt. The program supports urban, first generation students who demonstrate drive and tenacity. Crossing the stage to get his diploma on Saturday was Greg, who recently told me of his post graduate plans to go back to Harlem to start an after school, college prep program for high schoolers, so that they might have the same opportunities that he did. I cheered for Jamal--a student who came to SVC shy and reserved. Now, a well-respected leader, he received one of three coveted Commencement awards for his contributions to campus life.

Lissa, another Mountaineer Scholar, achieved her Bachelor's degree in three years and has a job as a paralegal waiting for her in New York City. She was one of several graduates who had 20 or more family members attending Commencement on Saturday. Think about that for a second: 20 people who made the three-hour drive to see her graduate. There is much applauding to be done for the first in the family to earn that degree.

What is it that's special about Commencement at Southern Vermont College? "It's simple," said SVC President David Evans, "It's about joy. Joy for all of us, as we have really come to know each other. But joy especially because a large group of students graduating didn't even think they would get to go to college." 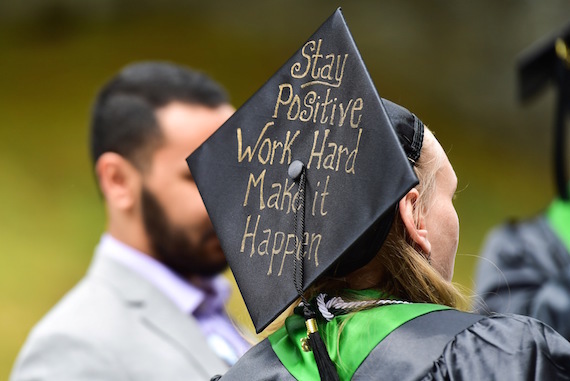 Small, liberal arts colleges are doing worthy things, as President Evans likes to say. This, at a time when higher education is being scrutinized and picked apart in the media for issues ranging from the worth of a diploma, to the burgeoning student debt, or reports of sexual assault. All of these things are happening at a time when some schools are boasting endowments the size of the GNP of a small country and other colleges are closing their doors due to financial constraints.

In her farewell remarks to the class, Professor and Chair of the Hunter Division of the Humanities Jennifer Burg reminded the students that she started at the same time they did in 2012. "I left where I lived, and the people I knew, and the life that I knew because of you--although I didn't know you then," she told them. "I also didn't know then how much more you are than everything I expected. ... What you have done here since we arrived has made me better. And I am grateful."

Despite today's many challenges in higher education--in the world for that matter--I know I can count on the feel-good energy that comes from the sentiment served up at graduation. Even a reporter told me, amid the clapping and cheering, "SVC's Commencement is my favorite." Somehow, I feel that we are all the better for it, because it reminds us of what we're here for.