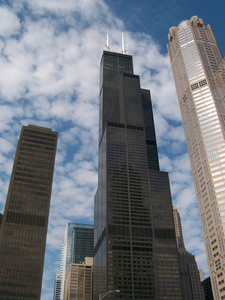 The news last month that Chicago's Willis Tower is selling for $1.5 billion suggests that the muscular former Sears Tower is now a 108-story bubble on the city's skyline. The sale price sets a new record for commercial buildings outside New York, but it's just one of the many new benchmarks that commercial real estate has set recently. They're fueled in large part by the epochally low interest rates that have prevailed since the country's mid-2000s financial crisis.

The easy-money years, during which the Federal Reserve Board has held down interest rates in order to stimulate spending, have been fun for some, but eventually they have to end. For more than six years, Fed officials have kept the lid on, purportedly hoping to see spending spark job creation, and better employment in turn spur more spending. But the results have been lackluster, and in late March, Fed chairwoman Janet Yellen once again declined to give any specifics on when rates will begin climbing.

Her refusal to nail down a start date was understandable; the economy's long-sought improvements have not readily materialized. The latest data on employment, which came out Friday, brought new disappointment. After a year of reasonably good job growth nationwide, the job market stumbled in March, coming in with the lowest number of new jobs since December 2013.

Nevertheless, most analysts believe the economy will grow and a climb in interest rates is inevitable. When it comes, the buying binge on commercial real estate may skid to a halt.

Money has been flowing through commercial real estate like a storm-powered river, pushing transactions to ever-higher prices both in U.S. cities and abroad. Bloomberg Business reported recently that U.S. investors are stocking up on European properties at levels that are approaching the pre-bust 2007 peak. They're doing this in part because the feeding frenzy in this country has pushed prices up so fast, buyers have to cross the ocean to find sweet deals.

Of course, the commercial real estate world is a playground for affluent investors, not Main Streeters, so the party has a distinctly One-Percent result: the big payouts serve to deepen the nation's wealth divide. Big investors pocket big money on these deals, but it rarely goes to job creation or trickles down in other ways; it goes to more and larger investments. As a result, Wall Street is likely encouraging the Fed to keep rates synthetically low and let the party roll on.

When the Federal Reserve finally lifts the artificial lid on interest rates, the value of commercial real estate will drop by 8 percent to 19 percent, Real Capital Analytics forecasts. The assumption is that today's sub-2 percent 10-year Treasury bond yields would normalize at a healthier-for-all 4 percent. As the cost of debt increases, property income decreases and values fall. Other asset classes that are basking in low interest rates will also lose value as the Fed lifts interest rates in an effort to control the other demon, inflation.

Six years on, we can see that the crutch of low interest rates hasn't done the trick; our economy hasn't been lifted by easy money. What's been lifted is the value of investment assets like commercial real estate, benefiting the wealthy more than the country. For America, interest rates near 1 percent benefit the 1 percent. For most of the 99 percent, there is no difference if rates are 1 percent or 99 percent. In fact, for some Main Streeters, interest rates of 99 percent would be relatively charitable, as payday loans have APRs that often approach 400 percent. Who funds the payday loans and makes the spread between the 1 percent and 400 percent? The rich, of course. It's no wonder that America's wealth gap is widening to epic proportions.

Unemployment has come down, but most households' incomes have barely improved over the past several years. Although the price of gas has eased up, leaving some money in our pockets, healthcare costs are still stratospheric and the fact that most households have little or no savings means that one more shock to the economy could knock even more people down to poverty levels.

The falling commercial real estate market will certainly be in tandem with a drop in residential real estate values. With millions of families nationwide still underwater on their mortgages, this will only compound the challenges of survival in non-1 percent America. Recognizing that difficulties are particularly acute for those residing in low- and moderate-income neighborhoods, American Homeowner Preservation purchases these families' underwater mortgages at big discounts from banks and offers sustainable solutions to families so they can keep their homes.

Low interest rates were supposed to be a short-term crutch, but have instead become the staple of a years-long feast for the 1 percent. It's time for the Fed to end the festivities, remove the crutch and let the partiers take their losses so we can move forward as a nation, all 100 percent of us.