Not even these iconic visionaries, however, conceived (forgive the pun) of the opposite: A total lack of government control in a free-for-all marketplace where regulation is unable to keep pace with reproductive science and the multi-billion dollar fertility-industry that serves some 8 million infertile women in the U.S.

None imagined genetic selection (aka designer babies) for health, gender, intelligence and looks of offspring or children born with up to four "mothers" -- mitochondrial transfer donor, genetic/egg or embryo donor, pregnant carrier and birther, and social/legal mother; nor did they imagine the sale of frozen embryos.

Surrogacy is banned in much of Europe. The United States, however, has no national regulation, just a variety of state laws. In 1988 following the New Jersey birth of "Baby M" to paid surrogate, Mary Beth Whitehead, the New Jersey Supreme Court ruled surrogacy contracts unenforceable. At the time, religious leaders and ethicists denounced the practice. "Surrogacy," said the NJ Catholic Conference, "promotes the exploitation of women and infertile couples and the dehumanization of babies. In short, it traffics for profit in human lives."

Incredibly, despite these objections and the Supreme Court decision, several businesses, such as IVFNJ, Fertility NJ, Extra Conceptions, and Fertility Authority currently advertise surrogacy services in the state.

Hiring surrogates and purchasing sperm, eggs, or others' leftover frozen embryos, have become accepted as choices on a menu of options; a "right" of those who can afford it. Oprah Winfrey and others argue that surrogacy offers poor women the "right" to use their bodies to earn money just as legalized prostitution does. Legalized prostitution, however, involves consenting adults, not the creation of a third, autonomous human being who is contracted for and is not legal within most of the U.S. Furthermore, surrogacy does not provide a sustainable income for the indigent and most American surrogates claim their motive is not financial.

Arun Dohle of Against Child Trafficking is critical:

"Surrogacy is a form of modern day slavery. It has to remain outlawed and not legitimized through "regulation". ... it doesn´t protect anyone, but rather legitimizes the human trade."

Whether for personal satisfaction, altruism, or for compensation, surrogacy risks the life of the surrogate:

• Carrie Mathews of Windsor, Colorado nearly died birthing twins for a couple in Austria and owes more than $217,000 in medical expenses stemming from pregnancy complications.

• Premila Vaghela, 30, of Ahmedabad, India, died due to complications delivering a surrogate baby for an American couple, leaving her own two sons motherless.

Despite these serious issues, surrogacy was casually introduced to American television viewers in 1998, by Lisa Kudrow's character Phoebe on Friends, as a totally altruistic, in-family (as opposed to commercial) gift for Phoebe's brother and sister-in-law. This was followed by normalizing paid surrogacy for hetero and same sex couples on shows like Modern Family, Rules of Engagement, Sisters, Glee, Army Wives, and The New Normal.

Currently a battle over the child ordered and abandoned before birth by Sherri Shepherd plays out while celebrities such as Neil Patrick Harris, Sarah Jessica Parker and most recently Jimmy Fallon and Melissa Harris-Perry have announced the arrival of babies "via surrogacy" as nonchalantly as having a baby "via caesarian section."

India has become very popular for surrogacy because it is more economical for those seeking a child than American surrogacy, but Dr. Harsh Vardhan, the Indian Minister for Health, expressed concern that the thriving, unregulated surrogacy industry "poses a great threat to the country's poor, disenfranchised women." 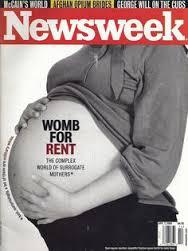 Indian law requires that those purchasing the services of a surrogate accept custody of the child or children regardless of any abnormality. In contrast, American surrogate contracts commonly require "abortion in case of severe fetus abnormality." One wonders where the pro-life outrage is to legal contracts demanding abortion under certain circumstances. Contracts that provide an "out" for those paying for children have led to legal disputes over custody when intended parents chose not to accept "defective" or multiple children:

One such case involves Helen Beasley, 26, who is pregnant with twins ordered by Charles Wheeler and Martha Berman of California, who demanded she abort one of the fetuses because they only wanted one child. Beasley wants to put the twins up for adoption. But under Californian law, parental rights in a surrogacy agreement go to the intended parents, not the surrogate mother.

Other litigation includes a three-year battle for visitation involving a Tennessee woman who conceived a child for an Italian couple.

Even in-family surrogacy can end up in protracted litigation. A NJ gay couple has battled years for custody of twins born to the sister of one of the men who was impregnated using a donor fertilized egg and the sperm of her brother's partner.

Questions for the Future

Many reproductive technologies involve anonymous paid "donors," ignoring the decades of struggle by adopted persons fighting for the right to know their progenitors and medical history, as well as the more recent children of anonymous sperm donors searching desperately for their genetic fathers.

Originally all surrogate births were achieved by impregnating the surrogate mother with the sperm of the intended father or fathers, or with purchased sperm. These are now referred to as "traditional" surrogate contracts. Today, most surrogate births involve a process known as gestational surrogacy where the "carrier" is impregnated with an already-fertilized egg. These children have the advantage of being genetically related to both parents who contract for them and who hopefully will raise them. Both forms of surrogacy, however, exploit the less fortunate and violate prohibitions on trafficking in human lives, particularly the buying and selling of infants.

Adoption is promoted to help orphans and foster children. What effect will creating babies through reproductive technologies have on those children? Adoption also provides some semblance of screening to protect the welfare of the children being transferred, whereas in surrogacy, only the baby carrier is screened for physical and mental fitness, but there is no screening of the intended parents. This opens the door further for pedophiles or other predators to obtain children.

Alana S. Newman of The Institute for American Values, in a compelling essay entitled "Children's Rights, or Rights to Children" concurs, writing:

If practices such as surrogacy and selling eggs are acceptable options for those obtaining a child, are parents equally accepting of their daughters becoming surrogates or selling their eggs? Are these noble pursuits or akin to legalized prostitution? Harris-Perry says the woman she paid to bear her child has become "family" but she refers to her as a "gestational carrier" which elicits a vision of a crate for a pregnant animal.

Will baby-making simply continue in this wild-west fashion? Is having a baby a "right" for everyone and anyone who can afford it, no matter how it is accomplished, with the means determined only by what is possible?