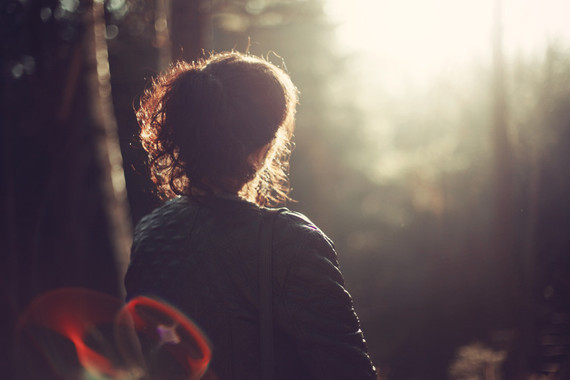 I'm the kind of girl that, faced with the decision between tea and coffee, would rather have a mental breakdown than make a decision. I once had a prolonged argument with my sister because I wouldn't make a decision over which tin of soup I wanted for lunch. (FYI, it was tomato). Even though, most of the time, I always already know exactly what it is that I want, I find it near impossible to make decisions about pretty much every aspect of my life. This, you can imagine, throws up a few issues.

More than anything, my inability to make a decision comes down to my fear of commitment. It is not the long-term prospect of being tied to something which shakes me up inside but rather, the terror that I could have committed to the wrong thing and that there is no way out. The thought that something could go wrong down the line perpetually causes me to halter in my decision making process and rather than taking a gamble and following my heart, I end up in a state of permanent stasis. When you're the boss of your life, it's not the best place to be.

Making decisions and taking commitments, however, can lead to great things in life; the key is changing the way in which you approach the process. Taking small changes in the decision-making process can be incredibly simple and pretty soon, you might find yourself committed to a whole lot of future projects.

Acclimatise
One of the biggest problems when committing to new things is that we dive into the new situation without having thought it through at all. If we feel pressured to go ahead with something, we rarely put much thought into the reality of the situation and focus instead on all of the reasons why we don't want to go through with it. If there's opportunity to change your environment gradually to mirror the new situation, the reality will hit you with much less impact. Doing research into a new project or asking as many questions as you can from people already involved is a great way to gain a true insight into the situation. Inform yourself before you jump.

Look into the future
Whilst you're researching the new project or step, it's a great idea to try and look to the future and predict where it is heading. Things at the stage in which you join them rarely stay the same for long and in business, things are always being propelled forward. The role that you do now or the position that you take at the beginning will alter over time, so the commitment that you make at the start might not be the same for long. Do your research and think about tomorrow, too. It will come sooner than you think.

Ask around
If you know someone already involved in the project or doing something similar, ask them about their experience before and during. Getting the testimonials of a real life experience is perhaps the best way to fully gauge what the experience will be like for you. Although you must eventually make your own decision, hearing how others did it before you can be very helpful when going forward.

The key to good decision-making is good preparation. When committing to something fills you with dread, don't run away from it. Take control, understand it from every angle and make your choice. Pretty soon you'll be dropping decisions like a pro and you will have no trouble deciding life's most impossible questions. Like the age old choice: Kittens or puppies?

Just kidding, no-one can answer that.