It's a serious question, with serious implications. It's a question that arises for me all too often when I see tired faces, confused looks, or disheartened shoulders. It's a question that I feel a responsibility to wrestle with; after all, I've spent the last few years working to make sense of the Core, to put it in language that resonates with others, to make it accessible in ways that teachers won't feel like they're losing the integrity of their classrooms.

Yet, there's a commentary beneath the looks of educators who feel like this is just "one more thing" that "takes me away from my students." And from what I can surmise, the commentary is this.

These are all incredibly worthy grievances, and certainly ones that if realized could set a teacher down the trail of demoralization. Not only that, but for many teachers these objections are reality. Many systems operate without a clear interpretation of the Standards (just look at all the controversy surrounding non-fiction in the ELA strand). For others, there isn't enough professional development. Some are even-handed curriculums so stringent that diverging for even a few days results in professional consequences.

So, the question remains: does the Common Core demoralize teachers? The answer: No, but our misguided or unilateral decisions in the name of Core can. I'm sure we can all point to just such a decision that has had some impact on our classrooms. Yet, I can just as quickly point to the classrooms that are offering ways to make sense of the Core that empower students and teachers alike. Here are a few mantras that help me cool the collective commentary.

• I can let go. I know those days: too much, no time, everything coming with Goliath importance. So I have to let go. Believe me, this is one of my growth areas. But I've learned that it actually isn't so tough letting go of that short story or project, what I'm afraid to let go of is knowing how kids will learn from it or the reaction they'll have. And I'm scared too. I'm scared that I won't recreate "that moment of epiphany" with the new lesson, so I struggle to hang on and get angry at whatever is making me uncomfortable, whatever is making me choose, whatever is making me change. But in confronting this I also ready myself to be a learner again, to challenge myself as a teacher, to begin again.

• Less is more, so go deep. I know it's counterintuitive: the idea that more specificity actually creates more freedom, but I find it to be overwhelmingly true. When I decide to teach fewer things I actually teach more. Rather than lining up lessons as though they're floats in a parade, I find that one clear focus and then attach a variety of skills and texts to it. This video highlights one such example: a grant proposal project that grew out of a research standard and gets my community involved. Going deep on this project actually means they wind up with a breadth of learning that the parade never would have accomplished.

• No degree of standardization will replace the teacher. Perhaps this notion is the first marker on the trail to be demoralized when we don't believe it. But we must believe it, teach it, live it. Ask anyone about their favorite memories of school. How often are they standards or curriculums? Even if it's a beloved project or discipline, you know the answer is always followed by, "And Mr. Teacher made it SO fun!" Our creativity, our attention to students, our autonomy is wrapped up in the certainty that nothing replaces the teacher. Suney Park reminds me of this every time I watch her amazing 6th graders at work during this math lesson. It's Core-aligned, but also full of energy and passion and creativity. 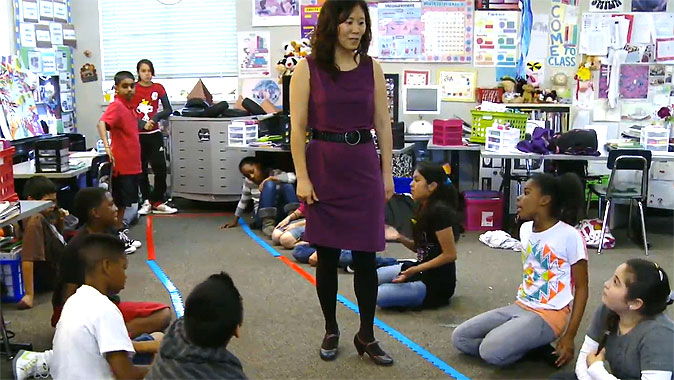 There are facets of this work that teachers just can't control. You can't control the number of students in your classrooms, the resources you're given or the professional support you deserve. But we can control how we prioritize, what we let go of and how attuned we are to the students walking through our doors. Yet, this empowered thinking won't be enough to sustain a profession if our communities don't reciprocate it. I'm never more acutely aware of it when I think about my own school-aged children, in 3rd and 1st grades.

Each day I send to school the best kids I can, knowing their teachers will share that commitment and effort. When I imagine the alternative: sending children to classrooms where the teachers have been placed amidst a maelstrom of discontent without navigation or direction, I don't say shame on them for not making it out of the storm without resource, I say shame on us for creating such stormy winds.

If we want uncommon learning for our children in a time of common standards, we must be willing to lower the voices of discontent that threaten to overpower a teaching force who is learning a precise, deliberate, and cohesive practice.