Everybody loves a bride. Why, women love to see one almost as much as we love to be one, especially a June bride.

Back in the 15th Century, most people got married in the month of June because they took their yearly baths in May and didn't smell too bad a mere month later, the time it took back then to plan a wedding.

Just to be on the safe side and not drive the groom back out the door gasping for fresh air while holding a handkerchief protectively over his nostrils, brides began carrying bouquets of flowers to hide their body odor. That was preferable to the groom's cries of "Oh My God, What's that Stink!" at the alter. Unlike the bride's, his bath had been taken only the day before the wedding. 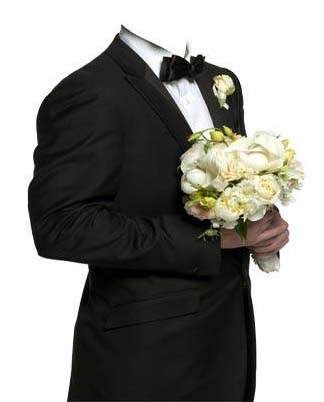 The annual baths themselves consisted of a big tub of hot water. The man of the house got the nice, hot, clean water, then all the other male members of the household from sons to servants, followed by the lowly women and, last of all, the baby. By that time, the water was so filthy, you couldn't see into it and tiny tots could actually get lost in it, hence the expression, "Don't throw the baby out with the bath water." We've come a long way baby.

We can trace the artificial scents of today back to those June brides. Today, about the only thing that smells the same as it always did is the end of the nozzle at a gas pump.

Fragrances are known as the ultimate accessory. Nothing says more about you than the way you smell, say the perfume ads. Trouble is, the scentologists (those who devise new scents) didn't stop there, they wanted everyday things to smell like something else.

Why do we deodorize everything from the cat's litterbox to our own? On some level we must be aware of what's going on in the bathroom, or are we supposed to think the person who preceded us was in there squeezing lemons?

We're bombarded daily with bouncy guilt-inducing ads convincing us we're supposed to smell like a wooded glen, a fresh flower or a tangy fruit. Our hirsute, cave-dwelling ancestors were doubtless a little gamy, but mightn't we have gone too far in the other direction?

On Halloween, we can buy fragrances called Graveyard ("an earthy, dusky scent reminding us of fog juice lingering in the air"), Crypt ("dark and mossy, reminiscent of New Orleans mausoleums"), and Mayhem ("smokey, woodsy scent mixed with spice for a dark night in the woods") at www.gothrosary.com.

They also sell (and I'm not kidding) "Disgusting Smells" such as Seasick, Fromund (smegma), and Chunder (vomit), apparently for repelling all living things.

We can buy wall plug-ins to make our garage smell less like motor oil and more like a field of daisies; underarm deodorant to deceive fellow elevator riders into believing we fell off a citrus truck; shampoo that makes us smell like we live inside a coconut; feline deodorizers to make our cat's litterbox smell like Pina Colada; and gel candles to make our SUVs smell like a sultry Hawaiian evening.

Our refrigerators no longer smell like food, they smell like an arm and a hammer, and when we're ready to throw out the trash, there are scented garbage bags. There's even a spray to make a Hummer smell like a four-wheeled pine cone when it should have the lingering aroma of fine leather and backseat sex. "Here, we know all about problems with car odors," says Jean-Jacques, an employee at a limousine rental agency in Paris. "We clean the car after each client. Often, we do it several times a day. Each client has his own smell and I can recognize some of them with my eyes closed! I refresh the limousine with lime, grapefruit or green apple scents," says Jean-Jacques, adding "I wish some drivers would use cologne."

Speaking of cologne, the most popular with affluent teenaged girls is Ralph Lauren's "Romance," described as smelling like a garden of wild flowers in late summer; flirtatious and sweet ($63.55 for 3.4 oz spray); Givenchy's "Hot Couture" described as a combination of roses, vanilla and spring flowers, a perfect accent to a sophisticated Prom gown ($37.78 for 3.3 oz spray) and Thierry Mugler's "Angel" described as having the sweet smells of chocolate and orchids ($64.58 for 1.7 oz spray).

Most teens usually smell like basketball sweat and rebellion, a far cry from grandma who usually smells like enough gas to knock the entire family into another universe.

There's a powder for vacuuming the carpet so it smells like fresh rain. And we thought it only rained in the living rooms of Orlando. Celebrities like Renee Zellweger and Courtney Cox opt for room scents like Angel Food Vanilla, and Banana Pudding. What, they can't just cook those things in the kitchen?

When we're stressed out, we no longer talk about it with a friend, we opt for aroma therapy.

Why stop there? How about a spray called Horse so we can dream we're on a ranch in Montana instead of stuck in a cubicle working for an insurance company, and Bacon Frying in Kitchen, in case you want a quick sale on your house, or Pheromone, for those who still want to attract the opposite sex even after they've dried up. Daring women can abandon panties scented like strawberry, lemon and lime, and go for something more enticing, like bourbon, scotch and gin.

Perhaps scentologists will one day artificially create the best scent of all -- bread baking in the oven.