In 2003, two students at Konkuk University in Seoul were arrested for engaging in "enemy-benefitting" activity. Evidence of the students' transgression was possession of Karl Marx's Capital, Louis Althusser's For Marx and George Katsiaficas' The Imagination of the New Left. As Katsiaficas notes in his new book, Asia's Unknown Uprisings, "Apparently, the students quoted sections of these books in a pamphlet they wrote and distributed it in a neighborhood slated for demolition."

A little over a decade later, on September 27, 2013, one of Althusser's students, the French philosopher Alain Badiou, delivered the keynote address at a conference in Seoul organized around left philosophy, politics and art entitled, "The Žižek/Badiou Event of Philosophy." Badiou was joined by the Slovenian psychoanalytic philosopher Slavoj Žižek, Chinese language and literature professor Wang Hui and a number of other Korean and international scholars. The conference took place at Platoon Kunstalle, a military bunker/art space located in the plastic heart of Gangnam. The irony of holding an event on communism and Marxism in Gangnam, the zone of gaudy consumerism made famous by Psy, was lost on no one. This irony was compounded by the fact that Gangnam is only 35 miles away from the DMZ and our Cold War neighbors to the north.

In his closing remarks, Žižek asked:

It may appear crazy to talk about communism here in South Korea. Is the divided Korea not the clearest imaginable, almost clinical, case of where we stand today after the end of the Cold War?

Žižek is currently a visiting Global Eminent Scholar at Kyung Hee University where he delivered two lectures to large, enthusiastic audiences. If we were to apply Freud's model of the psyche to left academia, Žižek would be the id, twitching, telling dirty jokes, uttering obscenities, promiscuously combining comments on sex, politics, art, science and popular culture. Badiou would be the ego, offering a calm, steady defense of communism, universality and truth. Which means that the superego would have to be Noam Chomsky, struggling to repress the id with his prohibitions on theory and abstraction. 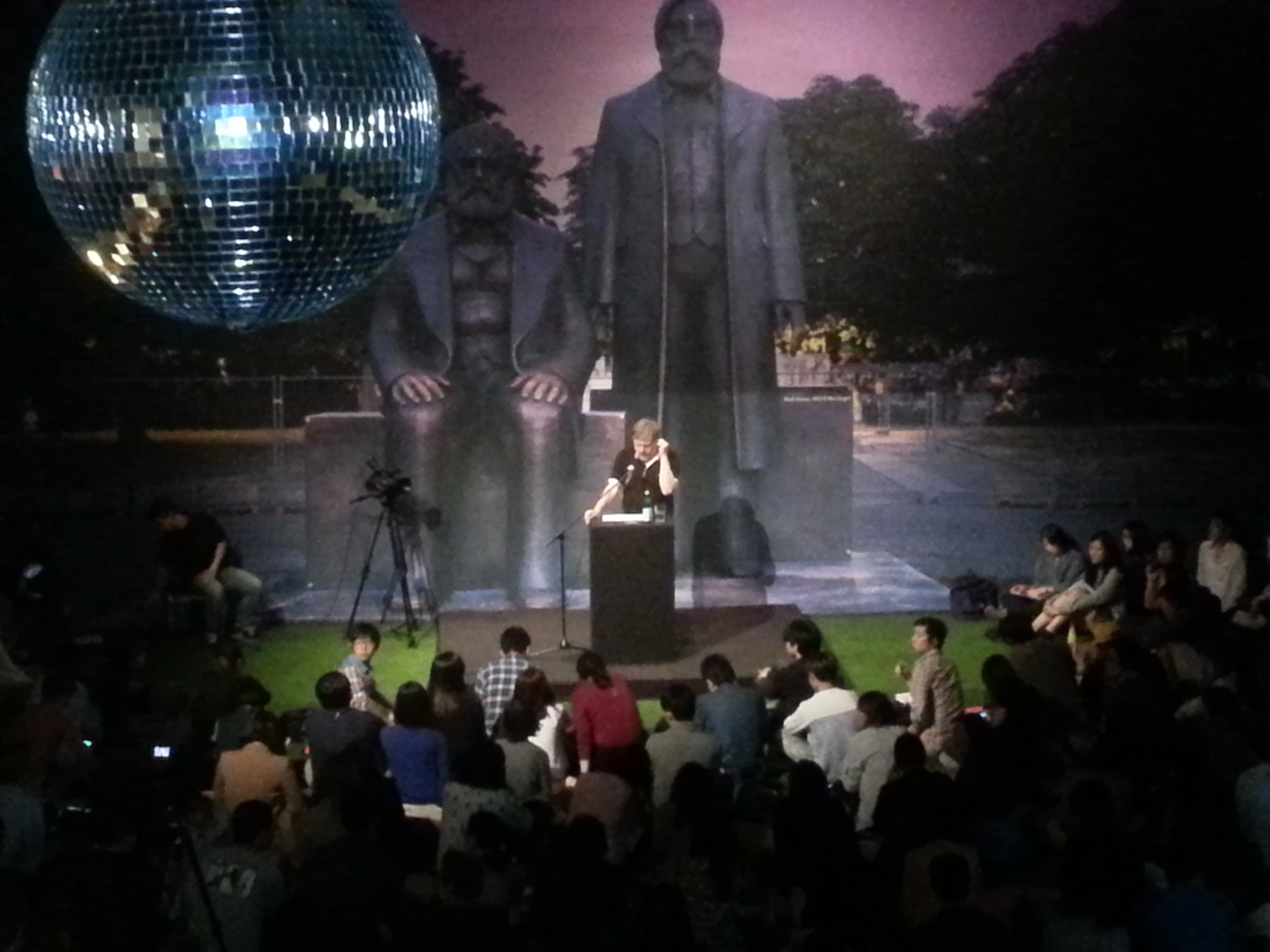 In his keynote address, "Affirmative Dialectics," Badiou, a professor at the European Graduate School, confronted the fact that "to speak of communism is difficult for evident reasons," and asked "if it was even possible to use the word, 'communism,' today." Badiou made it clear that the communist hypothesis, as he hoped to articulate it, has nothing to do with the militaristic, authoritarian state of North Korea. The communist hypothesis simply refers to a political conviction and passion for egalitarianism and human life. Courage is needed in order to invest new meanings in this old word. Only then would it become possible to separate the word, "communism," from its 20th-century baggage.

According to Badiou, classical dialectics begins with a negation in which "the development of the political struggle is fundamentally something like 'revolt against,' 'opposition to,' 'negation of.'" Affirmative dialectics, on the other hand, reverses this logic, "so that the affirmation, or the positive proposition, comes before the negation instead of after it." What is being affirmed is an opening or event that creates a possibility for some kind of radical change: "An event is simply that which interrupts the law, the rules, the structure of the situation, and creates a new possibility." But because we don't have the right words or concepts to understand the event, and only come to understand it after the fact, we miss the momentary opening in which an alternative to capitalism, another world, became possible and things keep going on as they were.

The keywords supporting Badiou's communist hypothesis -- affirmation, newness, possibility, humanity, universality, truth -- are very persuasive. After hearing Badiou, I think even my conservative mother would be convinced to go along with the program. The fact that Badiou is a tall and handsome 74-year-old Frenchman would not hurt the cause, at least with potential comrades like my mother. 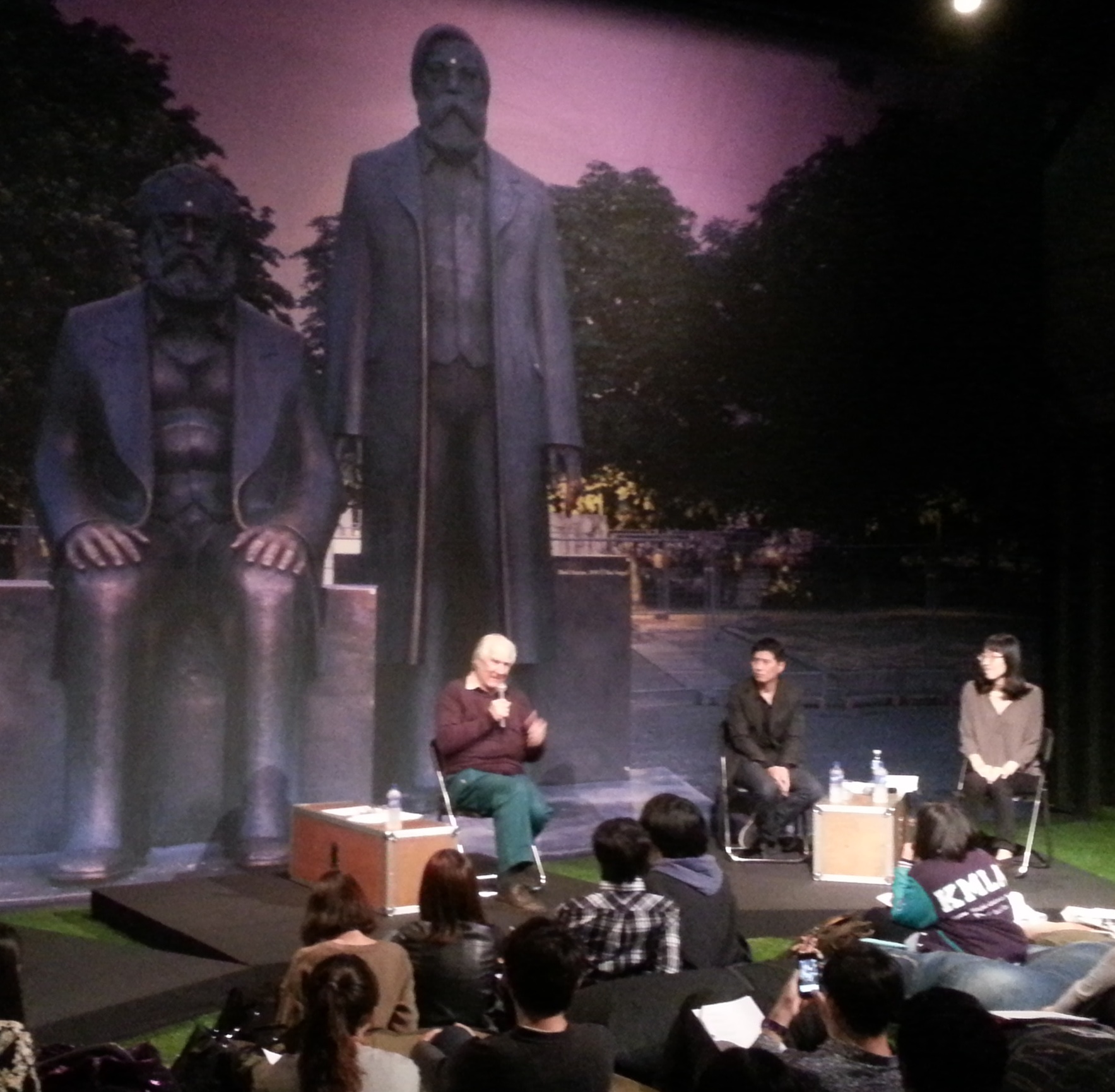 But the question of whether the word, "communism," could ever gain political currency in a place like South Korea -- a place where, to correct Žižek, the Cold War most definitely has not ended -- is crucial. The fact that Badiou, Žižek, Wang and others are in Seoul talking about this word to large, engaged audiences proves that it is possible to talk about communism here. But whether this word could ever move beyond the sphere of what Joshua Clover calls "conference communism" is another question.

Given the fact that South Korea recently elected as president Park Gun-hye, the daughter of former authoritarian president Park Chun-hee, perhaps this is not the best time for the left to be trying to invest this old word with new meanings if it wants to gain credibility. At the same time, the struggle for egalitarianism and communal life has been and continues to be central to Korean civil society. Modern Korean history is punctuated by popular uprisings against colonialism, U.S. imperialism, authoritarianism, exploitation, neoliberalism. Analysis of these uprisings suggests that they involved both affirmation and negation, creativity and opposition at the same time. Summarizing this history in Asia's Unknown Uprisings, Katsiaficas writes:

One of the most significant products of Korea's long and bloody twentieth century is its people's belief in their own power, in their intuitive comprehension of themselves as the subjects and objects of history, and in their rekindled imaginations. People's capacity for collective action stands out as a great legacy of their past struggles. . . The source of these earth-shaking events is a remarkable capacity for popular action -- a gift deeply rooted in civil society.

Even a popular Korean television drama like Queen's Classroom, the story of a group of sixth graders who learn to create a leaderless democracy, end bullying and collectively oppose their teacher, reveals a passionate conviction for egalitarianism (America makes intense dramas about drugs; Korea makes intense dramas about education). Many of the elements of Badiou's hypothesis already have some currency in South Korea. But given geopolitical tensions on the peninsula, and the fact that the current president was elected in part by playing up Cold War paranoia, the word, "communism," is probably not going to be separated from its heavy 20th-century baggage any time soon and most likely distracts from, rather than lends dignity to the struggles it hopes to represent.

"The Žižek/Badiou Event of Philosophy" was organized by Kyung Hee University cultural studies professor Alex Taek-gwang Lee and The Ghost School. Use of Platoon Kunstalle was donated for the event by owner Tom Bueschemann, a genuinely communistic act.