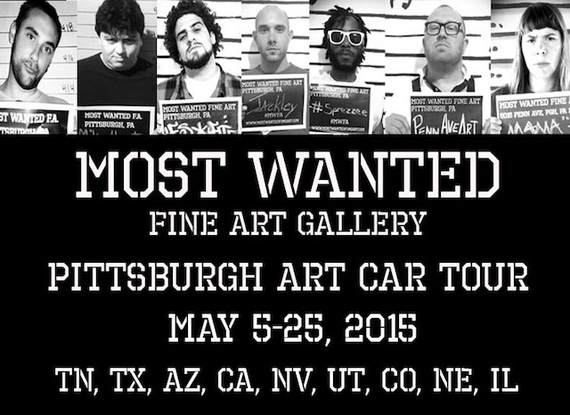 At first, I was skeptical.

My friends at Most Wanted Fine Art (MWFA) dragged a car all around the country, wheat pasting photos of supporters onto the car only to end up smashing the vehicle at a country fair. Then they make art out of the car scraps, selling the art to buy another car. And gear up to do it again the following year (see what I did there?)

Fair enough question. The answer sort of caught me off guard. To the artist behind the Pittsburgh Art Car, it is a symbol of who uses painting to address an old idea: the nature of American identity. His works are influenced by the classic American car culture, auto repair industry, and the Appalachian folk tradition of demolition derby. Working at a family owned junkyard and mechanic shop at a young age, Jason Sauer began to experiment with available auto parts to create early sculptures and assemblages. At the age of 18, he painted a car and participated in The Great Stoneboro Fair Demolition Derby for the first time. This year's derby will be his 20th Anniversary of painting cars, smashing them in the demolition derby, and creating art out of the scrap.

The derby is a form of folkart, an opportunity to fuse the concept of being a "most wanted" outlaw with one of the most common Americana experiences. Says Sauer:

I personally drive the painted car in each Derby, smashing it, and then use its pieces in other works that usually center on "Love letters from Home". My time in the Army gave me a new sentiment of on home - coffee-stained, vibrant, shocking, freckled, sticky finger printed crinkled carried in pockets for years memories. Military, prisoners, and travelers all seem to have a romantic snapshot of love, life, and family in their minds. They romanticize those elements that are just out of their grasp. I try to capture this struggle and ideal in my art pieces. I examine the ideas of love and death, using an American icon, the car, as a surrogate. A reminder of death is a reminder of love.

Creating something with love then destroying it with love to create something else is an act of rebellion in our American society, so focused on defining love by acquisition and ownership. This is something I could wrap my mind around.

MWFA bills itself as a Pittsburgh based community center disguised as an art gallery. The have two exhibit spaces, a printing press, host 14 resident artists, provide job training for individuals recently released from prison, and create yearly art cars. Sauer, his wife and co-artist Nina and their young son Rowdy live above the gallery from where they operate all of these programs. And more.

Most Wanted Fine Art (MWFA) and the Pittsburgh Art Car will travel across the country this May on a 12 city tour to explore public art as a community engagement strategy. The tour is built around the Art Car. They are launching a crowdfunding effort on IndiGoGo to support this project and hope to raise $7,000.

"This tour is about building community with other public artists around the country," says Sauer. "The Art Car creates an investment in Pittsburgh's public art scene and our documentation of the tour will ultimately create a permanent reminder of that relationship."

Each participating artist has committed to creating a travel log of sorts using letters and graphic images that they will personalize for donors to the crowdfund. Indiegogo pledges start at $1.00 in keeping with the gallery's commitment to make art accessible to everyone.

When I think of public art, I think of either galleries or wide open public spaces - murals and bridges and buildings. I don't think of cars, or at least I didn't used to think of cars. A car was something we used to access the art, not an embodiment of it. Maybe a public art outlaw is just the one to shake things up in that experience and help folks like me better understand how I romanticize public art.

Full disclosure -- I am a 2015 resident artist with MWFA. My project focuses on blogging; I'm not involved in the Pittsburgh Art Car project. I'm not going on the tour. But you might see my mugshot wheat pasted onto the car and you might even see me cheering from the stands at the next Great Stonesboro Demolition Derby. And my piece of this tour will be proudly displayed in our home after the derby.