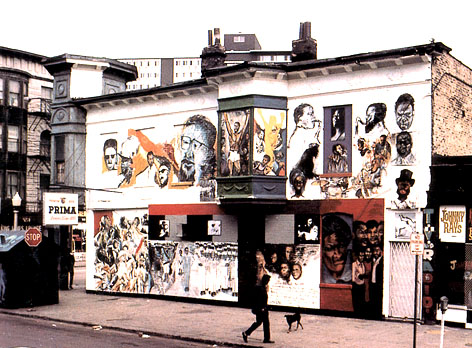 By Kyle McKenzie. Read the article as it appeared in the October '12 issue of Artwrit.

Dave Loewenstein, an artist based in Lawrence, Kansas, is in the process of finishing up a community mural in Arkadelphia, Arkansas. Loewenstein is working with Mid-America Arts Alliance in Kansas City, Missouri to complete a series of murals in small communities throughout the organization's service region. In 2010, murals were completed in Newton, Kansas and Tonkawa, Oklahoma. In 2011, Loewenstein brought his process to Joplin, Missouri only two months after a massive tornado severely impacted the city. This project is a contemporary incarnation of a forty-year-old tradition of trained, often professional, artists working closely with community members to realize a collective visual expression. "When we ask people to participate, it is because we need them," Loewenstein says of his reliance on the communities he works with. "We need their knowledge and experience if we are going to make something authentic and meaningful."

One lineage of the modern community mural movement can be traced back to the South Side of Chicago in 1967. That spring, artists from the Organization for Black American Culture began painting an homage to black heroes on the side of a rundown building at 43rd and Langley. The artists were not commissioned, but worked out of a need to communicate with and about their community. The project came to be known as the Wall of Respect. The mural site became a neighborhood gathering place, and people would come to nominate their heroes for inclusion in the mural.

William Walker, one of the artists central to the creation of the
Wall of Respect
, would go on to co-found the Chicago Mural Group (now the Chicago Public Art Group) along with John Pitman Weber, an organizarion that claims "unit[ing] artists and communities in partnership to produce quality public art and to extend and transform the tradition of collaborative, community involved, public artwork." as their chief purpose. One of the Group's "Core Artists," Olivia Gude described the importance of the project in her own artistic practice and in her work as mentor:

As a young artist I was given the gift of being initiated into a tradition of community muralists that stretches back to the Wall of Respect. Thus, an important part of my artistic practice has been and will continue to be identifying and mentoring emerging artists from the diverse neighborhoods of Chicago and from around the country--introducing these artists to the possibility of creating artwork in a public medium that is both experimental and connected to community.

In the early seventies, as Chicago's mural movement was gaining steam, several community-based projects began to emerge in Los Angeles. As in Chicago, the movement in Los Angeles existed largely as an alternative voice for under-represented communities. Judy Baca, a young Chicana artist, was among those leading the way. "Some works became cultural-affirmation images, asserting only that we exist as distinct cultures," explains Baca. "Others addressed the hard task of articulating and advocating for resolution of issues affecting the places where our people lived and worked." Baca remains a leading figure in the community art world. Her most famous project, The Great Wall of Los Angeles, employed over four hundred young people in a massive community mural effort. It is the longest mural in the world, portraying the history of California from pre-history through the fifties.

The importance of transforming the art space into a space for civic engagement is a thread that runs through most of these artists' work. In March, Loewenstein sat on a Creative Placemaking panel with NEA Chairman, Rocco Landesman, at the Spencer Museum of Art on the University of Kansas campus. "My work as an artist has been driven by the desire to create opportunities for regular folks to re-inhabit the public spaces in their home towns and fill them with images and conversations that reflect their own hopes and dreams," Loewenstein explained. "To begin to re-occupy our visual environment with something more than advertising and sloganeering. And to bring a sense of shared culture, memory, and possibility back to civic life."

Much of the history of community murals is tied up with the struggles of urban neighborhoods. In these situations, the paintings become self-identifying symbols of the people that live there. They act as stationary demonstrations, demanding that neighbors and visitors take note of the community's point of view. Loewenstein's work is mostly found in small towns, including the current M-AAA project. He believes that these murals function as activism. "In most cases we're intervening in a visual environment that is dominated by money and political power," Loewenstein explains. "We inject the voices and stories of regular folks into this environment and we're out on the street doing it in public." When art is for and about the people who are creating it, the design process can engage collaborators in self-reflective discussions. "In some places, the most radical thing you can do is paint a larger-than-life image of someone who has historically been cast off by society due to their race, gender, or beliefs," adds Loewenstein, "or portray an event/issue that has been buried because those in power don't want to address or remember it."

It is understood that outdoor murals are temporary. In a Chicago Tribune article, "Group Fights for Public Art" from February 20, 2002, which was about CPAG's restoration efforts, John Pitman Weber (one of the group's co-founders) admitted, "It's not that every mural needs to be preserved--not every mural is a masterpiece, but some of them are. They're part of the fabric of the city, and there needs to be some foresight about how to preserve them."

Outdoor artworks are subject to the ravages of moisture, sunlight, and graffiti (though the latter is notably rare among community murals). In Chicago's case, the earliest works in the movement, if they survive, are ready for their second or third restorations. Some works, like the few remaining William Walker pieces, are important to maintain, not only for their impact on contemporary viewers, but because they carry an important role in conveying the narrative of the second city's mural movement.

Faced with the prospect of restoring some of his earliest works, Loewenstein has said community murals "should be there as long as the community wants them to be there." He adds that some works may be historically relevant even if the neighborhoods go through significant changes, because they represent the "struggles, dreams, and challenges of people who did live in those places."

The community mural is a courageously contemporary form. As soon as it is completed, some of its power is lost. The community mural process is such that, to those involved in the creation, the real power of the project lies in the process. The finished mural is a trail of reminders, the consolidation of a richly complex web of personal narratives, conversations, disagreements, and shared work. It is so particular to the time, place and community that engendered it, that its communicative powers are somewhat muted or transformed when viewed by passersby. This is not a shortcoming of community murals, but rather it is precisely their point; to be rooted in the moment and the collective body that created them.

An independent publication committed to excellence in art writing