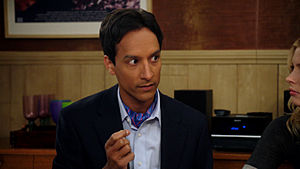 This episode of Community, the fourth of the season, finally does what the show has had the most success at: making fun of beloved television and movie genres. "Advanced Chaos Theory" is a bottle episode during which the characters never leave the room - in this case, they've all gathered in Troy and Abed's new apartment for a housewarming party. The first few minutes set everything up. Troy and Abed, who've read a book on how to be good hosts, lead the guests into their juvenile apartment and set up a game of Yahtzee, and almost as soon as they sit down the buzzer rings to announce the arrival of the pizza delivery man. He can't be buzzed up, so someone has to go down to get it. Everyone touches their noses simultaneously, so Jeff proposes he roll the one of the die to decide who goes. Abed says, "Just so you know Jeff, you are now creating six different timelines." To which Jeff responds, "Of course I am Abed." That scene is replayed six different times as the show exploits a Sci-Fi standard: the alternative timeline show.

Each possible result sends someone different out of the room to get the pizza and creates a different alternate reality. Each scenario has some constants, only what exactly happens and what exactly is revealed to characters varies. In almost every case Britta gets high in the bathroom, though the other characters don't always know it. The pizza guy is always creepy. Two sets of couples -- Annie and Jeff/Britta and Troy -- have sexual tension, it just might not always be obvious to the others. Most importantly, it turns out, Britta starts singing along The Police's "Roxanne," playing on the iPod, and Jeff stops her.

But some things vary. For example, it's generally true that the group has decided not to encourage Shirley's penchant for baking, though we don't quite know why, and in each episode she's baking pies that usually remain uneaten. Something usually inspires Shirley to go check on her pies in the kitchen shortly after the pizza buzzes, and it's usually something that reveals Shirley's frustration with the group and how she fits in. Taken as a whole, we know everything about each of the characters, and we see how each of them affects the group. The most significant timeline is the one in which Troy's sent down: For some reason, Abed doesn't pick up the giant rolling stone that drops to the floor from his Raiders of the Lost Arc replica, starting a chain of events that ended with Pierce dead, Jeff missing an arm, Troy missing a larynx, Annie in a mental institution, Shirley an alcoholic, and Britta with a blue streak through her hair.

There's only one version in which Jeff doesn't roll the die: He tosses it into the air and Abed catches it and figures out that, according to Jeff's system, he would never have to go get the pizza because there are only six sides to the die and there are seven people, with Jeff always doing the rolling. In retaliation, the group sends Jeff down to get the pizza. This is the first time Jeff doesn't have a chance to stop Britta from singing Roxanne, and, it turns out, it's really important that she does. Jeff returns to find them all singing, dancing and getting along, and nothing bad happens. It's one of the few timelines in which that's true. Luckily, we find out this is the prime timeline.

We haven't had a self-contained episode that plays with a genre and group dynamics for awhile, and it's nice to see. It's als really nice to see an episode without Chang.