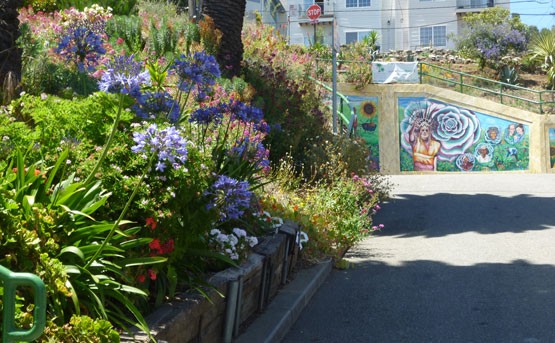 In 2002, two neighbors armed with spades and seeds changed everything for crime-addled Quesada Avenue in San Francisco's Bayview-Hunters Point area. The street had been ground zero for the area's drug trade and its attendant violence. But when Annette Smith and Karl Paige began planting flowers on a small section of the trash-filled median strip, Quesada Gardens Initiative was born. Over the course of the next decade, the community-enrichment project profoundly altered the face of this once-blighted neighborhood.

Jeffrey Betcher is the Initiative's unlikely spokesperson. A gay white man driven to the majority-black area by the high cost of housing elsewhere, he moved into a house on Quesada Avenue in 1998 to find drug dealers selling from his front stoop and addicts sleeping beneath his stairs. He told me about the day that he returned home from work to discover that his neighbor Annette had planted a little corner of his yard.

"Even though there was a throng of people -- drug dealers who were carrying guns, pretty scary folks -- she had planted flowers on this little strip of dirt by my driveway," he told me. "I was so moved by that . . . I thought, that's what life is about. That's what community development is about. That's what's going to change this block faster than any public investment or outside strategy. And in fact it did."

A group of neighbors got together for a barbeque, and Jeffrey -- who has a background in community organizing -- started a conversation about the positive aspects of living in the neighborhood. What followed was a long-term, consensus-based process that resulted in the creation of a series of gardens on vacant land in the surrounding blocks. On Quesada Avenue, the median strip was transformed into a wonderland of Canary Island date palms, bright flowers, and leafy vegetation. Any neighbor who wants to can organize a new gardening effort, take responsibility for the existing gardens, or put together a public art project.

While Quesada Gardens Initiative is not specifically focused around growing food, it does incorporate a food garden used to teach local children about crops, as well as free-form community garden plots. And the way the project uses gardening as a powerful locus of community engagement and empowerment demonstrates an important truth about the social value of food that we seem to have largely forgotten in this country.

A major reason our food system is so damaged -- so dominated by corporate interests, rife with unhealthy products, and unbalanced by unequal access -- is that we too often fail to consider food a social good or to understand that growing, selling, and eating food is by its nature a meaningful social act. What we eat is far more than a pile of commodities. Not only is food's essential job to nourish our bodies, but it can also serve as a creator of quality livelihoods, a locus of community engagement and cohesion, and an engine of citizen empowerment and education.

To improve our system, we must realize and act on this fundamental truth. Most of the industrial food corporations do not. Their central motivation is profit, and the highest profit apparently comes from treating food as a product like any other -- a plate full of widgets that can be engineered, created, priced, marketed, and exploited.

Luckily, a growing number of people concerned with the origins and impacts of their food are rejecting this materialistic and one-dimensional view of what we eat. Projects and organizations all over the country are putting food back into the social context it has traditionally inhabited.

For example, companies and cooperatives that supply local food to an area's population strongly demonstrate that food is central to community cohesion and to local economies. In school garden programs, students learn the complex processes and intense collaboration that go into making what they eat. Projects that help underserved populations like refugees and inner-city residents grow produce help make food once again a central concern of family and community life.

Quesada Gardens Initiative reflects the power of growing things to bring a local community together in a powerful way. Jeffrey made this point as he took me on a tour of the garden plots dotted amongst the houses and stores of the surrounding neighborhood.

Quesada Avenue, the block once known as the most dangerous in the area, has been transformed completely and now serves as a hub of community life. At the top of its hill, Jeffrey showed me the beautifully designed food garden for educating kids. Behind the chain-link fence, stalks of corn stood at attention beside a glowing patch of leafy greens.

At another garden a few blocks away -- a patchwork of small plots that had previously been an improvised trash dump -- a sandbox and rope swing indicated that the garden was for more than growing food. Kids, in fact, had painted the signs that ringed the garden's perimeter with such slogans and quotes as "Don't dump on my garden" and "If you want to change the world, start in your own neighborhood - Harvey Milk."

Quesada Initiative's success arises from the project's appreciation of gardening as the means to an end more profound than a harvest of lettuce and peas. While the plants produced are of course a key motivation for any gardening enterprise, growing food can also -- should also -- serve other important social purposes, like cultivating a culture of civic engagement and an ethos of community participation.

"The change that we've created is not about the garden, it's about the gardeners," Jeffrey told me. He stopped to greet a neighbor as we rounded the corner back onto Quesada Avenue. As we continued on our way, he smiled at me with satisfaction.

"We realize we have done something right here," he said.

Katherine Gustafson wrote this article for YES! Magazine, a national, nonprofit media organization that fuses powerful ideas with practical actions for a just and sustainable world. Katherine is a freelance writer and editor based in the Washington, D.C., area. Her first book, Change Comes to Dinner, about sustainable food, was published this month by St. Martin's Press.