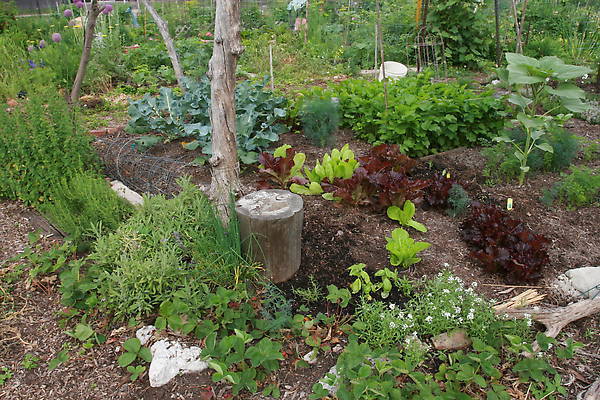 Blank slates make for easy planning. Awareness of ecological richness confounds the process, creating conditions for innovation. The purpose of this essay is to complicate the planning process for the new Chicago Theological Seminary building to be constructed on the south campus of the University of Chicago. When the larger urban ecology is made visible, this project becomes at once problematic and full of promise--ripe for elegant design solutions.

In May of last year, the University announced it had entered into an agreement to purchase the CTS complex at the center of its campus. It plans to use the structure to house the Milton Friedman Institute (a name that provoked intense controversy, even before the economic crisis sharpened questions about the wisdom of unregulated markets). As part of the agreement, the University will build a new facility for CTS. According to the CTS website, the seminary will move in 2012 to a new building at the southeast corner of 60th Street and Dorchester Avenue:

Overlooking the scenic Midway Plaisance, the planned facility will feature a LEED-compatible "green" design by Dirk Danker of Chicago-based Nagle Hartray architects. Plans call for a four-story, 75,000-square-foot structure capped by a green roof. A semi-circular, glass-enclosed chapel and meeting space will provide a welcoming setting for worship and gatherings. The lower level will accommodate future expansion.

Earlier this month, the University informed neighborhood residents who participate in the community garden located at the northeast corner of 61st and Dorchester that "construction staging" for the CTS building "will necessitate clearing the current garden site after the 2009 gardening season." This information was conveyed in a letter from Sonya Malunda, Associate Vice-President for Civic Engagement, to Jack Spicer, coordinator of the community garden.

Gracious in tone, Ms. Malunda's letter notes that it has been understood from the start that the gardeners' use of University land was provisional: "though we have been pleased to make this property available to the gardeners, we have all known this to be a short-term situation." On behalf of the University, Ms. Malunda offers to work with the gardeners to find a new location.

No one questions the generosity of the University. Clearly, Ms. Malunda and her colleagues recognize that the community garden is something more than a vacant lot awaiting development. Yet questions persist. Are University planners properly valuing the garden as an asset (to the U of C as well as the community)? What are the costs of relocating it? What will be lost? Is use of the garden site for construction staging an operational necessity? Are there alternatives? Do these questions of competing values and operational logistics appear in a different light, if the planning unit is enlarged to include the entire block?

Gardens are at once fundamental and elusive: fundamental in that they sustain life and are rooted in the deepest substratum of the human imagination; elusive in that they are seasonal, dormant for extended periods, and difficult to make fully visible as institutions. At 61st Street, gardeners come and go, singly and in pairs, during the day, the week, the season. Different plant species grow and ripen at various times. At any given moment, apart from peak growing season, it is difficult to bring the full reality of the garden into focus. As winter now yields to spring, the garden looks unkempt, even derelict. It takes a sustained act of imagination to comprehend how deeply cultivated it is. To see the density and intensity of attention invested in every square foot. The quiet drama of natural vitality given form by human care. The tangled roots of history, custom, and identity that make a particular place on the earth distinctive, nourishing, a means by which people know who they are.

In her letter, Ms. Malunda notes that the garden topsoil "has benefited from years of preparation" and offers to relocate it to a new site. Topsoil is an apt metaphor. The garden is, in more ways than one, a well-composted place. The question is whether the social and civic values woven into the site, qualities that have grown ever richer and more intricate over the years, can simply be scooped up and relocated. 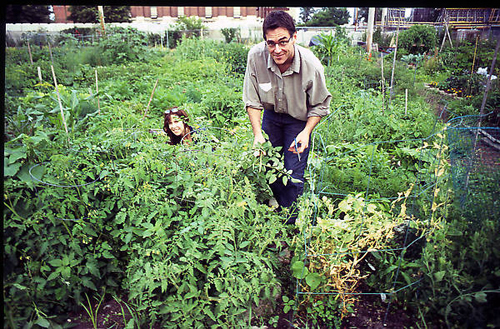 Originally a parking garage, the structure at 61st and Blackstone was acquired in the 1970's by the Resource Center, the major independent recycling operation in Chicago, which used it as a drop-off site. At that time--indeed, until recently--61st Street marked the border between worlds, a border drawn with double strokes of race and class. To the north: Hyde Park and its central institution--the University of Chicago. To the south: Woodlawn, one of the poorest neighborhoods in the city.

In 1986, with the assent of the Resource Center, Mike Fowler, who would later establish E-Z Tree Recycling, began to garden on land immediately to the north and west of the building. To the north, he experimented with intensive cultivation of corn. To the west, he planted apple and apricot trees and established a vegetable garden. Soon he was joined by about a dozen other gardeners; many of them residents of Woodlawn.

Among the gardeners were Dan Peterman, a conceptual artist, and his wife Connie Spreen, a doctoral candidate in French literature. In 1995, Peterman and Spreen purchased the site from the Resource Center. Over time, the building and grounds evolved into a unique facility--universally referred to as "61st Street"--in which artistic and intellectual endeavors shared space with practical activities. In addition to Peterman's studio, tenants included The Baffler Magazine, a wood working shop, a bicycle coop staffed by Woodlawn youth, an organization I directed composed largely of former gang members, and an auto mechanic.

Over the years, the community garden continued to mature, as did the mix of gardeners. By the late 1990's, there were roughly twenty-five individual plots. Peterman coordinated the site. He oversaw the construction of paths for navigating between plots and established a well. To the north of the building, he and Spreen started an orchard; among the trees they planted were cherry, peach, plum, apple, Asian pear, and quince.

Then, in 1998, the garden was threatened by plans to expand the neighboring public school, the Andrew Carnegie Elementary School. The City sought the land dedicated to the garden for a new wing of the school. After extended negotiations, an agreement was reached under which Peterman and Spreen received compensation and a small parcel of land immediately south of the building in exchange for the garden.

In 1999, the University agreed to make available to the gardeners the site across the street on the northeast corner of Dorchester and 61st. Almost a decade has now passed, and the garden, under the gentle stewardship of Jack Spicer, has thrived. It has grown to 143 plots, embracing 130 households (with more on the waiting list), while maintaining its mix of gardeners. It has remained a border institution: common ground shared by residents of Woodlawn and Hyde Park.

Meanwhile, on the other side of 61st Street, an intense drama was unfolding. In 2001, fire consumed 6100 South Blackstone. All that survived were the exterior masonry walls; everything else was destroyed. The story of the fire and its aftermath, a narrative of loss and renewal, at once grim and heartening, must await another day. For the moment, suffice it to say that Peterman and Spreen summoned the resources and will to reconceive, redesign, and reconstruct the building. Borrowing a term from Frank Lloyd Wright, they renamed it the Experimental Station.

Today the facility is alive with programming and activity: the 61st Street Farmers Market, Blackstone Bicycle Works, the Invisible Institute, and Backstory Cafe. And it is the venue for a wide array of community events, ranging from wood-fired bread bakes to conferences on human rights journalism, from jazz concerts to encounters with writers.

During the hard years of grief and rebuilding, the institution of the garden grounded and sustained the community that had formed over time at "61st Street." Absent the garden, it is doubtful the Experimental Station would exist in the form it does today.

If the garden can be said to be an important civic institution, the Experimental Station can be said to resemble a garden. To list its programs and the events that take place there tells only part of the story, just as an inventory of plants does not tell you what a garden is. A deep coherence underlies the eclectic activities of the Experimental Station: an ecological vision that values robust diversity over monoculture and is animated by core principles of generosity and hospitality. It is a cultural institution that takes us back to a root meaning of "culture"--a nourishing habitat. 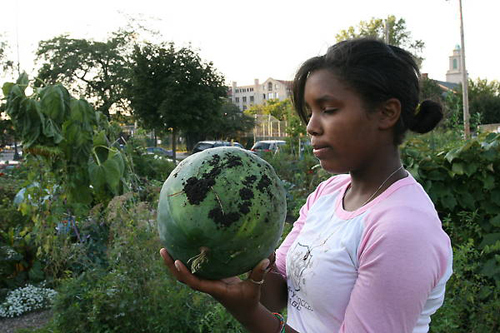 A central theme emerging from this fertile mix focuses on food culture: the constellation of community garden, farmers market, wood-fired bread oven, and cafe has established the conditions for active inquiry into the practical requirements of sustainable local food systems. In this time of economic distress and uncertainty, of massive dislocations and strenuous adaptations, this ongoing investigation will yield knowledge with direct implications for public policy.

At the same time, these linked initiatives have enlarged the ground for civic integration. They constitute welcoming and convivial public space where those long kept apart by fear and folklore, can become, in the deepest sense, neighbors.

Both the University and CTS have, in somewhat different idioms, declared their
commitments to "sustainability" and "civic engagement." At the corner
of 61st and Dorchester, these themes are not abstractions. They are
daily practices with rich histories. The question of the fate of the garden is thus not
only an issue of proper regard for a community asset. It bears
directly on the mission of each institution.

Consider the larger geography in which the community garden and the
Experimental Station are embedded and to which the new CTS building
will be added. Extending from 61st Street to 61st Place, from
Dorchester to Blackstone (effectively the Illinois Central tracks), it
embraces the U of C Press Building, the Steam Plant, the
recently-constructed "Chiller" plant, and the Carnegie School.

Here,
compliments of Google Earth, is an overview:

Although somewhat dated (it shows the now-completed Chiller under construction), this image is suggestive. It invites a design process that addresses the larger ecology into which the CTS building will be introduced rather than one narrowly focused on the individual construction project. The latter course would almost certainly yield a wasteful, avoidable, and painfully ironic outcome: construction of a new, state-of-the-art, green seminary building at the north end of the block that does injury to the life-supporting diversity and complexity that have taken hold at the south end of the block.

By contrast, if the scope of the planning process were enlarged, a range of intriguing possibilities would come alive. Such a process would build upon rather than undermine the powerful design coherence that now exists along 61st Street--the complex of elementary school, garden, farmers market, bike shop, cafe, and so on. And it would orient south toward Woodlawn as well as north toward campus, establishing a gateway that would invite neighborly movement in both directions.

Is such design elegance possible? Can the University and CTS realize this opportunity to advance their commitments to sustainability and civic engagement? I do not presume to have command of the range of factors the planners and architects must ultimately reconcile, but I believe these are the right questions. The necessary questions. And they are at hand.