24/7 Wall Street: This summer, thousands of fast-food workers in the United States went on strike in cities across the country, demanding their wages be increased to $15 an hour and the ability to unionize. To no one’s surprise, they didn’t get it. As of 2012, an estimated 4.7% of hourly workers are paid at or below the federal minimum wage of $7.25 an hour. According to several groups, low- and minimum-wage workers are growing faster than any other group of earners.

Meanwhile, profits at many of the corporations that employ the most minimum-wage workers have risen. McDonald’s, Walmart and Target together employ several million Americans. While these companies’ profits have grown in recent years, most of their workers continue to earn low or minimum wages. 24/7 Wall St. identified the 10 companies that employ the most low- and minimum wage workers.

Companies that pay employees poorly fall into one of three industries: retailers such as Walmart and Sears, restaurant chains such as McDonald’s and Yum! Brands, and grocery stores such as Kroger. These industries are customer-facing and rely on a fleet low- and minimum-wage workers to take orders, stock clothing and goods and wait tables. “The service sector across the board — the retail and restaurant industries — those are the core of the low-wage labor market,” explained Jack Temple, policy analyst at the National Employment Law Project (NELP).

Perhaps a fairer measure that may indicate whether a company can afford to increase its employees’ wages is the profitability of these companies. Net income in all but one of these companies has increased over the past five fiscal years. Kroger’s net income more than tripled since fiscal year 2008 to nearly $1.4 billion. Sears’ net income, on the other hand, has declined significantly during that time. The company recorded a net loss of $930 million this year.

Temple explained: “Low-wage companies have choices. They can continue making a lot of profits, and can continue paying their CEOs an incredible amount of money by paying low wages to their employees. But they have the resources to operate profitably and pay high wages as well.”

Based on the methodology used by the National Employment Law Project in its 2012 report “Big Business, Corporate Profits, and the Minimum Wage,” 24/7 Wall St. identified the 10 companies in industries that are primarily low-wage employers. Based on annual reports and proxy filings, we also reviewed the total size of the companies’ workforces, the recent performance of the corporations in terms of revenue and profit, and the highest executive pay at these companies. Included in our analysis were total U.S. employee figures, which we estimated when the figures were not provided by the company. In keeping with the NELP methodology, all employee figures represent systemwide employment, including employees of franchisees. To avoid double-counting low-wage workers, Starbucks is an exception, as many other low-wage employers are Starbucks licensees.

These are the companies paying Americans the least: 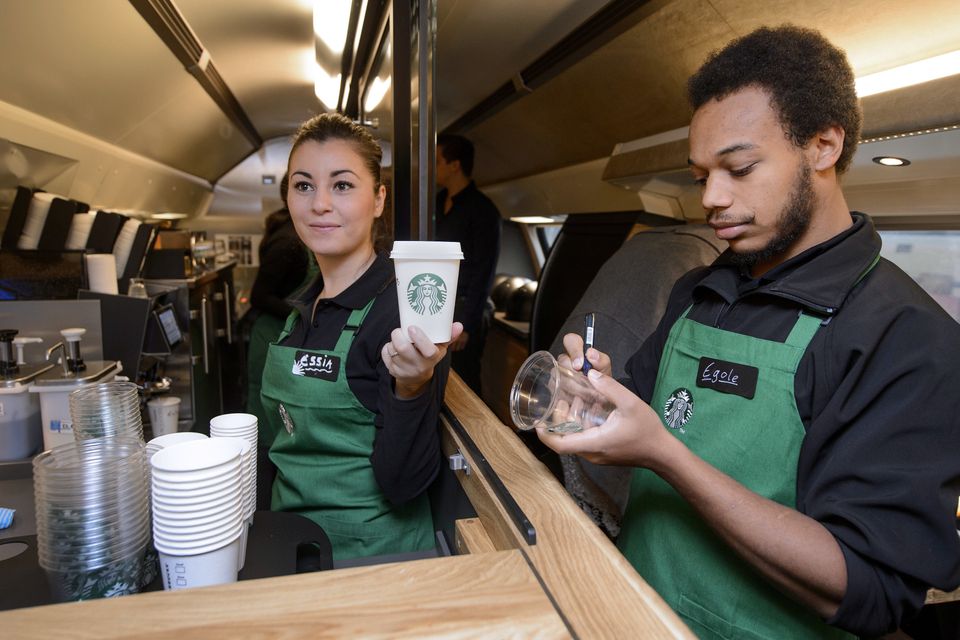 1 / 10
10. Starbucks
<b>U.S. workforce:</b> 120,000 <b>CEO compensation:</b> $28.9 million <b>Revenue:</b> $13.3 billion <b>Net income:</b> $1.4 billion <b>No. of U.S. stores:</b> 5,415/7,049/13,493 Starbucks Corp. (NASDAQ: SBUX) employs 120,000 workers across the United States. Howard Schultz, the company’s CEO, has become a billionaire by turning Starbucks from a small coffee retailer into one of the world’s most famous brands. Last year, Schultz took home nearly $29 million in total compensation. Schultz is often viewed as a progressive executive, due to his support of gay marriage and his request that customers not bring guns into Starbucks locations. In an interview with CNBC in March, Schultz cautiously supported a minimum wage hike. However, according to Glassdoor.com, baristas at Starbucks are paid an average of less than $9 an hour. Schultz has downplayed the relevance of these figures.
Getty Images